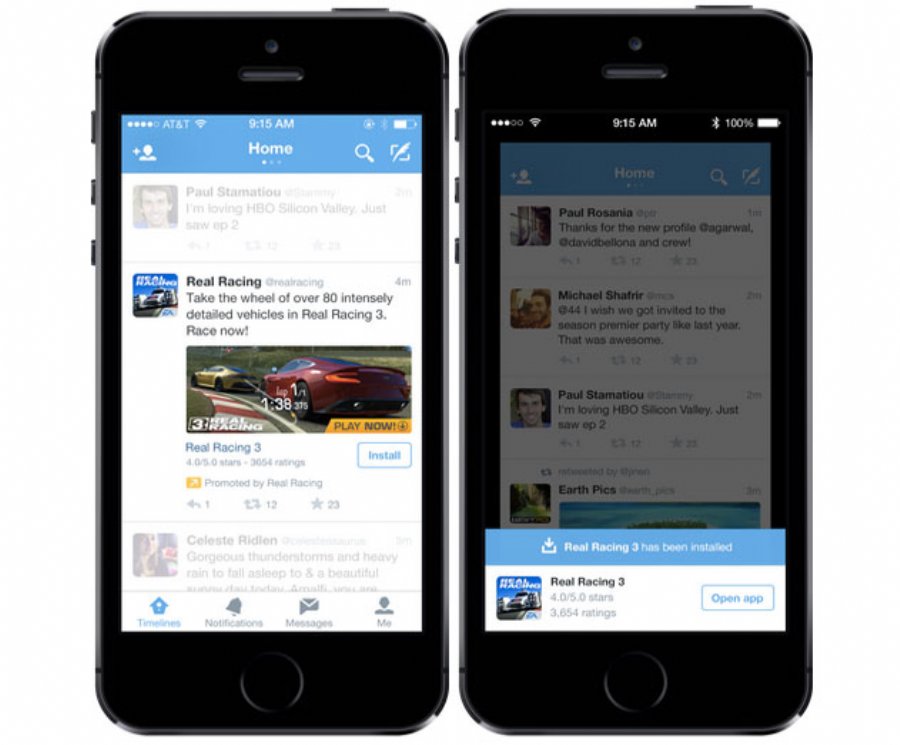 
10,405
Announced earlier this year in beta, Twitter’s new mobile app promotion platform provides the ability to create promoted tweets that link directly to the Android and iOS app stores, where users can then download the app immediately.
The platform leverages Twitter’s existing targeting capabilities, including interest, keyword, TV targeting and tailored audiences to help developers and publishers reach their desired audience. The program also provides the ability to layer on gender, geo, language and mobile platform targeting to pinpoint the users who are best suited for an app.
Once targeting has been set, Twitter offers different ways to customize the creative aspects of an ad using Promoted Tweets and App Cards, including:
- The ability to automatically use an app’s icon and description from Google Play or the App Store, or customize them.
- The ability to deep link to enable users to open an app directly from Twitter; and
the ability to customize Tweet copy to provide additional context about why users should download an app.
- App Cards on iOS will also include install notifications, a prompt that occurs on Twitter once an app is fully downloaded. The notification is designed to drive activation of an app when user intent is highest.
Once ads are running, Twitter provides conversion tracking for mobile apps, which provides the ability to measure the full conversion impact of campaigns, including initial installs and in-app conversion events. Twitter has partnered with several companies to help see how engagements and impressions on Twitter drive app conversions including Adjust, AD-X, AppsFlyer, Fiksu, Grab, Hasoffers and Kochava.
Twitter is introducing a new pricing and prediction structure for mobile app promotion, based on a cost-per-app-click (CPAC) model. Developers will only be charged when a user clicks to go to the App Store or Google Play from an ad, or when they open an app directly from Twitter.
Developers can set up and run mobile app promotion campaigns directly from ads.twitter.com, or through their Ads API partners, which specializes in managing mobile performance advertising campaigns at scale.