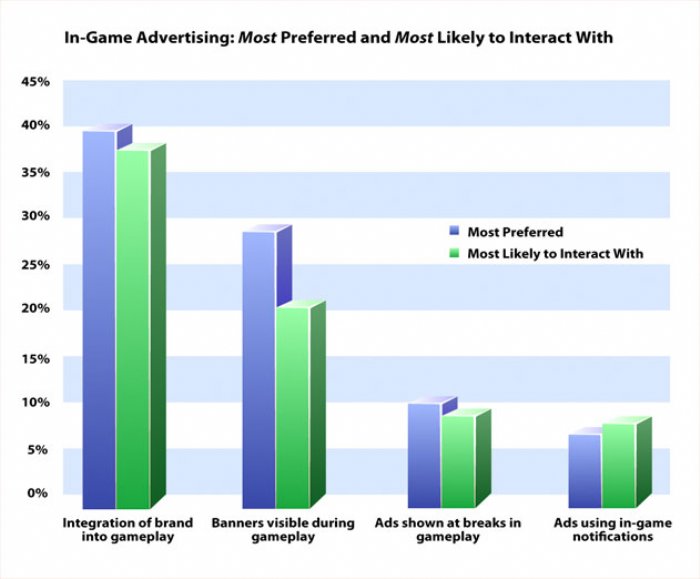 
10,593
Should developers worry about how much ad breaks during gameplay affect their mobile game usage? Maybe so, according to recent research by MediaSpike. According to the company’s recent study, ads at breaks in gameplay are generally disliked, with gamers preferring ads integrating brands into actual gameplay.
The study showed that ads shown at breaks in gameplay fared the worst, with just 11 percent of respondents preferring this format and 36 percent declaring it their least preferred. Ad banners ranked above ads at breaks, being preferred nearly 3-to-1 (29 percent to 11 percent). Mobile gamers reported they were twice as “likely to interact with” a banner ad (21 percent) compared to ads at breaks in gameplay (9 percent).
The format most liked, according to the research, are those that involve the integration of brands into the actual gameplay. Ad campaigns of this type were most preferred (40 percent of respondents) and most likely to be interacted with (38 percent of those surveyed). In addition, when asked which would be the biggest factor determining whether an ad would be liked, the clear winner was when the ad doesn't interrupt the game or "feel" like an ad.
The research was conducted by MediaSpike in partnership with Interpret, a consumer market research and consulting firm. The study was conducted in June 2014 and assessed mobile gamers’ opinions, reactions to and preferences around in-game advertising formats. The 200 male and female gamers surveyed were aged 18-49 and were recruited through online panels. They had to own a smartphone and/or tablet and play games at least once a week on those devices.