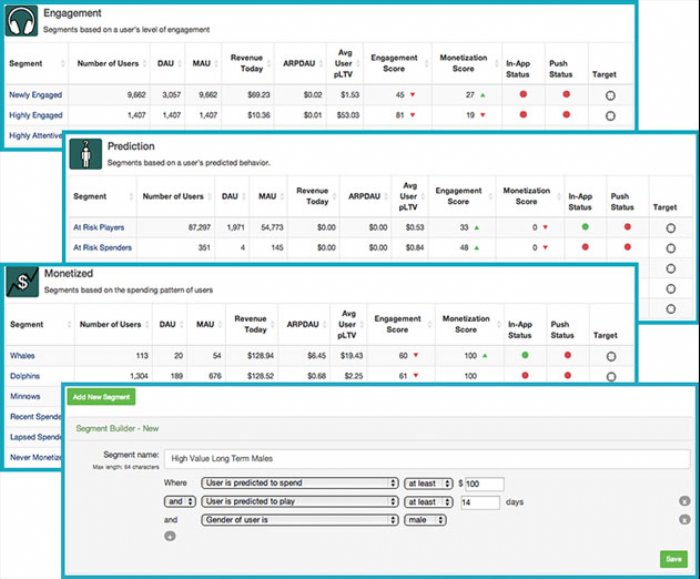 
2,349
Add the small screen and big data together and you get the potential to transform how app developers interact with their app users.
Playnomics has launched another salvo in helping developers understand user behavior with its User Segmentation Service (USS) which utilizes the company’s big data technology as a service to the developer. The USS API allows lower level access to user segments so that developers can further enhance apps and bring personalized experiences to each individual user.
Developers can utilize Playnomics’ analytics, data science, and segmentation through a dynamic API. By segmenting and predicting user behavior, developers can better understand what makes users tick and encourage activity that will promote engagement, improve retention, and increase monetization.
App & game developers can adapt user experience using their favorite tools including email and in-app messaging. Playnomics collects key behavioral data points, specific to an app or game, to build highly valuable segments of users. Developers can use these segments to consistently provide users with highly relevant and engaging content. Doing so will result in increases across key performance indicators, including return rate, ARPU, and more.
Ad Networks, exchanges & DSPs can use Playnomics segments and user data to augment bidding and buying of ads. Ads can become more highly relevant and targeted so that the audience will care about and engage with the ads which will help improve eCPC and eCPA and increase ROI.
Key features of USS include an API that returns a list of users and their corresponding segments. Developers can use of Playnomics’ PlayRM behavioral and predictive segments and all corresponding metrics as well to build unique segments that meet specific needs with Playnomics’ Custom Segment Creator.
USS allows developers to utilize email to target users with segmented and personalized emails and re-engage users who have lapsed from an app, or encourage further engagement of current users by using Playnomics’ segmentation.
Developers can also use their built in-app messaging system, or other third party tools, while utilizing PlayRM’s segmentation to provide relevant and targeted in-app messages. Developers can identify users that are about to churn and provide them with content that will prevent them from leaving.
Utilizing adaptive gameplay developers can direct a user down a certain route of gameplay, based on the content they have enjoyed. With Playnomics’ segmentation and API developers can reveal or enable selected content or experiences based on a user’s segment, to help further encourage and direct behavior.
Using USS to feed dynamic segment information into an ad server allows developers to differentially show ads to users to make sure the right audience is seeing an ad. Segment ads (or no ads at all) to VIPs and whales while providing different, yet relevant ads to non monetizing users.
Playnomics’ segmentation technology accesses key user data (ex: how often a user returns, how long each session is, and how much they spend) and builds segments of users that fit a developer’s specific needs. Use custom events and Playnomics Custom Segment Builder to create segments around milestones important to an app, such as level completed, win-loss ratio, or item owned. Using API calls, a list of users and corresponding segments will then be returned, ready to be used.
Examples of segments include those based on where a user falls in their lifecycle. Are they are on their third day since they launched the app for the first time? Eight days? Have they not played in two weeks and lapsed out?
Behavioral segments are based upon a user’s in-app or in-game behavior. Examples include highly attentive or even highly intense users. Playnomics recommends combining behaviors with additional data points to create even more valuable segments.
Segments based on a user’s predicted future behavior are available through the Playnomics prediction engine which will evaluate every user and predict their lifetime value (over the next 90 days) and even the likelihood of that user churning. Examples of segments include likely whales, at risk users, and safe to advertise.
Segments to enhance monetization can be created based on the spend patterns of users. Examples include whales, recent spenders, or even lapsed spenders. By default, Playnomics segments users by their last 90 days of spend behavior, however this can be adjusted to reflect an individual developer’s needs.
Segments can also be based around any demographic information that a developer provides about users. This includes age, gender, device information, and geographic location. Developers can also build custom segments that combine different data points and types, including custom in-app events that are choosen to track.
There are two pricing options for the USS service, including a monthly fee based on the number apps, or a cost per data call.
To get started, a developer will create a PlayRM account & a new application and then integrate with Playnomics via their SDK or Server to Sever. Developers can then begin sending data to Playnomics and using their individual Playnomics API Key to make calls to receive user segment information.
To learn more visit the link below.