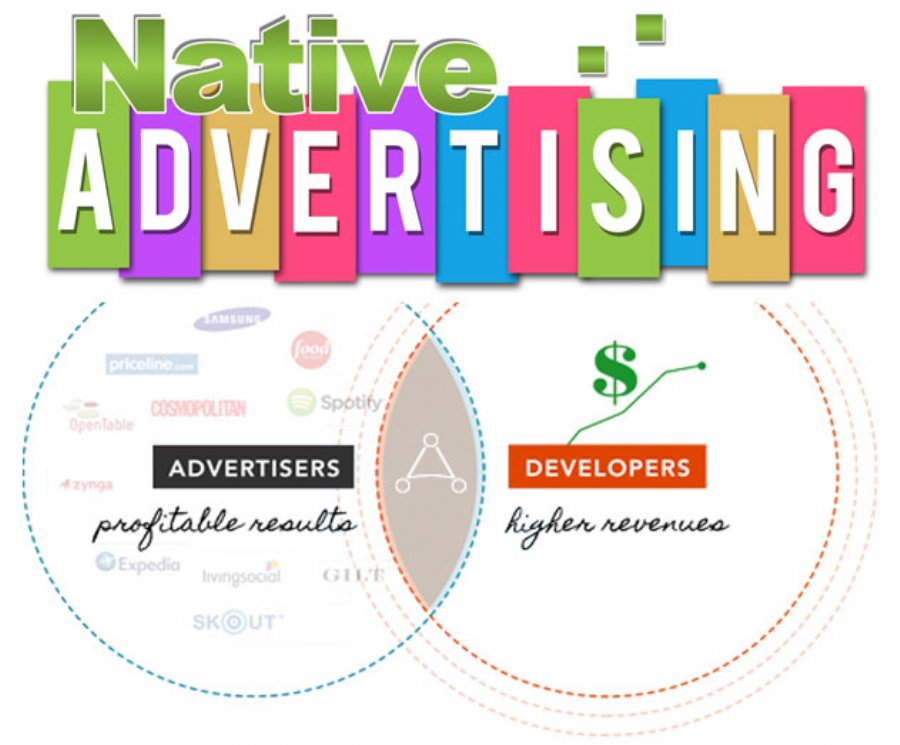 How to Tap into the Native Advertising Jackpot


16,998
Native ads have already taken over billions of dollars in ad spend, and as one of the fastest growing areas in advertising, they’ve only just gotten started.
Publishers like Yahoo and Facebook are bullish on native ads, and for good reason. Yahoo found that native ads get a 3.6x lift in attention over their standard counterparts, and most of Facebook’s $7.9B in ad revenue came from native ads on desktop and mobile.
Advertisers love native, too. Nearly two-thirds of marketers said they’re increasing their native ad budgets, according to a 2015 survey from the Association of National Advertisers. eMarketer projects the market for native ads will be worth $5B by 2017.
Even consumers “like” native (as much as a consumer will ever “like” an ad format). Yahoo’s research found that 60% of consumers “feel positive about native ads.”
The native ad format is a win-win-win, and it’s even better suited for the flow of a mobile app than it is for a traditional desktop website. Below are tips for developers and publishers for integrating native into their apps so that they can tap into a new market worth billions.
1. Stay user-first
Throughout every step of the native ad development process, you need to think about the user experience first. This is key to creating the native ad experience; otherwise, you’ve just given them another big banner ad to look at. Everything - from the frame to the design to the frequency to the timing - should keep the user in mind.
2. Frame & design it organically
In order to allow the ad to flow seamlessly in your app, be sure to frame it within your existing design and content. This tip might seem obvious, but it’s crucial. A good native ad will naturally mesh with the rest of the app so that the visual experience is as fluid as possible and minimally disruptive to your users. Pay attention to the details by ensuring the fonts, colors and spacing align with the visual experience.
3. Be strategic about frequency and timing
Pay attention to your analytics. There will be times when native ads will be more effective. Work with your ad platform partner to vary the ads to ensure that you aren’t impacting user experience with irrelevant messages. If a user sees the same native ad over and over in your app without much time passing in between, they’ll become annoyed with both the brand in the ad and you. But, if your users are seeing a variety of ads from brands they are interested it can help increase engagement and interest.
4. Native is about more than looking native - consider context
In every ad format, placement and context matters. You could argue this is especially true for mobile advertising, and doubly so for the native mobile format. It’s not enough to place native ads that look like they are part of the experience - they need to be part of the experience.
Truly native ads work for everything from gaming to security apps, when placement is thought of as part of the experience. For example, when a user completes an action and is taken to the next screen of content. On that screen, she can be served an ad for another game or product. The key is that ad is in your app’s native design and language - so the ad looks like it’s more a part of the content she is viewing and in turn actually recommended for her.
A real world example includes Cheetah Mobile, which offers mobile tools for Android like CleanMaster, an app that cleans, optimizes, and provides security. At the end of last year, Cheetah Mobile had over 396 million mobile monthly active users. Its CleanMaster app is a great example of how to integrate native ads. It places them after users complete actions such as “Boost” (which increases their phone’s battery life) or “Clean” (which cleans the phone’s junk files).
This makes the flow natural while also giving advertisers the undivided attention of the users. Again, the experience is a win-win-win.
Native ads are a massive market on mobile that can’t be ignored. 63% of companies are increasing their native ad budgets this year, and research firm Statista thinks the market could be worth $8.8 billion by 2018 (Adweek). With these tips, you can start adding another stream of revenue to your app and begin tapping into this highly lucrative opportunity.

Read more: https://applovin.com/developersThis content is made possible by a guest author, or sponsor; it is not written by and does not necessarily reflect the views of App Developer Magazine's editorial staff.