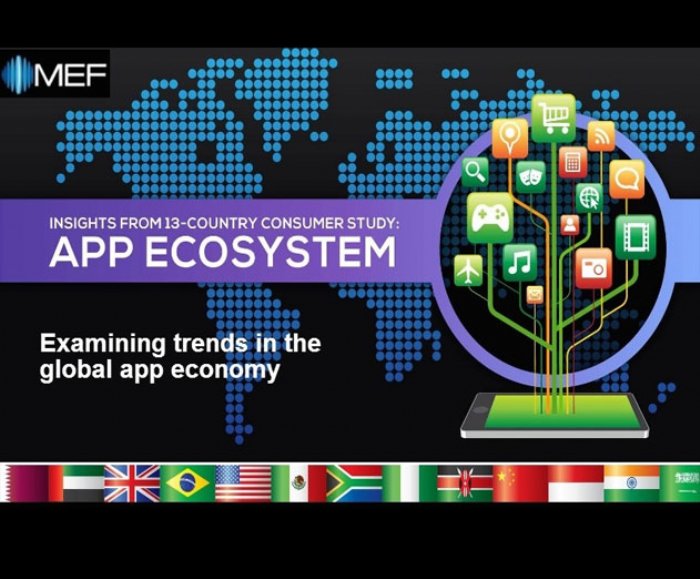 
4,629
MEF has released the final report in its Global Consumer Insights Series. The report analysed data from 10,000 respondents in 13 countries, examining trends in the global app economy.
The report shows 96% of mobile users having used an app on their device in the last six months. This figure remains constant among men and women and among under and over 35 year olds. The report shows that feature phone owners are just as likely to use an app as those with newer, more advanced smartphones indicating the app economy is truly mass-market.
Gaming and social media apps remain the most popular category, with 54% and 46% of mobile media users respectively having used one in the last six months. Music (41%) and photo & video (37%) apps are also well-liked by consumers. Book apps are the least popular, with just 16% having used one.
In growth markets the figures for gaming vary. Mexico consumers are avid gamers at 62% but in Kenya only 36% of users download games, preferring music (45%) and social networking (42%) applications instead. Social networking apps usage also varies – Brazil leads the way at 62%, outperforming users in the UK and US (55%). However, of the developed markets, China does not match this trend with only 35% downloading social apps.
Lifestyle and tools apps vary from market to market with highest engagement in developed mobile markets (US, UK, China). For example, 32% of users in this block of countries have downloaded navigation or travel apps in the last six months where in other regions studied it was just 11-13%. When it comes to weather apps, 44% of mobile consumers in developed countries have used one; elsewhere it is between just 9-17%. India leads the way in Education apps with 26% of users actively engaged in Mobile Education.
When looking at the data by operating system, Windows phone owners are the most enthusiastic users of apps, across every category except books in terms of average number of apps downloaded per user. There is little to separate iPhone and Android phone owners when it comes to app use though iOS users are more likely to enjoy gaming (60%) than any other category (music and social networking are the next most popular categories with 40%).
To view the complete report, click here.