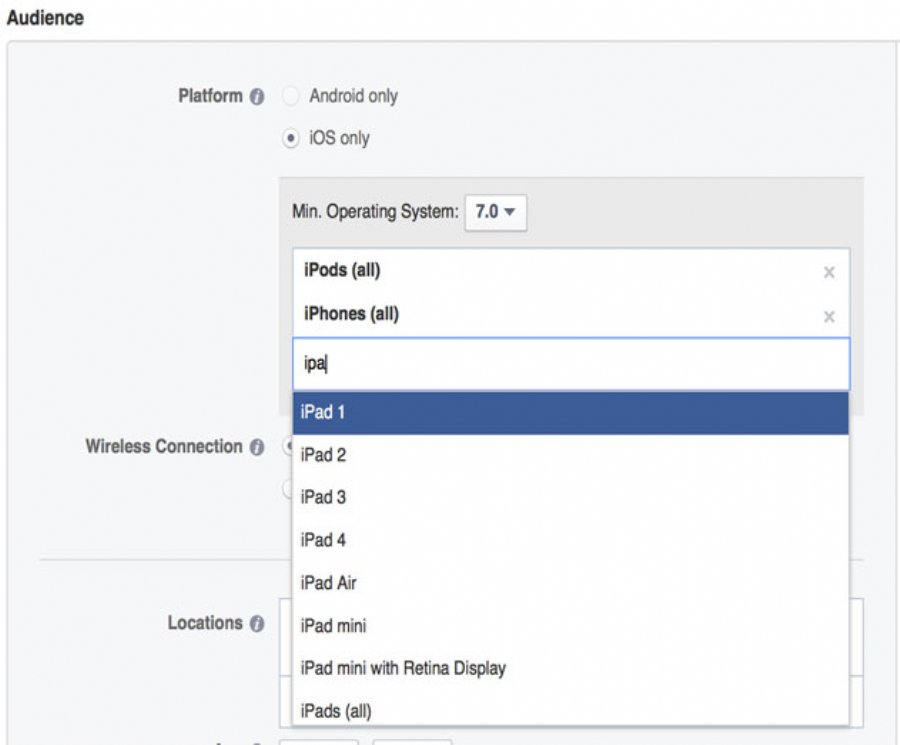 
21,462
Developers who market on Facebook will soon be able to reach people using specific mobile devices, such as a Samsung Galaxy S5, iPhone 5s, or an HTC One. Previously there was only the ability to target iOS or Android, minimum OS version and Wi-Fi only users.
For example, developers can deliver ads to people specifically using a Google Nexus 10 with a minimum OS version of 3.0, who are on Wi-Fi.
Facebook says that the benefits of device targeting for mobile app ads include:
- Greater return on investment: Reach the most relevant users and optimize bids by bidding separately per device.
- App Insights at the device level: Identify which devices are working best for their app with App Insights and target those devices.
- Eliminate wasted spend: Reach devices that are optimal for an app and filter out devices that are no longer compatible. This reduces development time as you only need to build to devices best suited for an app.
In addition to using device level targeting, developers can reach the most relevant people by creating Custom Audiences consisting of mobile app users. For example, for with multiple apps, the ability would be available to cross-promote the portfolio of apps to the people who enjoy the apps. In addition, there is the opportunity to create a separate lookalike audience based on the attributes of existing users to reach a larger set of people.
With Custom Audiences, developers can also reach people who already use an app to increase engagement and conversions. For example, a travel app can reach its existing users with relevant flight deals in an ad with a call to action to “Book Now” for a flight. Another benefit of Custom Audiences is the ability to easily reach the “most active” or “highest value users."
Facebook offers these tips for mobile device targeting for mobile app ads:
- Don't go too narrow with an audience: If there is no clear reason to have a different campaign for people on different devices, then bundle the groups. Facebook recommends having an estimated audience size of at least 500,000 users for each ad.
- Customize the ad to resonate with an audience: For example, use images of an iPad when reaching people on an iPad or mention the mobile device or app store in the text.
- Optimize bids for each campaign: Create different ads with optimized bids for each device or groups of devices as competition may vary by device. By doing so, developers will be able to reach the most people at the most effective price.
- Layer on complimentary targeting features: Use Custom Audiences and lookalikes to reach a large and relevant set of people.