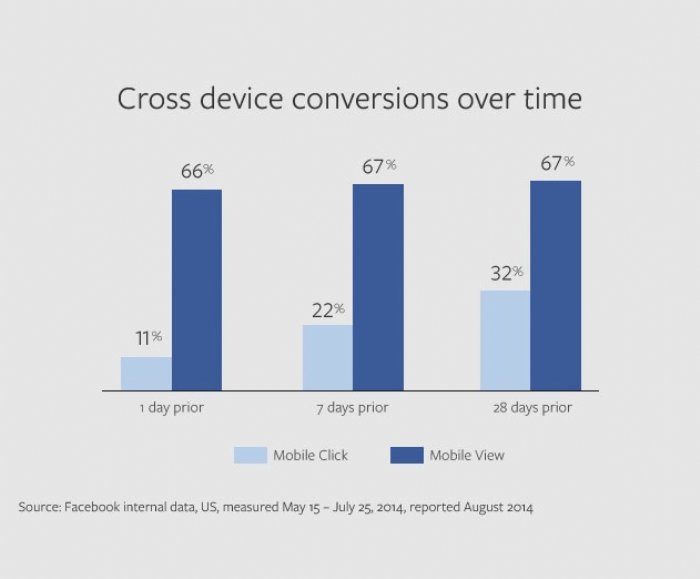 
1,513
Facebook has announced the ability to provide cross-device reporting for Facebook ads, enabling advertisers to see how people are moving between devices, across mobile apps and the web, before they convert. This reporting provides insight into cross-device conversions which are becoming increasingly common as people move between their phones, tablets and desktop computers to interact with businesses.
Facebook already offers targeting, delivery and conversion measurement across devices. With the new cross-device report, advertisers are now able to view the devices on which people see ads and the devices on which conversions subsequently occur. For instance, a marketer can view the number of customers that clicked an ad on an iPhone but then later converted on desktop, or the number of people that saw an ad on desktop but then converted on an Android tablet.
Facebook reports that in early tests, marketers have used Facebook cross device reports to better understand the role of mobile in their campaigns and explain the differences in reports by third-party analytics tools that do not account for cross device conversions.
In a recent analysis of US Facebook campaigns, the company reports that when examining people who showed an interest in a mobile Facebook ad before converting, over 32% converted on desktop within 28 days. The analysis also shows that people who showed an interest in a mobile ad on Facebook before converting were more likely to convert on a different device as more time passed.
To view cross-device conversions for campaigns, simply access Facebook Ad Reports, click Edit Columns, and select Cross-Device on the left-hand menu. The cross device report uses data from the Facebook Conversion Pixel and Facebook SDK.