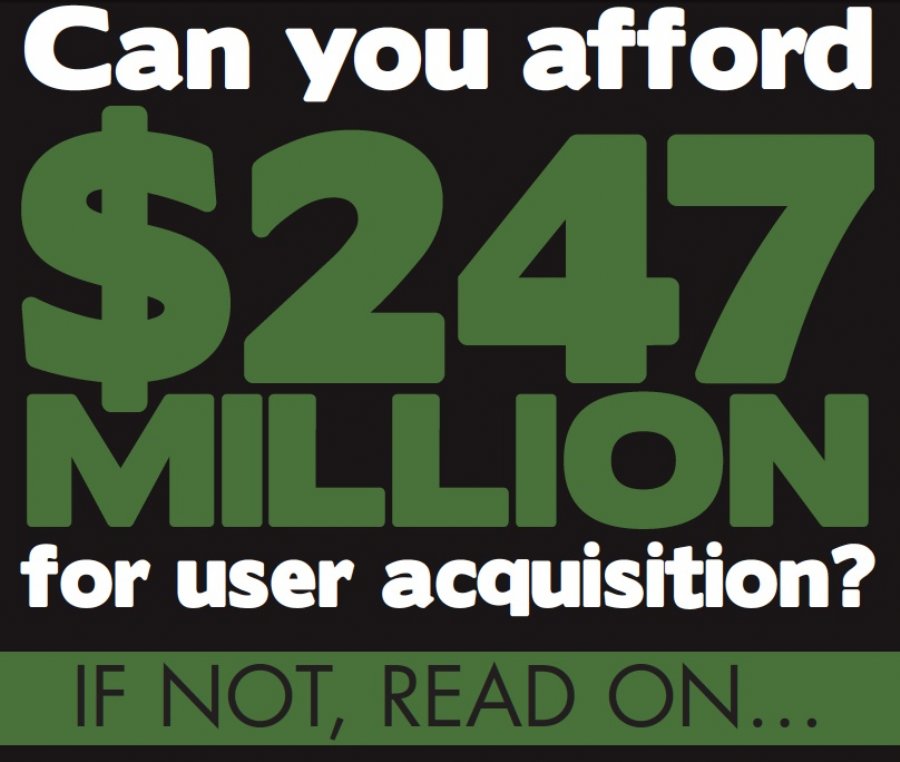 Can You Afford $247 Million For User Mobile Acquisition


2,786
If you have the budget like Zynga, who reportedly spent $247 Million on their marketing and user acquisition efforts last year, great, all the power to you. But if you're like the rest of the 99% of developers out there, don't despair, there's more than one way to skin a cat when it comes to getting your app noticed and getting installs.

But more on that in a minute…

First, I wanted to tell you about a recent article I read on "buying" (not earning) a top 10 ranking on the U.S. App Store, it got me really frustrated when I started to add the numbers up on what it would take to not just get there, but to stay there!

The gist of the the article and my calculations based off of some other Distimo analytic findings can be boiled down as follows:

The one "discount" you can count on however, once you get onto the charts that high, is that you'll start to see about 100% uplift and savings for user acquisition. So for every 1 install you pay for, you'll get another one for free - cool right?

Well to stay the course with 100% uplift, this means you'll need to purchase roughly 12,500 installs daily, which will run you around $15,000 per day to maintain your standings if you're doing ONLY mobile advertising.

But again, there is hope of making your app business successful...

While apps are kind of like snowflakes, in that each one is unique, there are some proven foundational marketing strategies that work for all kinds of apps–from utility apps to games–that have stood the test of time.

Let's explore some of these more tactical, yet easily implementable and budget conscious, app marketing strategies that you can integrate into the promotion of your own app through in-app marketing and engagement.

No matter how amazing your app is, with no customer loyalty, it won't put many frog pelts in your pocket. So while creating and maintaining an app that can hold a person's attention and keep them interested long past the day they downloaded is important, there's a balancing act between the development and the marketing and customer engagement side of things.

1. A quick way to begin engaging your customer and building upon their trust in you is to simply send them a quick automated "thank you" for downloading and trying out the app. These two little words let's your user know that you care and appreciate the fact that they downloaded the app. Simple, but powerful.

Sending notifications of upcoming features can be another way to keep your users engaged and anticipating something new from your app, such as new levels, functions or features.

2. One of the most powerful in-app engagement strategies is to introduce un-lockable content. This gives the user the urge to continue playing or utilizing the app until they unlock and can access everything. This is a tactic that you encounter every single day, and may not even realize it. It's what I refer to as "the loop." And once a loop is open, we as human beings are hard-wired to want to know how it ends. Whether it's your local news anchor giving us a snippet of their night's juiciest story, that won't air until the end of the segment, or the QVC picture-in-picture showing us what's up next, or your favorite sitcom's "to be continued" cliff-hanger, we HAVE to know how it ends. And the same principle applies to apps. If your users have liked what they have experienced so far, they will desperately want to find out what's inside the locked areas.

3. Setting up milestone achievements is yet another way to keep your users engaged. This is one of the principles of gaming theory, and plays off of the competitive nature of humans. And while this is easy to understand when it comes to any game app, such as clearing a level, earning points or rewards, it can also be applied to anything. Think about adding a referral system of some sort in which, upon referring a friend or posting to your Facebook page, you gain additional access, functions or features. Think of the Dropbox model – when you refer someone else, you get more free space. It sure beats the alternative of paying for it.

4. Another way to engage your community is to invite them to spread the word. You can integrate a "Tell-A-Friend" viral feature right into your app, which will encourage them to share it with their family and friends who they think might also enjoy it. But keep in mind, whenever you're asking someone to do something for you, the path of least resistance is to do 90% of the work for them. Make it as easy as possible by creating the pre-populated message in which all they have to do is click "send." Then, their friends get an email, Facebook or twitter message from them and a link to check out your app, and presto, a new (free!) lead.

5. One last in-app marketing engagement strategy to continue nurturing your user's loyalty is to survey for feedback and ask them to rate your app (this helps with social proof too). Find out what your users love about your app so you can craft your marketing message around these points, and find out what they hate so you can create an update that betters the user experience, thus increasing future retention rates.

A great feedback tool for this that integrates right into your app is offered by Apptentive When you take this feedback and incorporate it into your new version, you'll be rewarded since new versions move back to the top of what's new in your category. And since your app is new and improved, coupled with maintaining visibility, this can increase or at least maintain a steady flow of new users. If you're always working hard to make your app better, you'll consistently be rewarded with increased exposure, just because you're listening to your community and giving them what they want.

1. Submission to App Review Sites: Apple's saying, "there's an app for that" is a bit of an understatement. The reality is, regardless of the category, there's probably thousands and thousands of apps for that. But the hard part for your potential customer is finding the one they want that's well suited for their needs…for instance, your new app. And that's the value of app review sites for developers. To get reviewed and featured on these sites means a lot more eyeballs on your app, and a lot more downloads. The key is to submit to as many of these review sites as possible, or hire a company to submit your app on your behalf.

2. Make headline with Press Releases: If you're looking to turn your app into big news, writing an attention-grabbing press release is key. And with so many developers seeking the media's attention these days, it's important to make sure your press release really pops and stands out from the crowd in order for it to get noticed by industry websites, reviewers and bloggers. But don't get scared, if you don't have a bachelor’s degree in copywriting or a master’s degree in marketing, there are cost-effective companies that can help you craft and submit your press release for a very reasonable price.

3. Localization of Your App for International Exposure: Remember, the world is not flat. It's round, and covered with people all over it who speak all kinds of different languages, but who all share two commonalities–smartphone ownership and their insatiable appetite for consuming apps.

Considering the fact that a large majority of smartphone users aren't native English speaking people, you can quickly see a larger market share of users if you take the extra time to make your app useful and enjoyable to the international communities–or even just a few key markets like China, Russia, Central and South America, Japan and Germany. This could result in doubling, tripling or even quadrupling your app's exposure… overnight! And there are companies that will translate your app for you for next to nothing.

As with any successful business, one thing to keep in mind is the power of leverage, and the app business is no different.

So if you're versed in all areas of marketing and know with 100% certainty that you can do everything yourself better and faster than anyone else, please proceed onward.

But if it makes sense to utilize the skill, expertise and know-how of qualified and proven industry professionals to help you achieve more success with your app downloads, then this is something I highly suggest thinking about.

So if you're looking for the next level of success for you and your app, try out some of the free engagement strategies in this article, and maybe even retain the services of an app marketing company for the portions of your marketing that you want to outsource. Because at the end of the day, your app won't get noticed or found on accident.