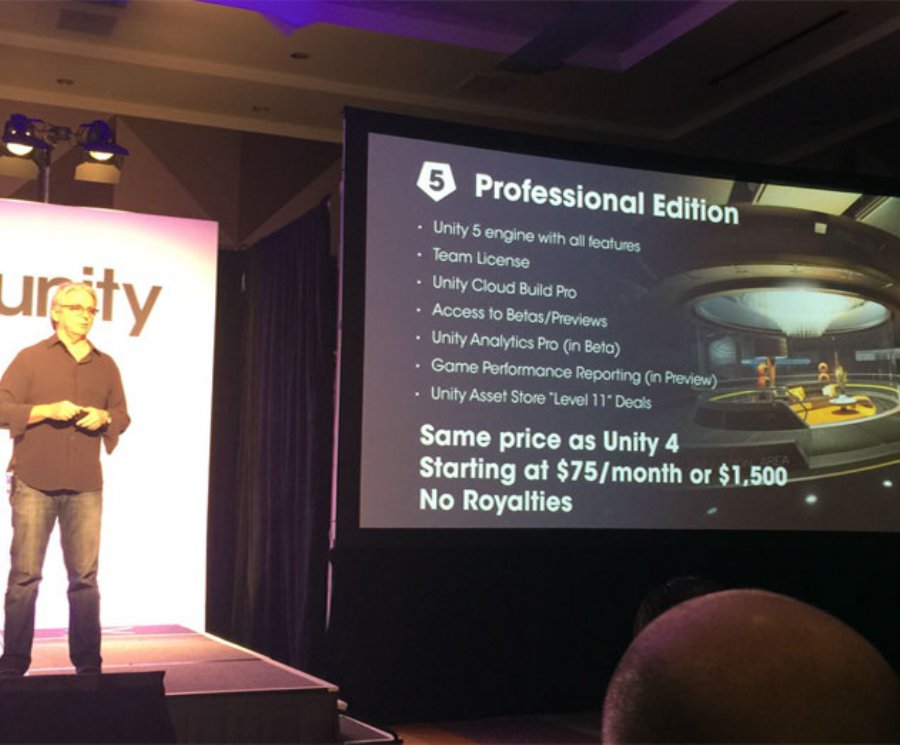 
5,130
During a full house presentation at GDC, Unity CEO John Riccitiello announced the official launch and general availability of the Unity 5 game platform and Unity Cloud Build.
Riccitiello posted a note on the company’s blog outlining the announcement just prior to the announcement. The company also streamed the launch event which included presentations from Unity’s Joachim Ante, Ralph Hauwert, Todd Hooper, and Will Goldstone.
The launch of Unity 5 provides a new, extensible and feature rich 64-bit editor which also includes a growing suite of integrated audio design tools including a full multi-track audio mixer. Riccitiello also told the audience that Unity’s multiplatform support continues to grow with WebGL, has better console platform support and includes the introduction of IL2CPP.  Upon the Unity 5 launch, the number of platforms Unity currently supports totals 21.
The launch of Unity 5 also included the announcement of the new Unity Cloud Build which is providing an option to developers to boost their productivity and efficiency through the cloud.
On the heals of the announcement earlier in the week that the Corona and Unreal 4 gaming engines are now free, one of the obvious questions many game developers were thinking was would their be a change in the Unity business model. The answer is Unity will continue forward with two pricing models.
Unity 5 Professional Edition
Unity 5 Professional Edition has the same starting price point as Unity 4 Pro which is a $75/month subscription or $1,500 for a perpetual license. The pro edition includes Unity 5 plus:
- Team License
- Unity Cloud Build Pro (12-month subscription)
- Unity Analytics Pro (currently in beta)
- Game Performance Reporting (currently in preview)
- Asset Store Level 11 (a new collection of free assets available each month)
- Access to previews and betas
- No revenue limit, no revenue share
Unity 5 Personal Edition
The second option is Unity 5 Personal Edition which offers the same Unity 5 engine and editor as in the Pro Edition.  It includes all the features such as Profiler, Occlusion Culling, Render-to-Texture, and Post-Processing Special Effects as well as all the Unity 5 features like physically-based shading, enlighten, reflection probes and more.
Unity 5 Personal Edition is free with no royalty. Unity 5 Personal Edition is for professional developers, Indies, hobbyists and studios with revenue under $100,000 and funding under $100,000. You can see a full comparison of the licenses here.