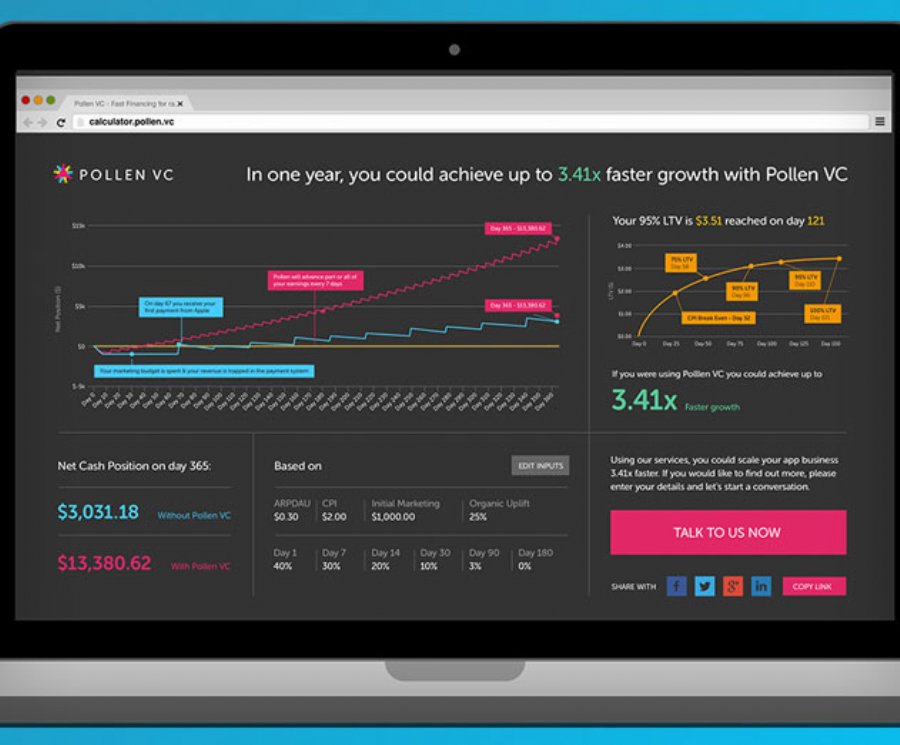 
33,184
New tool from Pollen VC, forecasts how much a mobile app can make over it's lifetime.
While app developers and marketers understand that Lifetime Value (LTV) - the total revenue generated by a user from the time they download the app until they abandon it - is the most important commercial metric , they often struggle because there is also no uniform way to calculate it. Recognizing that a firm grasp of financial metrics, particularly LTV,  is key for any app business to succeed, Pollen VC has launched what they call a "Financial Forecaster", a free tool available to app developers and marketers globally.
The tool offers developers a visualization of LTV and also cash flow scenarios based on readily available metrics that app developers and marketers can access easily through their analytics or attribution partner, or directly from the app stores. By inputting their app’s CPI (cost per install), Retention and ARPDAU (average revenue per daily active user), the app developer sees a visualization of their LTV curve, and a set of customized financial projections which allow them to understand the potential revenues of their app based on a rigorous approach to only investing in paid UA channels when they are ROI positive.
The purpose of creating the Financial Forecaster was to allow developers to easily visualize whether they are currently, or could be, making money from their app - a goal that demands an alignment between user acquisition goals and actual spend to achieve profitability.

“ If the numbers don’t add up, then the Financial Forecaster will communicate this, letting developers know that they should stop spending money on channels that are not delivering a positive ROI,” notes Martin Macmillan, CEO of Pollen VC.