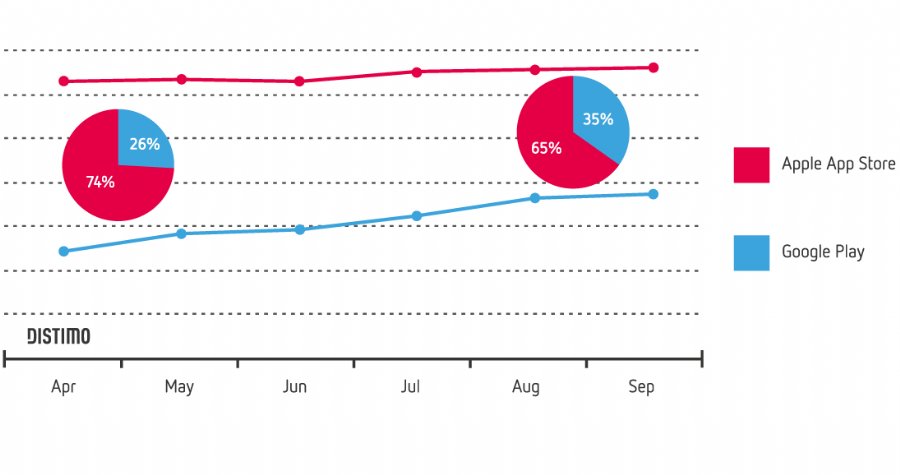 
2,135
Distimo’s latest report, Top Global Apps – September 2013, highlights the top free, paid, and grossing apps for the Apple App Store, Google Play, and the Amazon Appstore. The analysis is based on data covering the full month of September 2013 on a globally aggregated level and is obtained from Distimo’s proprietary AppIQ data program.

Developers were the ultimate winners of the new release of iOS 7 and new iPhone models, as purchasers of new gear had an incentive to seek out new apps.

In the free app rankings, YouTube continued with the momentum it gained in August, reaching the top ranking in terms of global free downloads. Distimo reports there was a significant correlation between the release of the new iPhone and iOS 7 and YouTubes downloads. Rounding out the top 5 in order were Candy Crush Saga, Deer Hunter 2014, Despicable Me: Minion Rush (previously #1) and Facebook.

For paid apps Angry Birds Star Wars II was the leading app in the global paid charts. Minecraft – Pocket Edition was second and Asphalt 8: Airborne was third. The newly released Infinity Blade III had a strong debut at number four and PicPlayPost was fifth based recent updates which drove downloads.

The top grossing apps included major activity in the US and Asian markets which drove Clash of Clans to number one. Rounding out the top five in order were Candy Crush Saga, Supercell, Puzzle & Dragons, and Pet Rescue Saga.

In the free rankings, the only change from the previous month was Skype entering the top five at number five at the expense of Facebook Messenger. The Facebook app retained its number one position with numbers 2-4 in order were: WhatsApp Messenger, Candy Crush Saga, and LINE: Free Calls & Messages.

For paid apps there were no changes in the top five., At the top was SwiftKey Keyboard, Minecraft – Pocket Edition, followed by Titanium Backup PRO Key ★ Root, Nova Launcher Prime, and Poweramp Full Version Unlocker (which barely edged out the number 6 app, Asphalt 8: Airborne).

In the free rankings it was not puzzling that Despicable Me: Minion Rush continued its number one dominance; however puzzle and quiz games were in the mix with Guess what? in second place and Whats The Riddle? in fifth place. Angry Birds Star Wars II Free was third (which is strong considering it was only available for the second half of the month) and Baby Care & Baby Hospital – Kids was ranked fourth.

Apple and Google continue to battle it out for market domination. Google’s continued inroads into Apple’s share slowed a bit compared to previous months and Apple’s revenue was stronger than previously in the year. Of course a new OS and phone introduction would be expected to have an affect on the app markets.