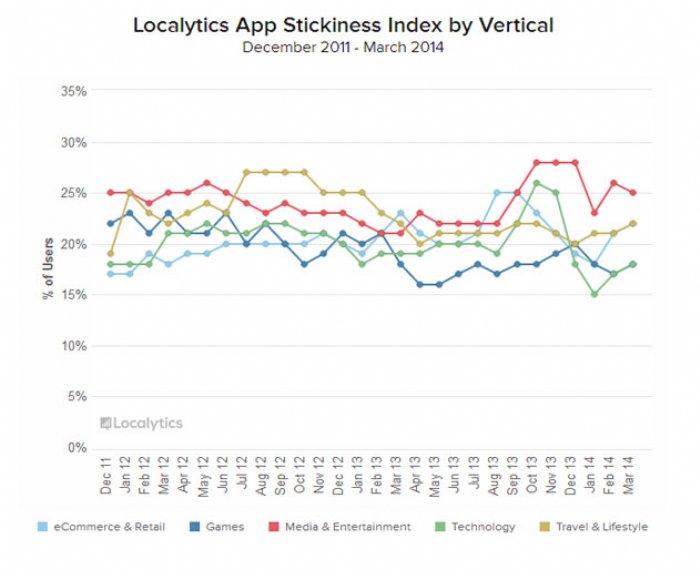 
4,336
Localytics has published its Q1 App Stickiness Index which measures how well apps are tackling the challenges of engagement and avoiding churn, in aggregate. The App Stickiness Index is a composite of two key app metrics: Power Users and Loyal Users.
Power Users are the percentage of an app's users who have 10 plus sessions in a month, i.e. how many highly engaged users an app has.
Loyal Users are the percentage of an app's users who return to the app within 3 months of their first session, which is the industry benchmark to measure loyalty and churn.
App Stickiness provides an average of an app's Power Users and Loyal Users. By taking into account both user engagement and user loyalty "App Stickiness" provides a single metric that is applicable to all apps. Developers can use the Index to benchmark their own App's Stickiness over time and across platforms and verticals.
By understanding the context and triggers that influence app engagement and loyalty in aggregate, developers can then analyze their own user insights in order to adapt and refine app engagement strategies.
The full, comprehensive report is available here.
Highlights of Overall App Stickiness Q1 2014 include:
- Q4 2013 and Q1 2014 were volatile quarters, in opposing directions. In Q4 Power Users were at an all-time high; in January 2014 the percentage of Loyal Users plummeted sharply.
- The top five vertical groups varied widely. For example, apps in the Games vertical consistently lag behind other verticals for Loyal Users (three-month retention) but don't exhibit a marked difference in Power Users.
- There were noticeable similarities and differences between the iOS and Android platforms. For example, Android apps have more Power Users while iOS users are more loyal. And Android has consistently beaten iOS in terms of Power Users, however, iOS has made significant strides during the last several months, and this gap shrunk in Q1 2014.
While these are just some of the highlights, to fully get the full picture check out the entire report which is available directly on the page link below.