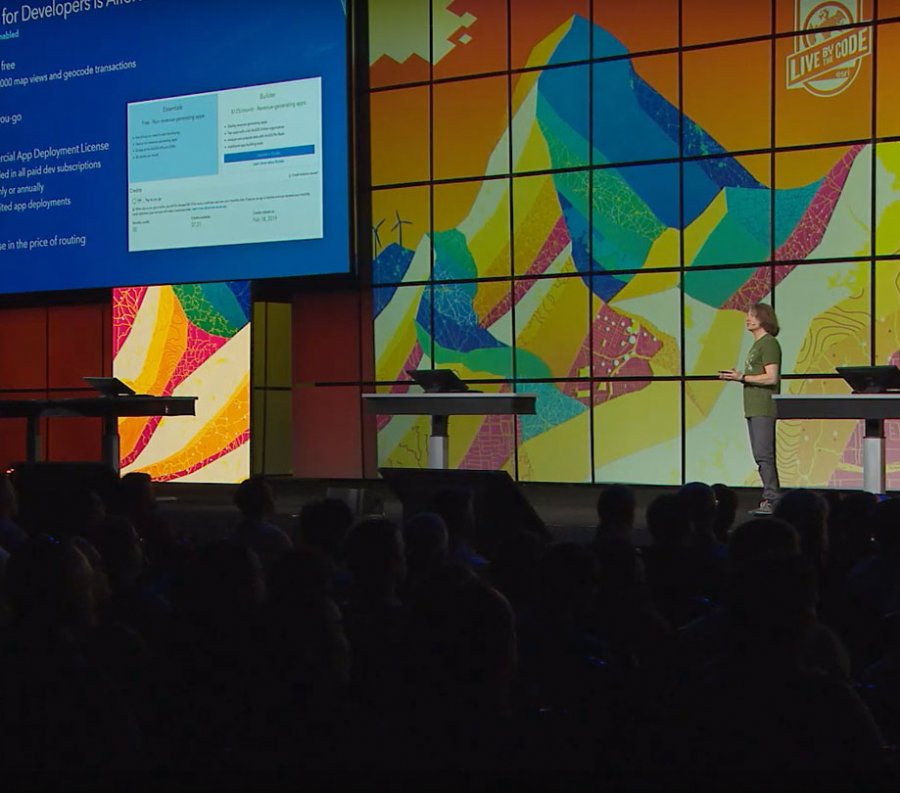 At the 2019 Esri Developer Summit in Palm Springs, CA, presentations and workshops focused on new capabilities for speed, science, and flexibility. Esri president Jack Dangermond opened the conference by recognizing the more than 2,100 developers in attendance for their tireless efforts to build location intelligence apps that make a difference in our world. Whether they're building lightweight apps, designing heavy-duty enterprise tools, implementing machine learning, or developing analytic programs, there was something for every geospatial developer at the conference.

Here are some highlights:

ArcGIS for Developers offers a full suite of developer tools and development resources to build mapping and analytics solutions to support business needs, enabling developers to use ArcGIS APIs to create location-based web and native applications for desktop and mobile devices. New enhancements and changes now give developers greater freedom to build, manage, and deploy apps as quickly as possible by allowing them to use the specific tools they need when they need them, priced to fit their individual needs. A commercial app deployment license is included in all paid developer subscription plans (Builder plan and higher) and the price of routing services has been reduced from $4.00 to $0.50 per 1,000 routes.

Recognizing that data-driven decision-making is becoming the status quo in organizations, Esri has launched ArcGIS Notebooks, intended to engage the data science community. Based on Jupyter notebooks, ArcGIS Notebooks will allow developers to write, run, and see code right in the notebook. This is a web-based, interactive, computational environment for users. Geospatial analysts and data scientists are able to bring their models and open data libraries into ArcGIS Notebooks, which comes bundled with a full suite of coding and data science tools and integrates tightly with open data source libraries and the Living Atlas. ArcGIS Notebooks will be available later this month.

The JavaScript API can now directly support new formats such as photos with location data enabled in them through EXIF headers. Users can now upload several gigabytes of imagery that ArcGIS will process and geolocate on the map. The API also directly supports GeoJSON now, enabling developers to directly work with GeoJSON without having to download or convert it first.

Dramatic improvements in 3D give developers new ways of visualizing their data. In conjunction with better integration with BIM data, the new 3D slice tool makes it easy to interrogate and explore building interiors in 3D. New animated symbol options also give the appearance of lifelike movements for water, trees, and other features. The new Sketch API also supports crowdsourced 3D workflows such as allowing residents to design their optimal use of public lands and recreational areas.

Editing has been significantly improved with the JavaScript API. In addition to more fine-grained control over editing access and capabilities, ArcGIS now supports conditional survey forms and the ability to deploy focused editing apps using a single line of code. New widgets make collecting data easier and faster, whether in a connected or disconnected environment.

Optimizations to the back-end communication protocols the API uses have dramatically sped up drawing times while reducing bandwidth load. Improvements such as dynamic feature tiles make it possible to quickly render large datasets faster than ever before, all while keeping back-end data updated. New charting and analysis tools give developers the ability to publish interactive data exploration apps without having to pre-cook the analysis. These tools also take advantage of performance improvements to enable rapid, on-the-fly filtering, analysis, and visualization of data.

Artificial Intelligence and Machine Learning (AI/ML) was a strong focus at this year’s Dev Summit, with capabilities for deep learning being integrated into ArcGIS Pro via tools like “Export Training Data for Deep Learning” and “Detect Objects using Deep Learning”. These allow the integration of deep learning models built with libraries like Tensorflow, Keras, Pytorch etc. to be run directly within ArcGIS Pro. Outside of Pro, hosted notebooks allow the creation and dissemination of AI/ML code, tutorials, and demos through Portal and ArcGIS Online. The future for AI/ML at Esri is centered around making it easy to create, share, and consume AI/ML models as part of larger workflows.

Dot Density is a new smart mapping style that randomly fills polygons with points in order to represent data values. This is particularly useful when you want to see the relative concentrations of different phenomena in an area, such as looking at ethnicity in a city. The style includes the ability to change the value representation of the dots on-the-fly (for example, change from 1 dot for every 25 people to 1 dot for every 200 people) and instantly visualize the results. You can even animate dot-densities to create GIF-like visualizations from a single layer.

Esri has published hundreds of vector basemaps and now has one of the largest collections of basemaps available anywhere, such as the new OpenStreetMap vector basemap. The basemap, which updates minutes after changes to the core OSM data are made, does not carry view costs under the new ArcGIS for Developers plan. Esri continues to localize vector basemaps into different languages and world views. Users can also take advantage of the Vector Tile Style Editor to create their own custom basemaps. Simply start with an existing basemap and choose colors/features/fonts that best suit your purposes. You can then save these custom basemaps to your organization so other members of your team can use them.

A webhook is a new ArcGIS Enterprise capability that will automatically provide other applications with event-driven information, delivered as an HTTPS request. They can be used to create automated and integrative workflows, adding new extensibility to ArcGIS Enterprise. Starting with ArcGIS Enterprise 10.7, administrators can now subscribe to events related to their Portal items, users and groups.

Esri maintains 40+ open source JavaScript apps and 10+ open source native apps on GitHub. These open source apps give developers building blocks of functionality for tasks such as editing, analysis, and more they can easily customize for their needs. New features include the ability to build alerts on real-time conditions into apps so you don’t have to constantly monitor data streams for a specific event. Esri will be adding an SDK for embedded Linux to provide a better in-vehicle experience that could even eventually be applied to robots and other mobile machines. Lastly, Esri is adding even more support for Python and open source data science modules throughout the platform.