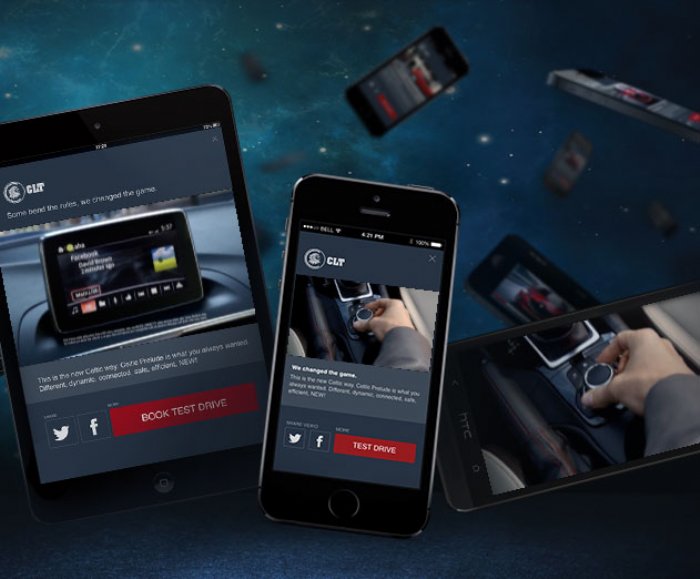 
2,835
Celtra, a provider of mobile display ad creation, serving and analytics, has launched a family of new Smart Video Ad Formats for all mobile devices. These formats use a new developed video technology created by Celtra and leverage newly developed responsive ad design capabilities.
Companies participating in the launch include Skype, Opera Mediaworks, and AdTheorent, who are partnering with Celtra to further develop and improve the technology and user experience of Smart Video Ad Formats.
Celtra’s Smart Video Ad Formats bring together in-banner device agnostic video technology, responsive ad design and built-in social sharing capabilities, including Facebook, Twitter and WhatsApp, packaged into ad templates to help reduce production time.
Celtra’s Smart Video Ad Formats utlize video analytics which feature a metrics dashboard and real-time insight into the consumption of video content across the entire campaign.
Specific abilities include:
Play video inline everywhere. – Often when running of inline display video ads across mobile devices and with various media owners the video-play defaults to the device’s native player. When this happens, advertisers lose both the creative opportunity for a proper interactive layout, and the ability to track and report on the video. With Celtra’s online automatic video transcoder and smart decision engine, users can use a single source video file and seamlessly play it inline, across different devices, web, and in-app SDKs. For every video Celtra automatically produces multiple video streams to match different devices and media type requirements. This allows the ability to deliver the best consistent inline video play experience across all variables.
Autoplay the video and create a video teaser - Typically, to achieve an auto-playing video teaser for mobile, advertisers needed to animate a heavy stack of sequenced sprites. This often resulted in quite large in initial file size. The Celtra platform provides the ability to use a real video to create the teaser. With intelligent progressive loading, the platform delivers a lighter file size, which results in a smoother playback experience.
This is accomplished through a special video stream that handles this experience. Celtra automatically chops and loops 5 seconds of the video and configure it for pre-expand units. For designers, the ‘teaser option’ is just another checkbox for the video component; the platform takes care of the rest.
Make Video Responsive - With this release Celtra has also introduced a responsive design solution designed specifically with responsive behavior in mind. The layout, including the video facade, is given a relative percentage size and positioning breakpoints. This allows them to smoothly scale and adapt to different screen sizes and between device orientations. Furthermore, the video plays uninterrupted between device orientations while the layout is reflowed and scaled.
Enter full screen with continuous video playback - With these new features advertisers no longer rely on the device’s native player for a full screen experience. The video plays continuously while users switch between the inline and fullscreen stages. Celtra achieved this experience through the implementation of their proprietary web based video player. This, in combination with the syncing of the playhead across the multiple video streams supports such a smooth full screen transition.
Overlay and animate interactive elements on top of an inline video - Prior to this solution overlaying interactive elements with mobile video could be tricky; especially on handsets and especially agnostically across SDK and devices. With this new solution, the inline video is just another layer in the AdCreator builder. Advertisers can easily compose interactive overlays--including animated shapes, images, text, or other components - on top of a video asset to create an impactful and engaging experience.
Sync video play and ad content to bring richer ad experiences - To trigger actions in the ad content in response to video based events Celtra has wrapped up several actions and APIs to support video events such as video complete or video pause. This makes video events easily accessible for designers and builders.
Get consistent and reliable video tracking - Even tougher Android devices are now being tracked so video data pool is now comprehensive. Video data is consolidated and consistent across different media owners. It’s also easy to access and digest in real time. Furthermore the platform provides the ability to analyze video consumption down to the second, and go beyond the quartiles.