Next
Christian Hargrave
2/8/2017 8:50:32 AM
2/8/2017 8:50:32 AM
Women are the most serious about mobile dating apps
Dating Apps for Women,Mobile Dating,Mobile Marketing
https://appdevelopermagazine.com/images/news_images/Liftoff-Datings-Apps-Findings-App-Developer-Magazine_da2ha3ry.jpg 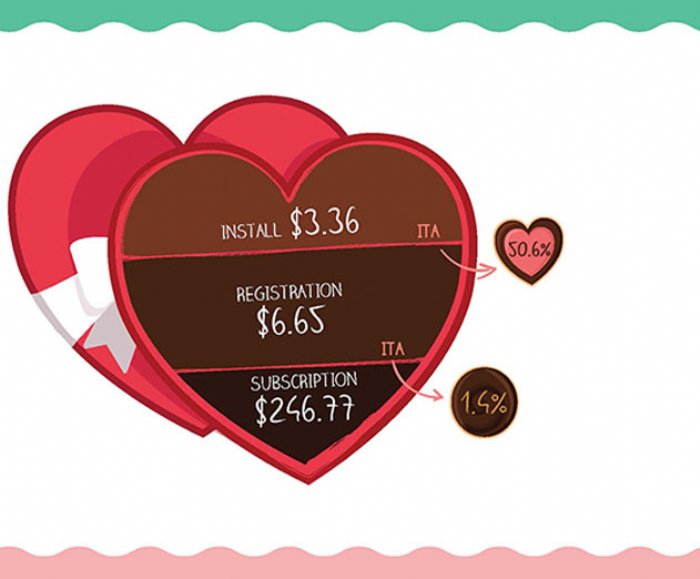 Women are the most serious about mobile dating apps


9,302
Liftoff has released an infographic (below) illuminating trends in mobile dating behavior. The data shows that North Americans are the most “swipe-happy” when it comes to mobile dating apps, with women in general being the most profitable users.
The infographic also showcases trends around engagement and examines geographical differences between North America, Europe, Middle East and Africa (EMEA) and Asia-Pacific (APAC).
The data comes from more than 20 of the top dating apps. Based on an analysis of nearly 3 billion dating app Northad impressions across more than 1 million app installs and 3.4 million post-install events over the entire year of 2016.

The report reveals that North Americans are the ones dominating dating - at least on mobile. In fact,  America’s dating app subscription rate is 7.2 times higher than EMEA and 2.6 times higher than APAC. What’s more, acquiring a user in EMEA who goes on to subscribe is 190 percent more expensive than in North America.
Given this insight, it’s clear that if dating app marketers want to score subscribers, their money is best spent in North America.
“As we expand into new regions, it’s fascinating to dive into our data and see how mobile engagement differs around the world and across cultures,” said Mark Ellis, Liftoff’s CEO. “For example, our Mobile Dating report last year focused just on North America and we learned that registration rates peak in the spring - but when you widen the lens to include all APAC and EMEA, we see those registration rates spiking in the summer. The more specific slices that we can uncover, the better we can help marketers make more informed, regionalized, and hyper-local decisions.”

More Specifically, North American Women are the Most Valuable Daters on Mobile.

After analyzing the data, it’s clear that women are more serious mobile daters, while their male counterparts are far less committed - meaning marketers should aim cupid’s arrow at North American women. Surprisingly, women register for dating apps 100 percent more on Android and 106 percent more on iPhone than male mobile users. Not only are women registering at higher rates, but their subscription rates stack up similarly at 31 percent higher on Android and 49 percent higher on iPhone.
While women are more costly to acquire than men, the data proves they engage and subscribe at a much higher rate, making them the most valuable consumer segment for mobile marketers.

Compared to Other App Categories, Dating Apps see the Largest Drop-Off in Install to Action.

Compared to other popular app categories (gaming, finance, shopping, travel, utility), dating apps see the largest drop-off in engagement from install to action (subscription). By comparison, travel apps see the highest install to action (purchase) rate of 11.5 percent, while dating apps ring in at 1.4 percent - the lowest across all categories.
While the data suggests a high drop-off in app engagement, the total number of app users and frequency of usage must also be considered. Compared to other popular app categories, dating apps have a significantly large user base with 91 million users worldwide, many of which open the app over five times per day. So while install to action rates are low, dating apps actually see high engagement rates with other factors considered.
In fact, if users do subscribe they tend to do so fairly quickly - within one week of downloading the app.

Both Men and Women are Looking for Summer Lovin’

Many marketing dollars are allocated towards the weeks leading up to Valentine’s Day, as most would assume mobile users are searching for last-minute dates. However, Liftoff’s data shows these dollars may be wasted, as January and February are not the prime months for acquiring new mobile users.
In actuality, the data reveals that dating app usages heats up along with the seasons. Registration rates peak in June, with 57.3 percent of users registering post-install, and remains steady through July, August and September. What’s more, summer also sees the highest dating app subscription rates at 3.1 percent in July and 3 percent in August.
Whether you’re a mobile marketer trying to acquire users and increase subscription rates, or a mobile user looking for love, the summer season is the time to land a special someone.