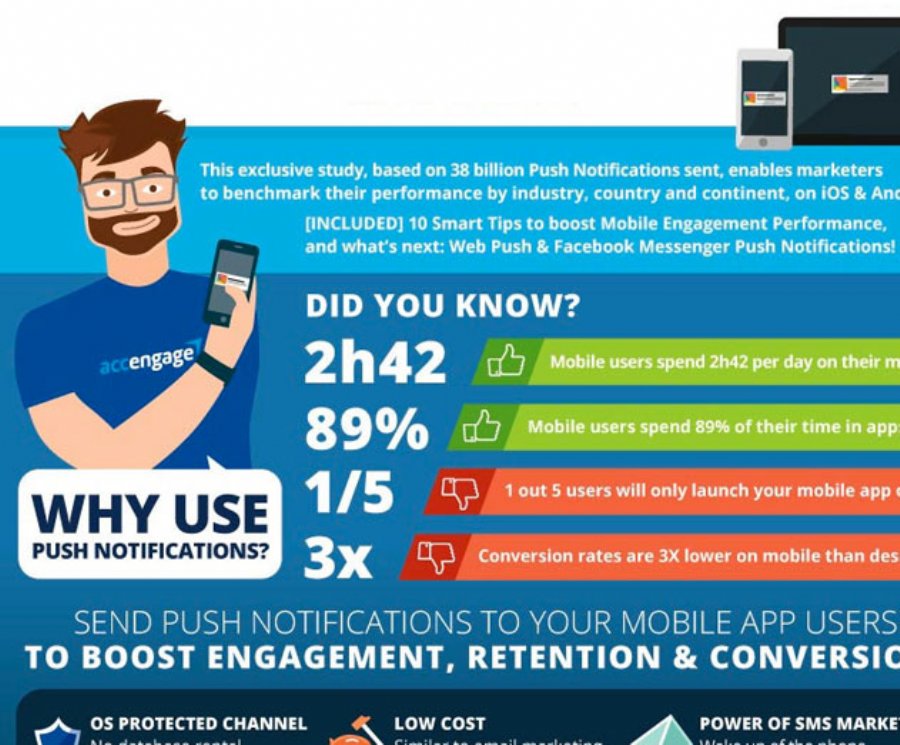 Why You Should Be Using Push Notifications


9,913
Provided in the infographic provided here, the insights from the study provide mobile marketing benchmarks of the performance of push notification campaigns in terms of opt-in rates (% of users who accept to receive Push Notifications) and reaction rates (% of users who click on the notifications), in order to evaluate how to provide industry comparison. Added in this edition are the continent and country dimensions to the analysis providing behavior differences towards push notifications according to geographic areas.
Accengage analyzed the performance metrics of 38 billion push notifications sent by its customers through its SaaS technology in 2015. There were thousands of campaigns categorized in 10 industries targeting more than 750 million consumers in 70 countries.
The research showed that when comparing the 100% of Android users who are automatically opted-in for push notifications when they download an app (passive consent), 41% of iOS users manually accept to receive them when prompted (active consent).
In the Telecom industry opt-in rates are the highest (56%), followed by Finance and Travel (at 51% respectively). The Fast-Moving Consumer Goods industry (FMCG) is last with a moderate 29% opt-in rate. From the previous year there was a significant opt-in rate increase for the Finance industry which gained a 9 percentage point increase and as well as a sizable decrease of the opt-in rate for the Media and Classified industry which lost 15 points to reach 41%.
In terms of clicks on Push Notifications, there was an average reaction rate of 8.7% (across all OS, industries and countries), which represents an increase compared to the previous study. There is a significant increase in terms of reaction rates for Push Notifications which were at a 6% average in 2014, and reached 8.7% in 2015. The Top 3 countries with the highest reaction rates are Netherlands (19% on Android / 6% on iOS), France (17% on Android / 5% on iOS) and Germany (17% on Android / 6% on iOS).
As in 2014, Android greatly outperformed iOS (13.1% average reaction rate on Android versus 4.3% on iOS) thanks to the ability to create richer formats (image, multiline text, AlertBox, etc). The Top 3 industries with the best reaction rates are: FMCG (25% on Android / 7.5% on iOS), Travel (21% on Android / 6.3% on iOS) and the Telecom industry (18% on Android / 8.3% on iOS).