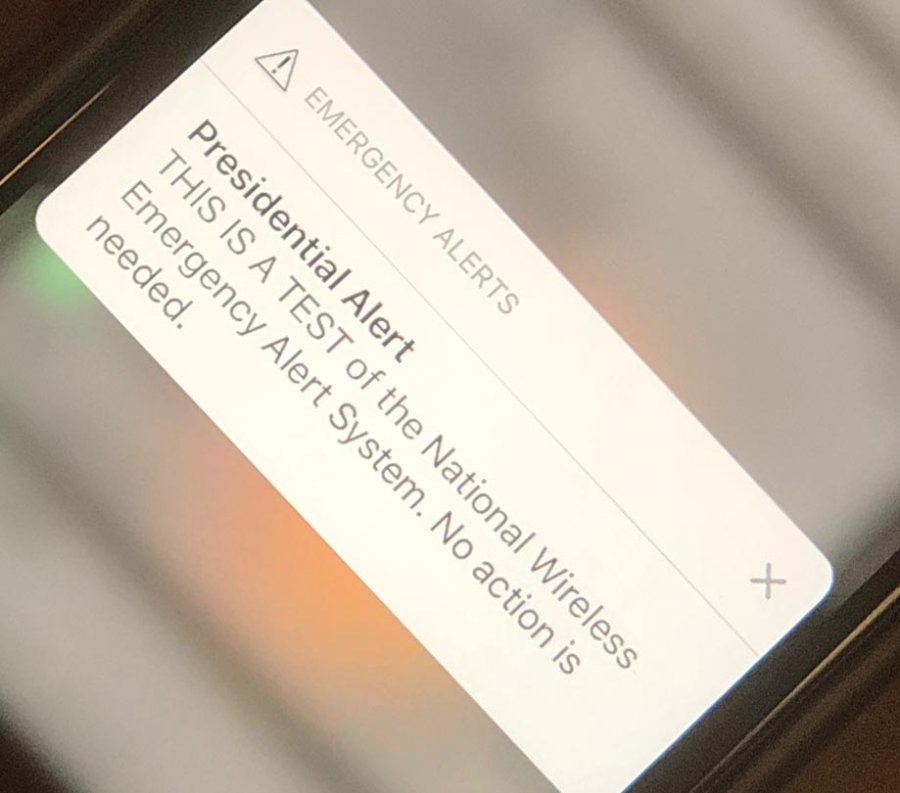 Presidential Alerts and the future of mobile communication

Mobile communication and the Presidential alerting system have just been welded together by the first test message sent by FEMA.

FEMA has sent their first emergency test message to all of the mobile devices throughout the United States. They reported every American who owns a smartphone - which is about 75% of the population, should have received the test alert. In total the message went out to a total of 225 million devices right around 1:18 PM CST reading "Presidential Alert: THIS IS A TEST of the National Wireless Emergency Alert System. No action is needed." In addition to the mobile alert, a nationwide television alert also went out nearly 1 hour after the mobile notification appeared. Only Wireless Emergency Alert-compatible cellphones that were switched on and within range of an active cell tower were able to receive the test alert. 100 mobile carriers participated, including the largest providers.

The new Presidential Alert system is also known as the Integrated Public Alert and Warning System (IPAWS).
It was President George W Bush, who in 2006, signed an Executive Order 13407 ordering the Secretary of Homeland Security to establish a new program to integrate and modernize the nation's existing population warning systems.

How was the message sent?

The message was delivered through the US wireless emergency system, which is under the purview of the Federal Communications Commission (FCC). The emergency signaling system was first created back in 2012, but this is the first message to be sent out prompted by President Donald Trump.

The future of Mobile Emergency Communication

So what is the role of mobile technology as the center of communication between the US federal government and her citizens? We have all been jolted to grab our phone when we get an Amber Alert or Severe Storm Warning, you know the ones that periodically make you almost pee your pants? I don't mind those kinds of alerts myself, though there is little action I can take other than keeping my eyes peeled for someone matching a description.

But what if the scope of the emergency messaging service gets expanded in a way that feels a bit more intrusive, like if an alert contained a payload that caused your device to do something else entirely? Play a video, report your location automatically, disable functionally until a selection is made, etc. Scary to think about but a reality we may face as threats loom across our country, and not from just natural disasters.

Although the Whitehouse and FEMA have decided to test the messaging service, it is important to note that current laws restrict the President from issuing an alert with any message on behalf of the President - at least, for now.

Remember when people in Hawaii received the message "BALLISTIC MISSILE THREAT INBOUND TO HAWAII. SEEK IMMEDIATE SHELTER. THIS IS NOT A DRILL" earlier in 2018 on their devices? It was clearly a mistake and was revoked 38 minutes after it was issued. But mistake or not, it sent people to the moon in fear.

If an alerting system like this falls into the wrong hands, all kinds of chaos and confusion will take place. What's worse, it will only take one "cry wolf" message sent out to destroy the integrity of the entire system.

FEMA has said that the system is not actually activated by the President, but rather by someone at FEMA with significant involvement of other agencies and advisors. That concerns me a bit because of the controversy FEMA receives during any crisis, and the fact FEMA still isn't sure why some people received the test message before others, and why some didn't receive the message at all.

Still, many people are not happy about this new wave of communication at all. In a new lawsuit filed in New York, people are seeking to stop the implementation of FEMA's new "Presidential Alert" messaging system.

Plaintiffs in Manhattan are suing Mr. Trump and FEMA Administrator Brock Long, claiming the alert system is a "violation of Americans' First and Fourth Amendment rights to be free from Government-compelled listening, as well as warrantless, non-consensual trespass into and seizure of their cellular devices."

Regardless of how you feel about the alerts, I think at face value they are a good thing. The media has a bad habit of destroying the actual narrative of an event,or making it seem way worse than it actually is just to snatch the top story -  but we all still tune in when something might affect our way of life anyway, eh?

These news Presidential alert messages are meant to be seen as authoritative, and containing critical lifesaving information -  in a way that shouts "crap is about to get real," or at least that's how I will view them. That is, until I receive one that reads "Sup?".