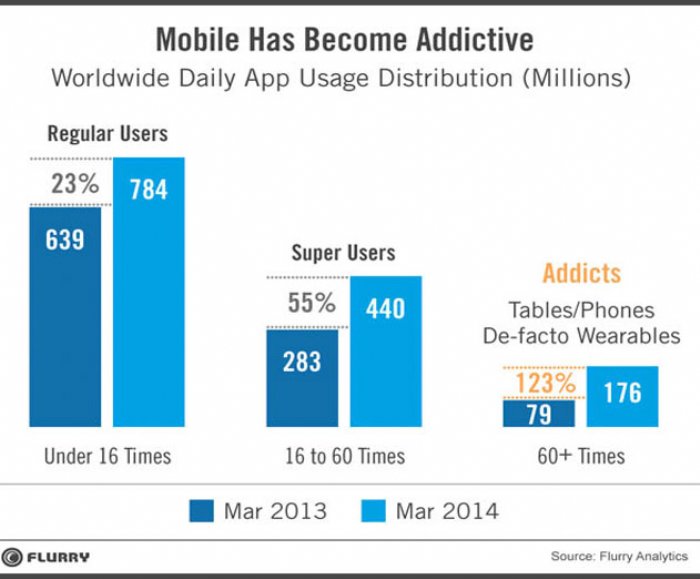 
13,537
We know they're out there. We know them personally and we see them shoot apps up the top of the charts. And they are the subject of a new report from Flurry Analytics in an attempt to analyze the behavior of consumers that heavily use their smartphones or tablets, a segment Flurry refers to as the “Mobile Addict.”
Using data from Flurry Analytics, the company has defined a “Mobile Addict” as a consumer that launches apps more than 60 times per day. Looking at data Flurry sees from 500,000 apps across 1.3B devices as of March 2014, they see that on average, a consumer launches apps 10 times per day. So they have defined a “Mobile Addict” as someone who launches apps 6 times more per day than the average.
The company suggests that in March of 2014, there were 176 million Mobile Addicts, up from 79 million in March of 2013. This compares to 55% growth for a category they are calling Super Users and 23% for Regular Users, who launch apps 16 times or less per day.
According to the research Mobile Addicts were 52% female and 48% male, compared to 48% female and 52% male for an average mobile user. That means females over-index 8% compared to the average mobile user. Flurry points out that the 8% number appears small, but it is significant. In the total Mobile Addict population of 176 million, it means that there are 15 million more female Mobile Addicts than male Mobile Addicts.
And who did they find were most addicted? Predictably, teens/college students and the not so predictable middle-age parents. The Mobile Addict segment over indexed on the 13-17 (Teens), 18-24 (College Students) and 35-54 (Middle Aged) age segments. In fact, Middle Aged consumers constituted 28% of Mobile Addicts, but only constituted 20% of the average mobile consumer. The Addict segment under indexed on 25-34 (adults) and 55+ (seniors).
The Flurry team suggests that one possible explanation for the inclusion of the middle-aged consumers segment is that they are probably part of a family and their devices are likely shared among multiple family members, including their children. Males and females in the Middle Age segment both over-indexed on parenting and education. Males over indexed as Catalogue Shoppers and females over indexed on Sports. The picture Flurry formed is a family of four, with two phones, one tablet, and all three devices shared by the family for education, entertainment and more utilitarian functions as well.
As mentioned earlier, Mobile Addicts launch apps over 60 times per day, making them consumers that are effectively wearing their devices. Flurry suggests that their analysis of the Mobile Addict should provide a sneak preview into the make-up of early-adopters of Wearables, and what types of apps and experiences will resonate with them. To date, many applications for Wearables have focused on fitness and health, but developers should think about the other experiences that will interest people who need to be connected all the time. And this, of course, includes the aforementioned teens, college students and middle-aged parents.