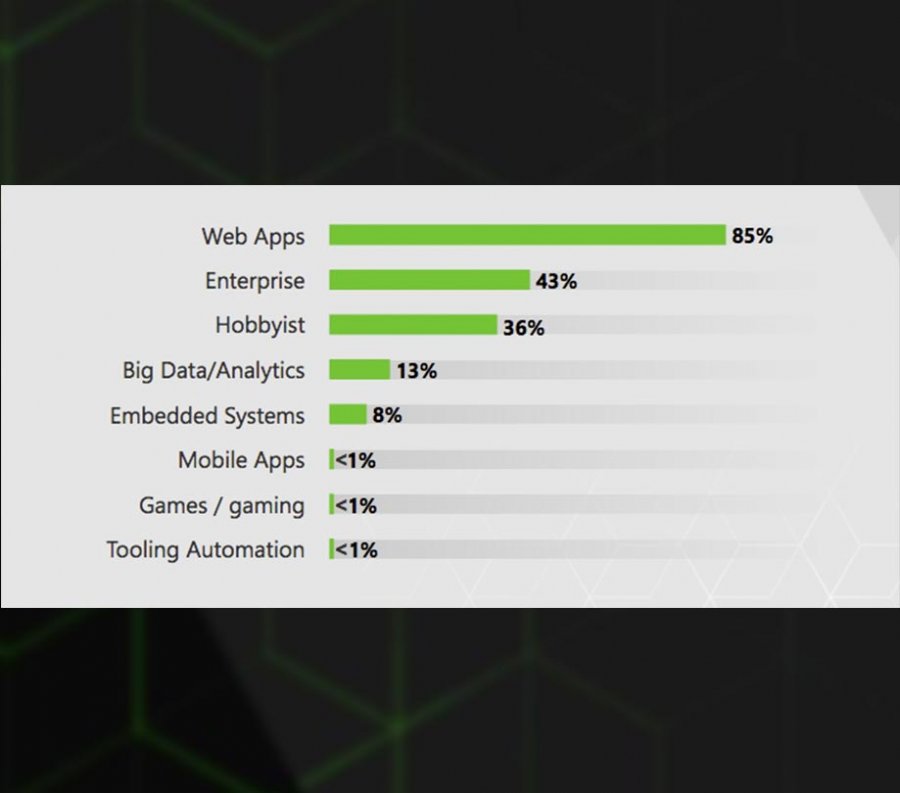 Third annual Node.js user survey has dropped by by the Node.js Foundation providing insights into how developers are using their popular JavaScript Environment.

The Node.js Foundation announced the availability of its Node.js User Survey Report. Key findings of the survey reveal the benefits of Node.js expand over time, resulting most often in improved developer productivity and satisfaction and reduced development costs. Containers and cloud-native computing are on the rise with 58% of overall users noting they using Kubernetes and Docker, which is up from 45% in our 2016 survey.

Furthermore, nearly three in four users plan to increase their use of Node.js in the next 12 months with growth likely coming from outside the United States, particularly in Latin America or EMEA.

More than 1,600 people spanning more than 100+ countries and speaking at least 60 different languages participated in the survey, which was distributed in English and Chinese. Analysis of survey results conducted by a third-party consultant, Research Collaborative.

Node.js is a JavaScript runtime environment used by startups and enterprises alike to build enterprise, mobile, web and IoT applications, robotics, and API engines across an array of industries and companies, like Netflix, Airbnb, NASA, PayPal, Walmart, Capital One and more.

“The Node.js 2018 User Survey shows consistent Node.js growth and interest in Node.js across regions, particularly in Latin America and EMEA,” said Mark Hinkle, Executive Director of the Node.js Foundation. “ One of the most revealing findings in our new Node.js data is increased use of Docker, Kubernetes, and GraphQL. For the first time, we also asked who is deploying to serverless frameworks from AWS, Google, and Microsoft. A hallmark of Node.js is how versatile and ubiquitous the platform, so each year we see new developers and operators around the world leverage the technology in new ways.”

Since last year, Node.js use with Docker jumped from 43 to 48%, while Kubernetes use increased from 9 to 12%. AWS Lambda has the advantage with 20% of Node.js developers leveraging this serverless framework, while 9% use Google Cloud Functions and 4% use Azure Functions. GraphQL, which is a good fit for new API-driven models such as serverless, is growing with 21% of Node.js developers using the technology.

Beyond containers and cloud-native technologies, there’s a broad range of additional technologies and tools used with Node.js. The most common technologies used alongside Node.js include: databases (96%), frontend frameworks/libraries (87%), and Node.js frameworks (82%), with use of Angular 2 and Vue also increasing.

Survey respondents spend on average 60% of their development time in Node.js and consider themselves full-stack developers. As last year, many users say that Node.js has had a positive impact on their business - chiefly through increased developer productivity and satisfaction. Node.js allows companies to use JavaScript talent across the entire stack to boost efficiencies and tackle new projects, making increased developer productivity the No. 1 business benefit. Additionally, the survey found productivity, satisfaction, reduced development cost, and increased application performance also increased over time.

For example, in 2012 Condé Nast tapped Node.js to unify its media brands under a single common platform and replace different systems, tech stacks and programming languages that strained the company’s IT teams. Condé Nast chose Node.js not only because it could solve its technical needs, but because it would help with recruiting developer and engineering talent.

“We chose Node.js pragmatically because it’s fast enough and powerful enough for what we need. Secondarily but arguably just as important, it is our hiring PR magnet,” said Paul Fryzel, principal engineer at Condé Nast.

Developers primarily deploy to AWS, while the use of AWS in development is also growing. On-Premise infrastructure is also widely used but has dropped for use in production since 2016 from 39% to 33%.

Heroku, Digital Ocean and Google Cloud Platform made noticeable gains. In the past year, for production use, Heroku jumped to 25% from about 10%; Digital Ocean jumped to 21% up from less than 10%, and Google Cloud Platform jumped to 16% up from less than 10%. Where users deploy varies greatly by region. For example, in China, many do not require deployment, for those who do, Alibaba dominates.

Node.js in a Polyglot World

Microservice-based architectures allow companies to build out new products and services quickly and efficiently without having to displace existing systems. Node.js’ lightweight and event-driven architecture is a perfect fit for microservices architectures.

Node.js developers are using a range of other languages besides Node.js - more than three on average, including primarily JavaScript, Python, Java, and PHP.

In the past 12 months, Node.js was most commonly used with the following languages:

However, PHP, Ruby, .Net and Java are among the many languages that Node.js developers say they will use less of in the next year, with use of Rust, JavaScript, Go and Swift on the rise.

Internet applications continue to be the primary focus for Node.js developers with 92% of full stack programmers writing web apps. Forty-three% of all back-end, full stack and front-end Node.js developers combined are building enterprise applications. This is the second most common type of development work. Those outside the traditional development areas are more likely to be working on embedded systems. Furthermore, three in four Node.js users are focused primarily on back-end or full stack development.