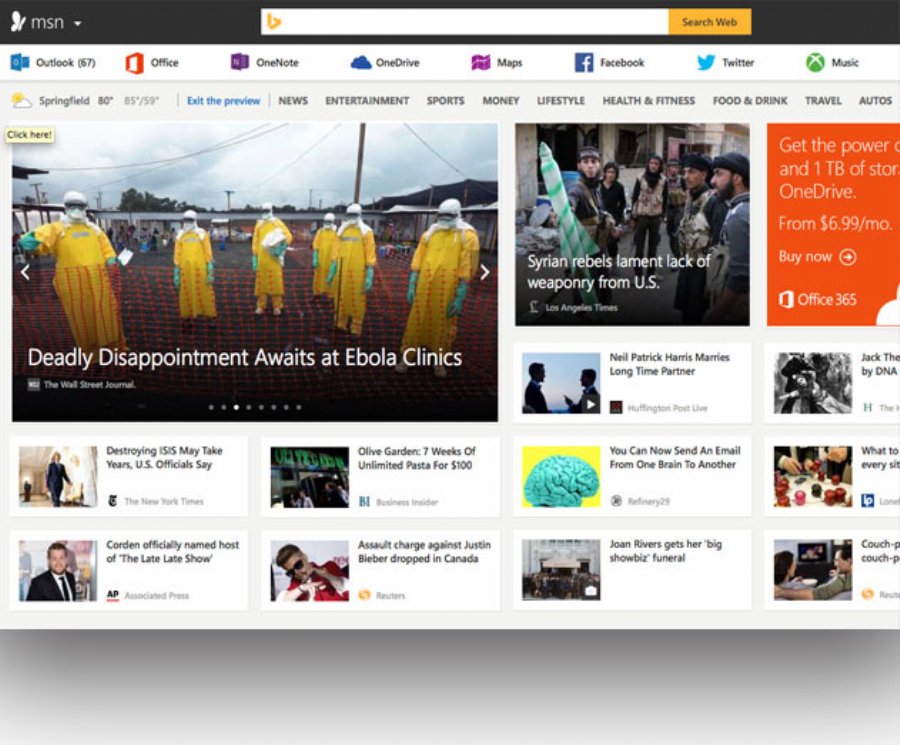 
15,332
Microsoft has announced the launch of the new beta edition of MSN. The new MSN combines premium content from media outlets with personal productivity tools that help users better access the information.
The new ‘Me Stripe’ at the top of the page that integrates both Microsoft and third-party platforms that people use both in and out of work. The new experience is available for the web and will soon be available across all major operating systems including Windows, iOS and Android.
From a marketing standpoint, the new MSN brings the opportunity to reach 425 million people across 55 markets through MSN apps that will be pre-loaded on Windows 8 and Windows Phone 8 devices.
MSN is partnering with over 1,000 sources, including the Guardian, The Independent, Sky News and the Telegraph in the UK, the New York Times in the U.S., The Yomiuri Shimbun and The Asahi Shimbun in Japan NDTV and Hindustan Times in India, Le Figaro and Le Monde in France, and Lance and Estadão in Brazil, and many more. It features 10 sections including sport, news, health & fitness, money, travel and video.
The new MSN brings actionable information through the app integration, from personal productivity tools like shopping lists, flight status and savings calculators, to integrated access to popular sites like Outlook.com, Facebook, Twitter, OneNote, OneDrive and soon Skype.
In the coming months, Microsoft will release a suite of MSN apps (previously Bing Apps on Windows 8 and Windows Phone) across Windows Phone, iOS and Android. The new MSN offers these benefits for advertisers:
- Improved reach to an engaged and loyal audience of nearly 425 million unique visitors worldwide each month
- Increased engagement with users via immersive ad offerings, including mobile apps on Windows Phone, iOS and Android
- Marketers can purchase ad unites through similar IAB standard units available on previous versions of MSN