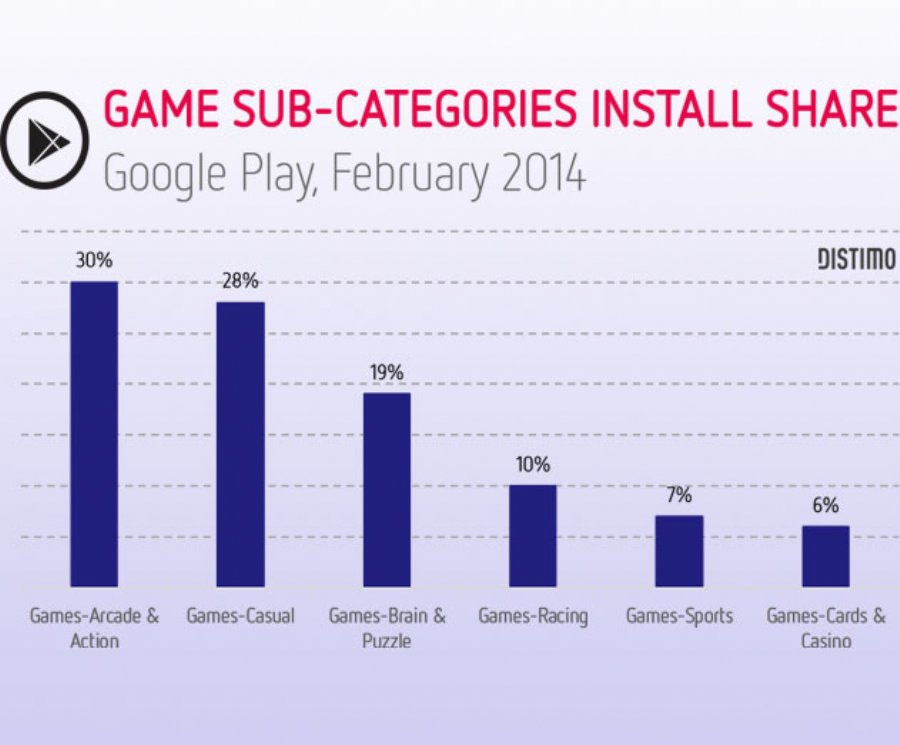 New Game Genres In Google Play Store Helped Some, and Hurt Others


2,545
What kind of apps gained an advantage from the recent changes in the Google Play Game Genres? And how can developers benefit from this analysis in their app strategy?
Insight can be found in a new Distimo report, “Google Play’s New Game Genres,” which analyses the recent Google Play expansion of the game genres to cover a broader variety of games. With the update, some previously existing genres such as Arcade & Action, Brain & Puzzle, and Cards & Casino were removed, as new and additional more confined genres were introduced, such as Card only.
As the reports explains, after the update a lot of games moved to the new games genres. As a result, the user installs were more widely spread covering three times as many genres as before. In April 2014, these moves brought the Casual genre to the top, with 18 percent of all global device installs.
With the broader mix of game genres, developers should have a better opportunity to get noticed. The Distimo overview after the update shows that the install volume is more spread out across the new genres. Half of the now 18 game genres showed a device install share of less than 4 percent.
Also, almost the entire top 10 of the grossing charts in the new Family genre in April 2014 came from the Casual genre. The developers of these games saw an opportunity in the genre update to find a new and more matching home for their apps. This paid out with a higher visibility at the top of the charts due to increases in the rankings.
In addition to the overall analysis, Distimo tracked where games listed in the discontinued genres were relocated to show which genres most developers moved their games, and to analyze the resulting impact of these changes in terms of rankings, device installs, and revenue.
The full report is available here.