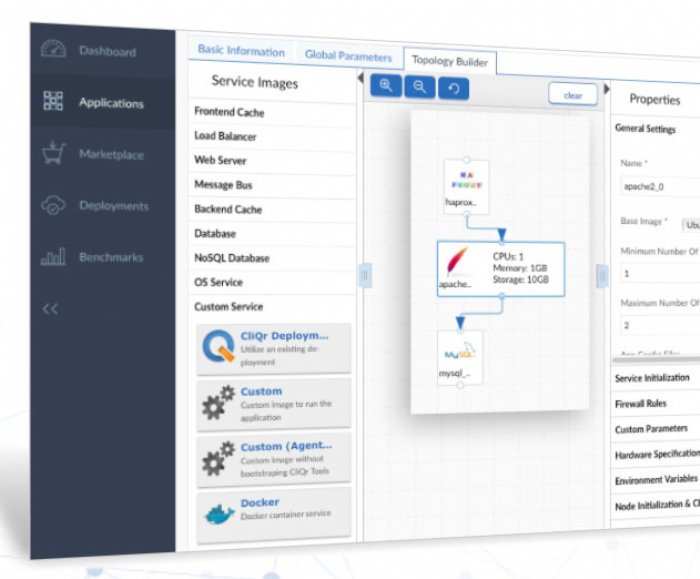 
17,160
With the launch of CloudCenter 4.2, CliQr has integrated into its cloud management platform a Continuous Integration (CI)/ Continuous Deployment (CD) Project Board that integrates and automates the management of users, applications, and environments.
Through integration with CloudCenter the CI/CD Project Board offers a visual view of project phases, health, and overall status. The Project Board is an integrated cloud management platform feature, not a separate tool, allowing it to be directly linked to underlying infrastructure and application automation. With CloudCenter’s cloud agnostic application profile with cloud specific orchestrator, the integration of the Project Board allows it to work well across datacenter and cloud environments.
The new CI/CD Project Board also adds a new user interface and new project related capabilities to the existing application-defined cloud management capabilities of CloudCenter.
New user-related features and capabilities for developers include:
- Project health and status: New UI tab offers simple view of process phases, and color coded status and health of individual deployments in the context of overall process flow.
- One-click promote: Users can click to promote a deployment to the next stage. Promote action deploys latest version of artifacts and into fully configured environment on top of underlying infrastructure at next/any stage of the process.
- Integrated automation: Developers update code in IDE and then see the deployment status in the CloudCenter Project Board. They can them take action without detailed knowledge of underlying infrastructure and application automation, and without having to learn and use multiple new UIs related to various tools.
- Cross-cloud process: Users can click to promote to next stage that can be in a completely different environment such as AWS, Azure, OpenStack, vSphere, UCS Director without needing detailed knowledge of datacenter or cloud environment or APIs, without logging into or using separate UIs.
- Budget status: Users can quickly see budget or resource allocation and current usage by stage or overall project. Controls can be set to prevent actions that exceed budget.
Users don’t need direct access to cloud account credentials, or even need to know specifics about where it is deployed. With CloudCenter DevOps and CI/CD teams can start simple and manage an end-to-end project with a platform that can start simple then scale and grow.
For those who set up and launch projects, or manage multiple projects, or integrate DevOps toolchain automation, new features and capabilities include:
- Project manager role: A new role is defined, that includes rights to launch project, model process phases, link deployment environments to phases, link budget plans to projects and phases, link users to roles and permissions, as well as activate and manage project overall.
- Project definition and launch: New UI appear as major tab where project managers launch and manage projects, and then can view and manage multiple projects including tracking spending against targets, all without knowledge of underlying automation or cloud environments.
Project level cost controls: Plans and bundles now apply to project or project phase, not just users and groups. Project managers can set limits and report on usage against those limits.
Improved toolchain Integration: The latest release of CloudCenter 4.2 includes a variety of improvements that enable the CI/CD Project Board feature in the context of an existing tool chain. Updated Jenkins plugin, as well as updated support Chef and Puppet as components in an Application Profile, along with new support or artifact repositories S3, Artifactory, Chef and Puppet all allow CloudCenter to be anchor of automated CI/CD solution.
Several benefits can be associated with having one solution that combines project board and deployment automation as features of a cloud management platform, including:
- Holistic view: Single project, automation, and cloud management fabric that federates management of applications, users and clouds. One platform used for project setup, project execution, as well as integrated application and infrastructure automation which gives both developers and project managers instant view of the overall project status.
- Abstraction: The CI/CD Project Board as feature in cloud management platform allows users to “one click” tasks that have sophisticated underlying automation. Users don’t need to have knowledge of automation or underlying infrastructure, and don’t need to UI hop across multiple tools to complete tasks.
- Improved efficiency: Using the project board as part of management platform saves time during project setup and especially project execution. Using one solution for deployment automation in both pre-production and production environments reduces variability that is a common source of wasted effort for development and production personnel.
- Simplicity: Program managers don’t need deep knowledge of clouds or automation tools to set up an automated end-to-end project. Nor do they need to learn and master multiple, tools. Developers stay focused on development and don’t have to learn or use multiple tool logins beyond IDE or build automation, to track and mange account logins or need to install or configure environments. DevOps engineers can simplify develop and maintain integration between various tools with the platform as foundation or central actor in toolchain simplifying role based access, centralized cost and usage controls and reporting.