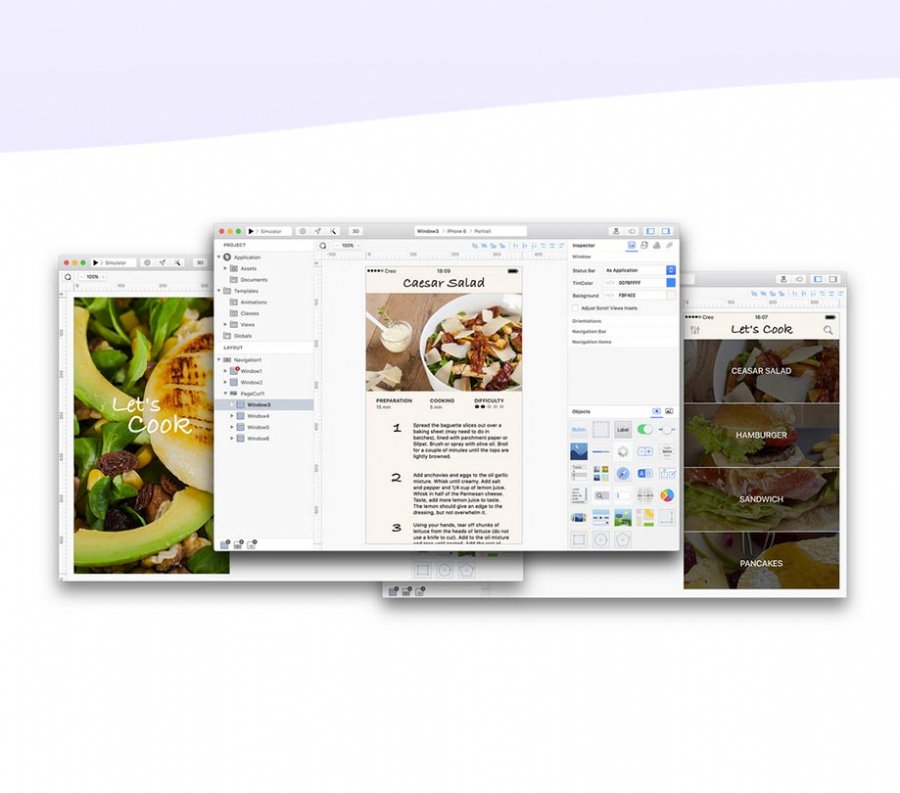 Creo offers drag-and-drop controls, classes, and objects that can be configured using a graphical interface. Complex app navigation hierarchies and windows can be easily created with a few mouse clicks. While building the app's interface, the user is also effectively building a native app. Creo uses Creolabs CreoKIT Objective-C/Swift native framework that enables Creo to execute any iOS code, directly on MacOS.

While Creo offers an easy way to preview mobile application code on the Mac, it also offers a native iOS app that can run the Creo code developed on the Mac, so developers can get a true feel for how their code will look on the target device. Testing Creo apps directly on a mobile device are as simple as making sure both the mobile device and the Mac are on the same network, running the Creo player app on the mobile device, and pressing the "Send" key on the Mac app. The app transfers to the device and runs as any native mobile app normally would.

"Designing and developing mobile apps with traditional tools has always been an involved and time-consuming process," says Marco Bambini, founder of Creolabs. "With Creo, we have created a better development tool that streamlines the app development process. By allowing users to combine the design and code process into one workflow, we are enhancing their app development methodology."

Creo developed the CreoKit framework to allow the execution of iOS and Android code on a MacOS without making any major changes. The framework allows developers to design and develop their apps, and then immediately test them directly on their Mac. The CreoKit framework is also available for licensing as a standalone product for developers, offering a way for them to easily port their mobile apps to the MacOS.

"We didn't want to reinvent the wheel, but we knew we needed a way for the Creo development tool to execute mobile code on the MacOS," adds Marco. "We knew we needed to come up with a way to merge design with code to give developers the ability to preview the app directly on their Mac, that's when CreoKit was born."