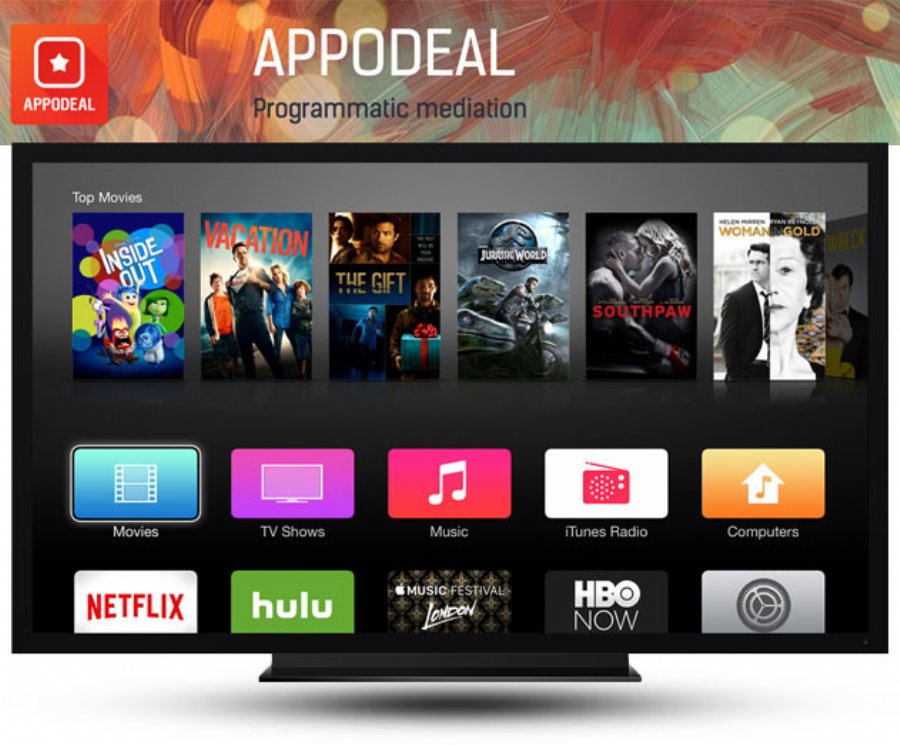 
4,387
Appodeal has announced that its programmatic ad mediation platform now supports ads in Apple TV apps. The new Appodeal SDK allows app developers to embed ads in Apple TV apps, optimize ad campaigns and conduct cross-promotional campaigns for iOS and tvOS apps.
According to a recent Appodeal announcement, The tvOS app market is actively growing and the projected ad eCPM in apps on that platform will be much higher than smartphones and tablets apps, because people watching TV tend to be more engaged, are used to ads and perceive high-quality banners and videos better than on mobile.
The company points to the fact that since 2007, Apple has sold 37 million units Apple TVs. An Apple TV app is not just a larger version of an iPhone or iPad app, but a completely different product, adapted to the peculiarities of the TV screen. Advertising in these applications isn’t just physically bigger, as it’s more interactive and vivid. It does not have many of the same problems as mobile advertising, such as limited screen real estate allowing for full-screen interactive ads.
With Appodeal developers can embed ads from platform partners including Applovin and Spotxchange into their tvOS apps in the format of skippable and non-skippable video up to 30 seconds long or rewarded video (in app video ads that give users a reward for watching, such as currency, product or another incentive). In addition, developers can create campaigns with direct advertisers.
The new SDK also opens up to publisher’s additional opportunities for cross-promotion of apps by placing ads of their Apple TV apps in their own applications for iPhone and iPad.