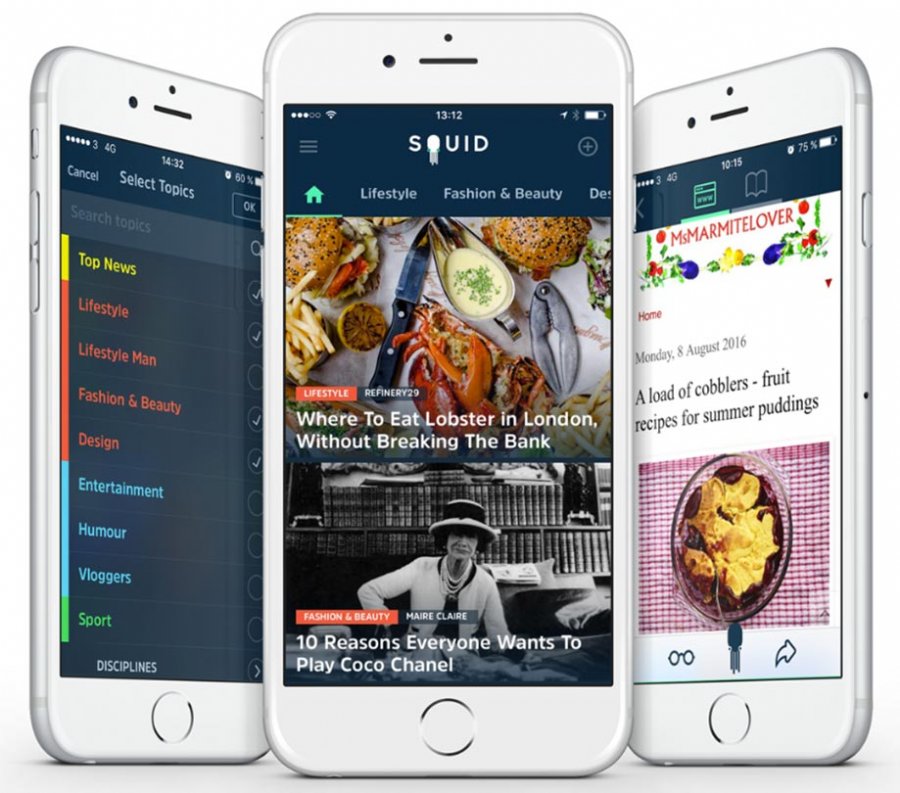 SQUID millennial news app founder and CEO, Johan Othelius, talks about how their development team put together an app that has over 1M downloads.

SQUID App - the first news app built for millennials, was developed by Njuice AB, a media company based in Stockholm, Sweden, has just crossed 1,000,000 downloads and the company is growing its user-base by double-digit numbers every month.
The goal of the app is to make relevant news readily available, offering a wide range of topics that let users select and create their personalized news feeds. SQUID’s unique algorithms gather news automatically from the best sources on the web. The algorithms analyze the origins, sort them, categorize them, prioritize them and give you all articles and videos from websites, blogs and YouTube channels needed in one single app, according to your interests.
The app is launched in the 9 most prominent countries in Europe as well as in Australia and Russia. In every country, the users can read local and global news in their language but also switch quickly between countries to practice reading skills in their second language for example.
We spoke with SQUID app founder and CEO, Johan Othelius, about how the app was developed and what he thinks makes his app uniquely differentiated from the rest.

ADM: Why did you decide to build SQUID App?

Othelius: We wanted to bridge a gap in the market because we had noticed that young people did not read as much anymore, and the traditional news media was not able to attract the millennials. I myself have three daughters that I saw spent many hours every day with their phones but somehow still were not as informed about what is going on in the world as I remember being in their age. The more time many young people spend on social media the less time they have for news media. That was when I decided to start building SQUID. I wanted to create a unique product that would attract millennials by making news reading modern, easy and entertaining.

ADM: What makes SQUID App a unique service compared to other offerings in Google Play Store and App Store?

Othelius: Well firstly since there is no other news app that targets millennials and the young generation like we do. Following this, we are focusing on making the app picture-centric to lure the visual minds of the youth to make reading more fun, creative and easy. Furthermore, we bring relevant news in so many different news topics making SQUID an app that has something to read for all. We gather news from thousands of different websites into one app and give you all different perspectives on the top stories. We make it easy for the readers to personalize their news feeds as well as tweaking articles with for example highlighting tools and stickers before sharing with their friends.

ADM: Tell me about SQUID's users.

Othelius: SQUID App is targeting the millennials in the ten countries where we are currently launched. Our biggest group of users is people aged between 18 and 24 followed by the second biggest group of 25 to 34. The app was first launched in Italy, France, and Poland in 2016 leading to these being our three biggest markets today.

ADM: What type of news do consumers like the best or engage with the most?

Othelius: As with other news apps the consumers generally go there for the big stories and current events in the local country and around the world. However, with SQUID we offer more than just that, and our consumers come to us for the latest news in their smaller topics of interests as well. Of these the most read news topic is technology, but other examples are gaming, film, entertainment, football, fashion, food, esport and health & training. With SQUID you get push notifications about the most important news, but unlike other news apps, you will not only get them about top news and politics but about your other interests as well.

ADM: Tell me about the latest updates to SQUID. What new features have you introduced?

Othelius: We have added several new features on both iOS and Android to make it easier for our users to personalize their news reading even more. Firstly, we have added the possibility to change the order of your topics, letting you have your favorite ones up first and more easily accessible. Secondly, we have made it possible to block certain news sources from your feed if there are sources you really don’t like. If a user changes his or her mind about a source it is, of course, possible to unblock it at any time. We have also added even more content categories and more sources.

ADM: What is your ultimate goal with SQUID, and where do you see the company heading in the next few years?

Othelius: The ultimate goal of the app is to stimulate reading and we want to play an important role in the ecosystem of news where we help news media reach the young audience. We want to back democracy and the freedom of the press and to beat fake news by giving different perspectives on stories coming from approved sources.

In the next few years, we plan to launch in more countries to make our app available for the young generation in all of Europe and across the world. Of course, we are also upgrading our app continuously with new features and more content to offer our users the personalized news reading they can expect.

ADM: Tell me about the team behind SQUID.

Othelius: Development, as well as our head office, is placed in Stockholm, but beyond that our team is spread out across Europe with one Country Manager for every country. Most of the communication within the company is therefore over email and skype but we find it beneficial to have our team working locally for a better contact with the press, other companies as well as our users. In addition to our Country Managers, we also have student ambassadors operating locally - these students help us spread the app toward a relevant audience at their schools and universities. We find it very efficient to be present at for example universities since young professionals are really our biggest market.

Johan is the Founder & CEO of SQUID App. Johan studied at the Stockholm School of Economics and University of Southern California. He worked at McKinsey, Unilever and then started one of the first mobile internet services in the world. Then he worked as Marketing Director for the youth-targeted mobile operator 3, and latest at two newspapers in Sweden, Dagens Nyheter and Expressen. It was from his experience in both the mobile and media industry that he came up with the idea of the news app. SQUID App was launched in 2016 and has today crossed the 1,000,000 download milestone.