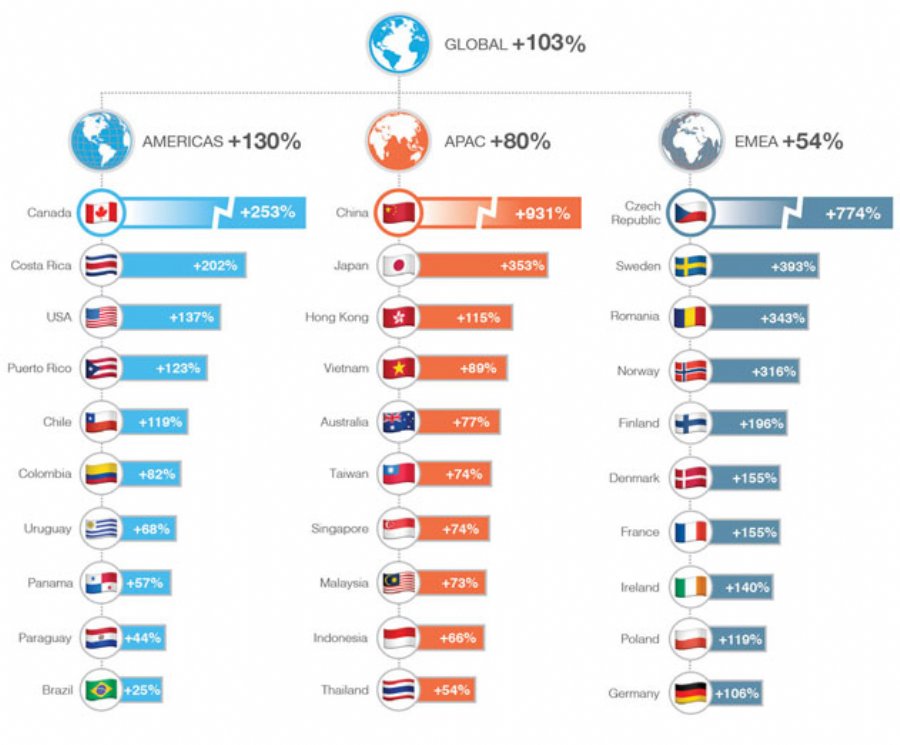 
8,586
Smaato just published its quarterly Global Trends in Mobile Advertising Report. The report offers key insights and trends geared toward mobile advertisers and developers, which helps them make smarter decisions when building out their monetization strategies.
Smaato's platform receives over 300 billion ad impressions each month, which are auctioned through a network of over 450 demand partners. Drawing from this data, the Global Trends in Mobile Advertising Report offers six emerging trends in Q2 2016, which offer both broad and granular insights into what's happening in mobile advertising today.
Broadly speaking, mobile ad spending continued to post impressive gains, growing +103% globally. Despite impressive gains in Asia-Pacific and EMEA, the Americas continue to lead growth in mobile advertising, with stronger year-over-year Q2 2016 growth (+130%) than in Q1 2016. In APAC, China was the notable stand-out, with a +931% growth in Q2 2016 versus Q2 2015.
The report then drills down into new and unexpected findings around eCPM, a key metric for publishers and app developers in today's competitive mobile market. Specifically, Smaato focused on eCPM drivers that are important to publishers today, including app category, operating system/environment, and location.
In terms of app categories, Smaato observed that arts and entertainment reign supreme, commanding 27.24% of overall global ad spending on the Smaato platform, almost 3.5x larger than the next app category. However, the arts and entertainment apps that drive the highest eCPM are not music or dating apps – as one might expect given their popularity with millennials and Gen Z. In fact, the top three subcategories ranked by eCPM are: Home & Garden; Style & Fashion; and Science (which includes Weather apps). The report further notes that, the highest ranking categories in absolute eCPM terms "disproportionately appeal to Gen X and Millennial women (age 18-49) and especially mothers."
The report offers its perspective on the in-app versus mobile web question that continues to dog mobile advertisers and publishers. Smaato finds that Android OS is the clear eCPM king on their platform. The proof: Android's in-app eCPM growth rate in Q2 2016 vs Q2 2015 is more than 5 times that of iOS over the same period. However, don't neglect the mobile web, as advertisers still see high value in that inventory, with eCPM growth rates (+124%) exceeding those of in-app iOS.
When it comes to eCPM, a global perspective is highly important to publishers and app developers. eCPMs vary considerably by country, and the report shows some unexpected regions that are driving impressions. For example, all Scandinavian countries rank in the top 10 based on eCPM for Q2, and 3 of the top 5 countries with the highest eCPM growth rates are in Scandinavia. Norway is the top country for eCPM growth (764%).
The report then takes a closer look at Scandinavia, which it calls "a small, but mighty mobile powerhouse" thanks to its wealthy, tech-savvy population. Compared to EMEA, the Scandinavian market is expanding at a much faster pace – almost 7x more so. Sweden, leads the pack with mobile ad spend growth of +393%, followed by Norway (+316%); Finland (+196%) and Denmark (+155%). For these reasons and more, Scandinavia a key region for app developers and publishers looking to monetize their apps.