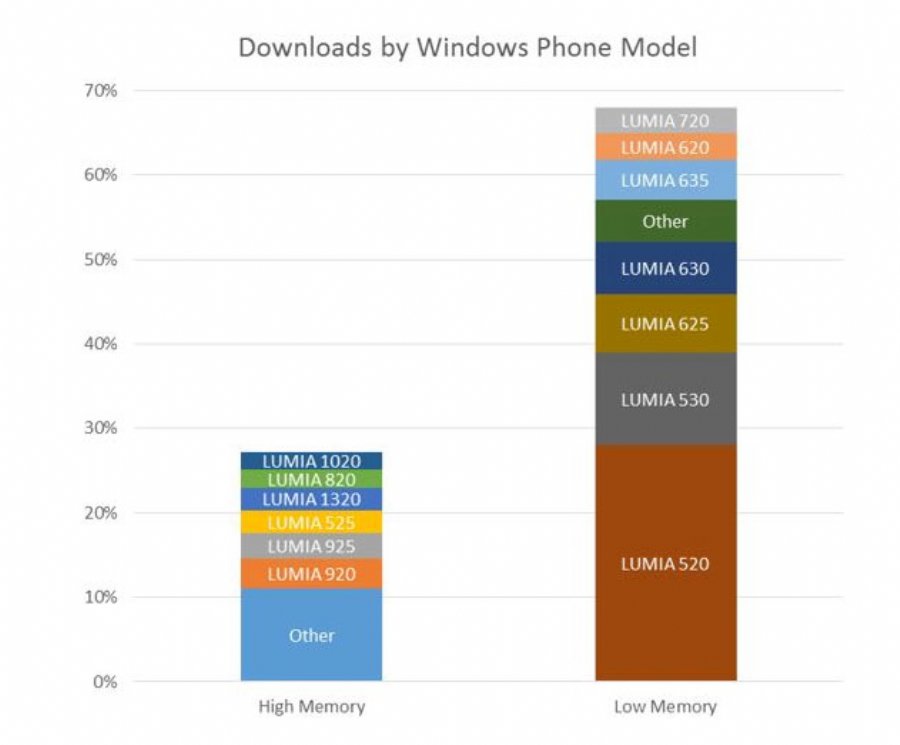 
59,262
The Windows Development Team has released its latest report in a recurring series that provides details about recent Windows App Store trends across categories, markets, and more. Data from the Windows Store is included with Windows Phone Store, to provide information about apps regardless of the devices targeted.
This latest update includes several new analyses including downloads by phone memory size, downloads by phone model, impact of carrier billing, and analysis of the best revenue-generating prices used for in-app purchase items.
Windows and Windows Phone 8.1 Adoption Trends
- Windows 8.1 is now the primary operating system for the Windows Store. In November 92% downloads of Windows Store apps were from customers running Windows 8.1.
- Windows Phone 8.1 now represents 65% of Windows Phone downloads while downloads from Windows Phone devices running 7.x account for less than 5%.
Windows Phone Device Breakdown
- The most common Windows Phone device today is the Lumia 520, representing more than 25% of all app downloads.
- For Windows Phone 7.x devices, a low-memory device is defined as 256MB or less of RAM and on 8.x devices low-memory is 512MB or less of RAM. Currently 71% of downloads are now coming from low-memory devices, so developers can potentially double their potential market by optimizing apps to run on low memory devices.
- Low-memory devices account for the top five devices based on total downloads and seven of the top ten.
App Downloads Per Category
- In November, Games was the most popular category for all devices, followed by Tools & Productivity, Music & Videos, and Social. This follows a trend of categories and rankings being fairly stable, with the main exception being the Game category for Windows, which continues to grow and now accounts for 42% of all downloads on Windows.
Categories with Highest Incremental Download Opportunity
- Categories that have the highest ratio of downloads per app are a function of total downloads versus total available apps in that category. For example, while Games is the most-downloaded category, Social has more downloads per available app.
- Social is currently the #1 category in both Windows Stores, with Photos, Games and Tools & Productivity in the top five, a trend that has been steady for the past 6 months.
Downloads by Market
- Windows Store is available in 242 markets and Windows Phone Store in 191 markets. Developers who promote apps to consumers outside their home market should consider which other markets are generating the largest number of downloads and if these markets might be relevant to their apps.
- The market with most downloads is United States, though the distribution of downloads shows there are other markets generating a significant number of downloads, such as China, India, France, United Kingdom, Brazil, Mexico and Russia.
Expansion of Carrier Billing in China, India and Brazil
- Many of the markets with high number of app downloads have low credit card penetration, making it difficult for these customers to purchase apps from most global app stores. The Windows and Windows Phone Store supports several alternate payment options including: Alipay, PayPal, and carrier billing (Windows Phone only) with 81 partners in 46 markets.
- Additions this December include Verizon Wireless in the U.S., as well as mobile carriers in new markets such as India, Vietnam, Brazil, and China, all of which are in the top Windows Phone markets. With these additions, the Store now has established connections with 46% of all subscribers worldwide.
Languages of Windows Store Customers
- Offering apps in English reaches roughly 25% of Windows Phone customers, and a larger percentage of tablet and PCs users. Adding Spanish, Mandarin, Brazilian Portuguese, and Russian increases market coverage to more than 50% of Store customers.
App Monetization Options
- Revenue analysis from November 2014 shows that paid apps, in-app purchase, and in-app advertising are the main monetization models, with in-app purchase and advertising generated the most revenue.
- For both Windows Stores, advertising is a growing source of revenue, and in November rose to 53% of total revenue. This trend is caused in part due to the fact that November and December are months where many advertisers increase their spending.
- In-app purchase of durable and consumable digital products is also an increasing source of revenue for Windows apps, and generates significantly more revenue than paid apps. Currently all of the top 20 apps and 88% of the top 50 apps use in-app purchasing.
- Paid apps continue to decline as a percentage of overall revenue as well as in absolute revenue. In August 2014, paid apps generated roughly 20% of developer revenue, dropping to 11% as of November 2014.
- In-app purchase is becoming a staple in both Windows and Windows Phone apps, across a wide range of options and price points. Today, in-app purchases account for 35% of developer revenue.
- The numbers show that of the in-app purchase price points that generate the most revenue, lower price points do not necessarily lead to increased revenue. While the majority of in-app purchases in the Windows Phone Store are at price points below $2.00, the top 3 highest grossing price points, ordered by total revenue, are $9.99, $4.99, and $19.99.
- The top 10 highest revenue price points in Windows Phone apps and games, in order of total revenue, are $9.99, $4.99, $19.99, $1.99, $0.99 $49.99, $79.99. $99.99, $2.99, $3.99. Revenue is a result of number of apps using the price point, the number of times the in-app item is purchased, and the price of the item.
You can learn more at the Windows Developer blog.