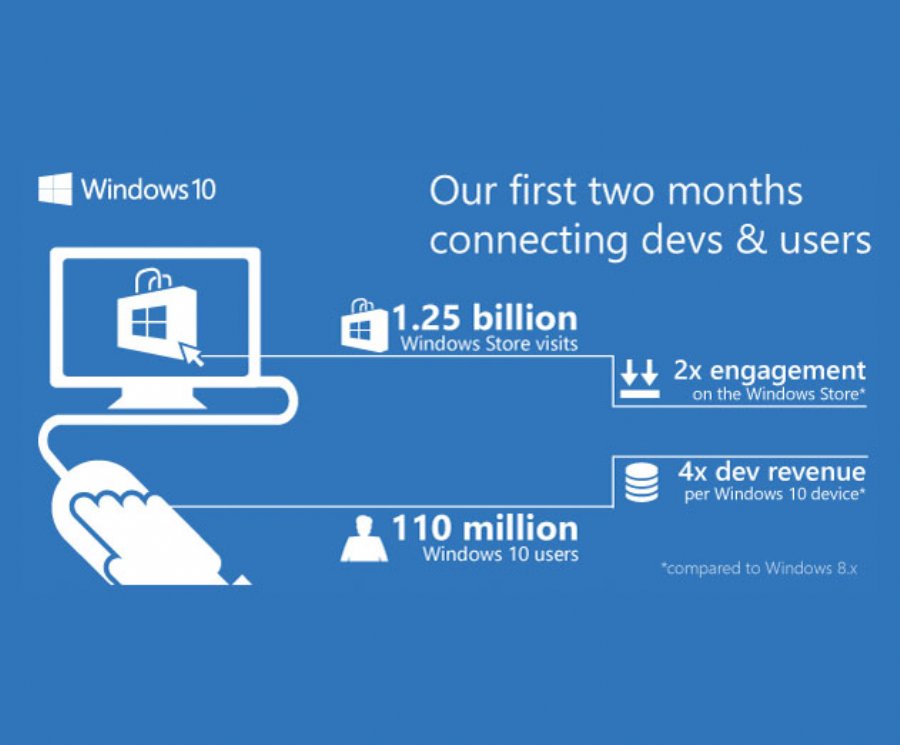 
11,959
According to the September Windows Store trends report, Windows 10 represents over 50% of all downloads, achieving this number in just over 60 days since its release. This analysis and more is available as part of a report published monthly by Microsoft to show Windows developers various s app monetization opportunities across categories, markets, and more.
The release of Windows 10 also brought the release of the unified Windows Store, a single place to find apps for all Windows 10 devices. This unified Store combines all linked apps as well as universal apps into one listing, so users can purchase an app once and it will work on all compatible devices.
Since its release, Windows 10 users have made more than 1.25 billion visits to the Windows Store, and for developers, Windows 10 translates into 2X the user engagement and 4X the revenue per user compared to Windows 8.x.
When focusing on Windows 10, highlights of the report include:
- Windows 10 Adoption: Windows 10, released July 29 and currently available for Windows PCs and tablets (mobile coming this fall) now accounts for more than 50% of all Windows Store downloads.
- Downloads by Category: Games is still the dominant category.
- Categories with Opportunity: Productivity is now the number one category opportunity for Windows 10 apps according to the Windows Dev Team.
- Downloads by Market and Language: Brazil continues to climb in the number of downloads as well as percentage of total downloads, while Brazilian Portuguese has jumped to the number three spot in downloads by language, and Turkish and Dutch enter the top ten languages for the first time.