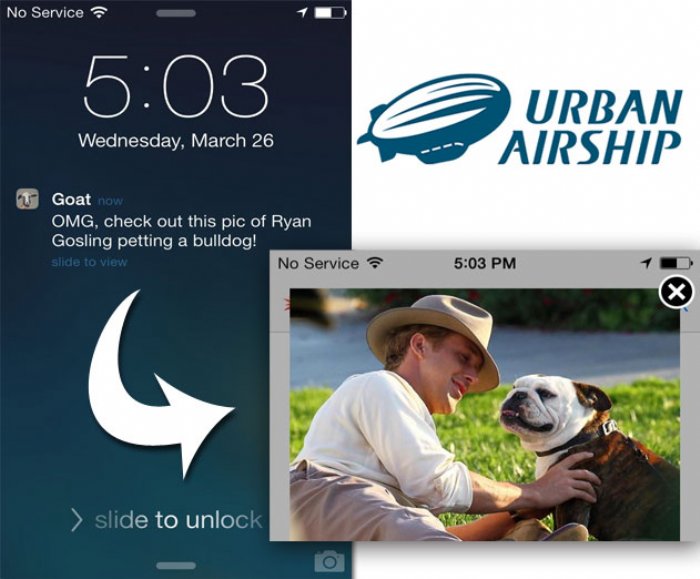 
3,801
UA will begin shipping version 4.0 of their mobile SDK for iOS and Android early next week. The new release brings several enhancements to the push messaging workflow – together they will be called the Actions Framework.

Actions will allow developers to send customized notifications that cause interesting things to happen when the notification is received or activated – designed to help you connect with what the app does in the end user's hand. The reason it's important? Actions will provide value to both savvy developers and those in nontechnical rules, making it easy to interact with users effectively.

Here's a good example of what an "action" is.

Have you ever received a push notification, tapped it on your device, and gotten dumped in the main screen of the app with no further context, asking "now what"? So have we, and it's a rather disappointing experience. Actions are an answer to that question.

Actions allow you to send customized notification payloads that cause interesting things to happen when a notification is received or activated. They're designed to help you connect what the app does in the end-user's hand, with what you send in the Push Composer.

When we talk about the Actions Framework in the abstract, we don't necessarily mean a mobile or server- side technology on its own, but rather a cooperation between the device and the messages sent to it. More specifically, the device needs to know how to perform tasks by name, with optional arguments, in certain distinct situations, with an optional result value.

Actions can be triggered either from incoming push payloads (in various app lifecycle states) or through user interaction in rich HTML content. In order to provide a consistent experience, we've established a convention for transmitting this information and for defining new, ad-hoc actions so that the framework can be extended to meet your application's needs.

What you get out of the box

Actions provide complimentary value to both developers and those in non-technical roles. For example, they provide for a convenient handling of your pre-existing deep link URLs, for responsive in-app navigation. Your counterparts in Product and Marketing can select these, or links to external apps and web pages from within the Push Composer, for a more relevant user experience.

With actions, you can dynamically add or remove tags with ease, either when the notification is opened, or from user interaction in Rich App Pages. Even if you don't have a need for a full-blown Message Center, our SDK and API now support Landing Pages, which are ad-hoc rich HTML pages that can be launched from a push and require no app-integration to use.

Best of all, because these features are deeply integrated with our latest SDK, API, and Push Composer, your app gets all the above power-ups without a single added line of native code.

Actions and the new SDK update are set to hit the Urban Airship dashboard on March 31st so be sure and watch for the official release there.