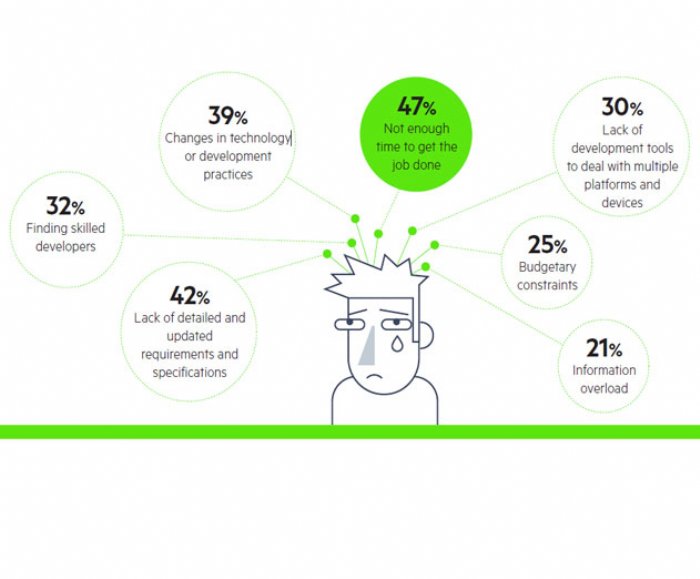 Study Shows DevOps Are Unsure On How to Approach Mobile Development


20,884
If there is any consensus on how developers and DevOps teams are approaching the mobilization of their efforts, it’s that there is no consensus.
A case in point is a new study conducted by Telerik, which surveyed 2,200 developers and IT executives to determine priorities and pain points surrounding application development - from desktop to mobile - as well as examine developer preferences, methodologies and approaches.
And they survey says…while mobile app development is routinely described as a priority, in both current app development and deployment, adoption is slow to grow.
Telerik points to three top insights from the survey:
(1) While mobile is an obvious priority to enterprise decision makers, widespread adoption is slower than anticipated, while desktop and web remain focus areas.
(2) Most developers are not widely collecting end-user feedback to optimize the development process.
(3) Despite being tasked with heavy workloads, the majority of surveyed developers are not leveraging currently available technologies, such as cross-platform and multi-platform solutions to maximize productivity.
Of particular interest is that desktop and the web remain priorities. It makes sense, as many companies may feel they don’t need the native functionality of devices (GPS, voice recognition, etc.) to accomplish what they need to accomplish in communicating with their customer base. A responsive, mobile optimized web presence ends up getting the job done, of course in the most basic way.
This approach is reinforced as the study shows that more than half of respondents are not yet developing for mobile, due to current workload restraints and of those developing for mobile, the majority are focused on Web/HTML5.
The respondents were a mix of developers, dev managers and dev team leads (59%); architects and analysts (12%), C-level executives (10%) and more. Most industries were represented: financial services, healthcare, government, retail, etc. The individuals work for organization sizes ranging from startup (29%) to enterprise/global enterprise (29%), with the largest respondent segment falling within small-to-mid-sized business (SMB) (42%).
And this is not a US centric response, as there was wide geographic diversity among survey respondents, with 31% coming from North America, 36% from Europe and 23% from Asia Pacific.
The resulting report is available as a PDF and is available as a free download on the Telerik website.