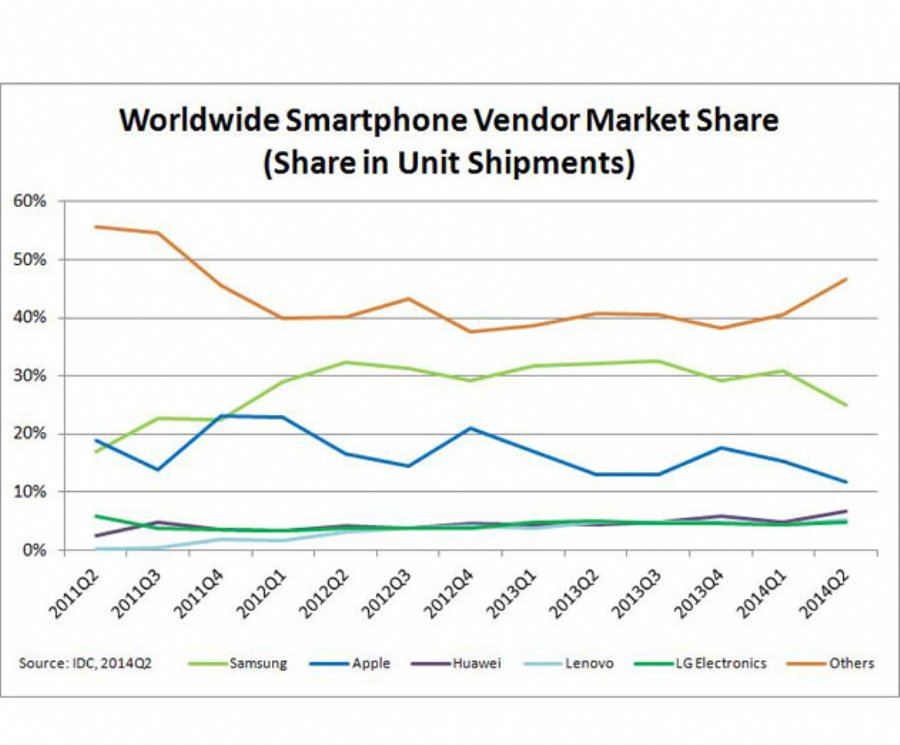 
2,211
According to the International Data Corporation (IDC) Worldwide Quarterly Mobile Phone Tracker for the third quarter of 2014, increased emphasis on emerging market smartphone releases drove global smartphone shipments above 300 million units for the second consecutive quarter.
According to preliminary data, vendors shipped a total of 327.6 million units during the third quarter of 2014 (3Q14), resulting in 25.2% growth when compared to the 261.7 million units shipped in 3Q13 and 8.7% sequential growth above the 301.3 million units shipped in 2Q14.
"Despite rumors of a slowing market, smartphone shipments continue to see record-setting volumes," said Ryan Reith, Program Director with IDC's Worldwide Quarterly Mobile Phone Tracker. "We've finally reached a point where most developed markets are experiencing single-digit growth while emerging markets are still growing at more than 30% collectively. In these markets, smartphone price points are making mobile computing possible where we once expected feature phones to remain dominant. This is great news for overall volumes, but the challenge has now become how to make money on devices that are quickly becoming commodity products. Outside of Apple, many are struggling to do this."
A driving force behind the record smartphone volume was the combined effort of the vendors trailing market leaders Samsung and Apple. According to the IDC the next three vendors, Xiaomi, Lenovo, and LG Electronics, all posted market-beating growth.

The IDC report pointed to these third quarter highlights:

- While Samsung remained the leader in the worldwide smartphone market, it was the only company among the top five to see its shipment volume decline year over year. With continued competitive pressure coupled with cooling demand for its high-end devices, the company's volumes have fallen from their previous highs at the start of the year. Although Samsung has long relied on its high-end devices, its mid-range and low-end models drove volume for the quarter and subsequently drove down ASPs.
- Apple took the wraps off its highly anticipated iPhone 6 and iPhone 6 Plus, and in the process posted its largest third-quarter volume ever. Although the company posted strong results of 10 million units sold during its initial launch weekend, what should not be overlooked is the sustained demand for its older iPhone 5S and 5C models, which comprised the bulk of its volume for the quarter.
- Xiaomi jumped into the top 5 list for the first time at the number 3 position thanks to its focus on China and adjacent markets, which resulted in triple-digit year-over-year growth. Key to its success was the launch of its Mi4 smartphone in August, which was positioned as a high-end alternative to the status quo. What remains to be seen is how quickly the company can move beyond its home territories to drive volumes higher.
- Lenovo tied for fourth with LG, as its results improved on steady gains at home and abroad with the share of non-China shipments rising steadily to hit 20% in 3Q14, up from 9% a year ago. Sub-US$100 smartphones like the A369i and A316 drove volumes from emerging markets in Asia/Pacific and the Middle East and Africa. Domestically, it launched a number of 4G handsets, with some at lower price points.
- LG's strategy to court the market with low-cost smartphones has paid enough dividends to push its total volumes past the 15 million unit mark for the first time in the company's history. Its F-and L-series smartphones have earned a warm reception, within both emerging and developed markets. At the same time, LG released its flagship G3 to maintain a presence in the high-end of the market, lifting the company's overall LTE footprint.
To view more information about the report visit the IDC website.