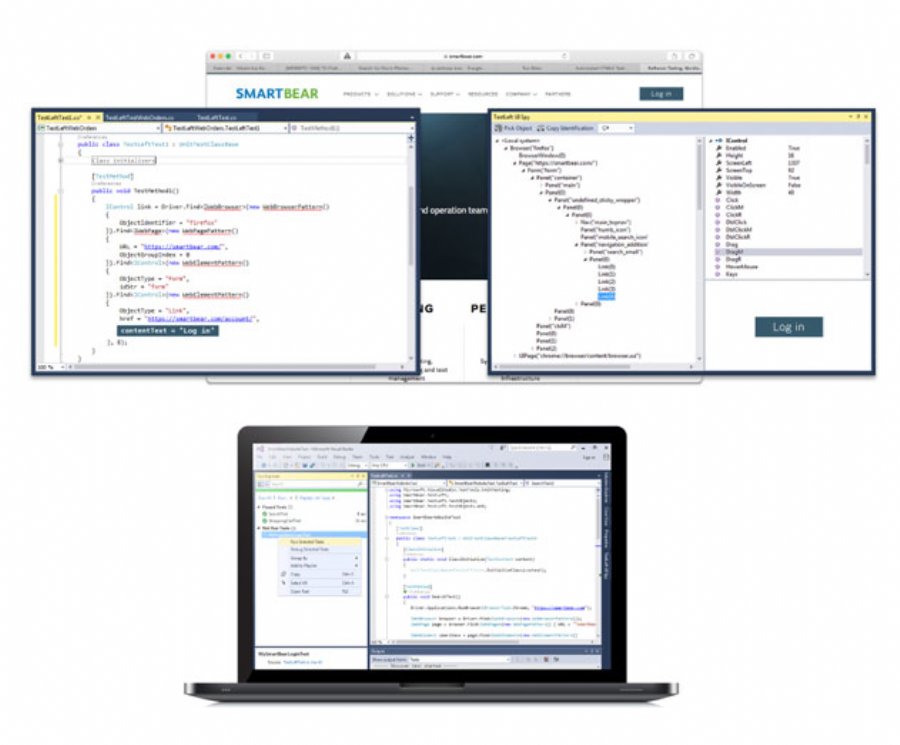 
7,346
SmartBear Software has released a new developer focused test automation tool, TestLeft which allows developers working in an Agile and continuous delivery environment to create tests within IDEs, which helps reduce test creation and maintenance time.
TestLeft is a testing tool for developers who are testing in Agile teams. It fully embeds into standard development IDEs such as Visual Studio, which helps minimize context switching and allows developers to create test cases in their favorite IDEs.
Additionally, TestLeft comes with visual tools, which assists developers to identify correct object properties for application under test. Using TestLeft, developers can generate test code by dragging and dropping identifiers over objects on the screen.
The platform provides access to built-in methods and classes for code completion and fast scripting. Tests created by TestLeft can be brought within SmartBear’s TestComplete for consumption by testers.
TestLeft enables object-level recognition on the UI, which developers can leverage from within Visual Studio. The tool compliments SmartBear’s Java and .NET customer base using TestComplete and TestExecute. The integration is done through a simple API call from Visual Studio to TestLeft’s testing engine, making the integration easy to replicate with other IDEs and development platforms.

The platform provides the ability to:

- Fully Integrated in Development IDEs: Developer’s can create functional automated tests in a their favorite IDEs with no need to maintain and move to a different testing ecosystem in order to create and run automated tests. Developers can quickly identify correct object properties and methods using visual tools and can generate test code by dragging and dropping identifiers over objects on the screen.
- Reduce Test Creation Time:  A quick search criteria list can be set up during a testing session to identify objects matching specified values and properties. Built-in methods and classes are also available for code completion and faster scripting.
- Fits into a Continuous Integration Process: TestLeft fits well within existing Dev and QA ecosystems. It works out of the box, with Source Control Management (SCM) systems such as Team Foundation Server or Continuous Integration tools such as Jenkins.
- Improve Collaboration Between Development and Test Teams: Build test scripts based on unit testing frameworks such as MSTest and NUnit. Use TestComplete’s object identification spy and libraries within TestLeft for accelerating the test development process- never waste time on building a framework. Bring tests created using TestLeft into TestComplete for consumption by other QA team members. Observe progress of TestLeft and TestComplete tests as well as reporting across both tools using a centralized interface of TestComplete.
- Scale Automated Tests: There is no need to wait to run tests. Fast feedback is provided by running multiple tests in parallel. Test can be run behind a firewall, in the cloud, or on VMs. Once tests are completed, a full report of the run along with console logs and snapshots is provided.
- Support For Multiple Scripting Languages and Technologies: Author tests in object-oriented programming languages, such as VBScript and C#. TestLeft comes with support for multiple AUT technologies, including .NET, WPF, Windows Native, Java, Web among others. Compatibility with leading web frameworks ensure developers can use one test for cross-browser compatibility and testing the latest releases of Chrome, Edge, and Firefox among others.