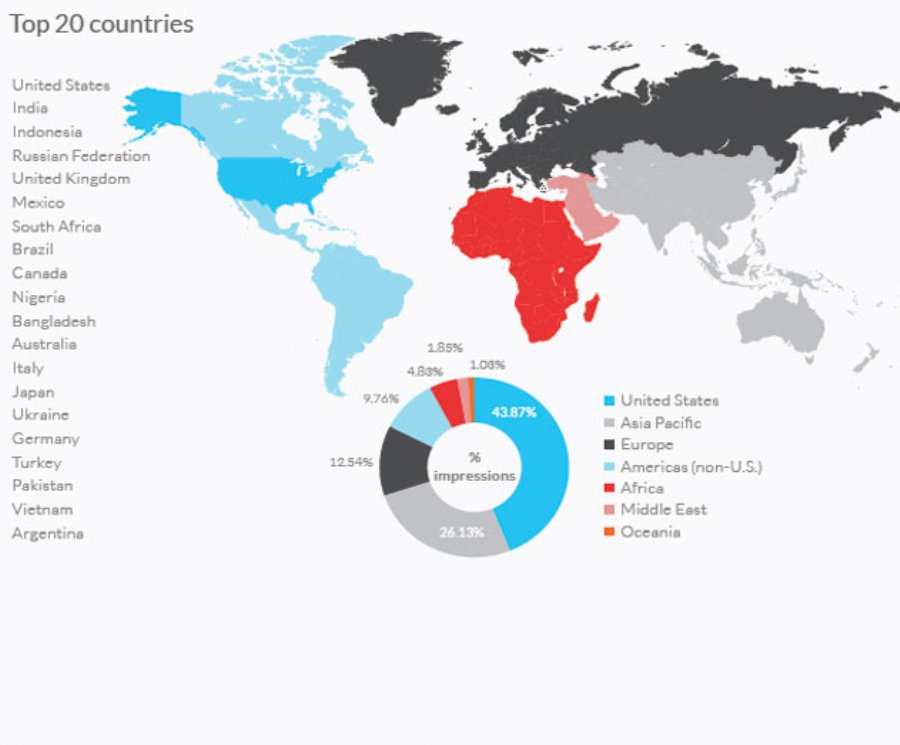 
24,658
Opera Mediaworks has released its latest State of Mobile Advertising report which shows that Android captured the majority (63%) of mobile ad traffic in Q4, but Apple retained its lead in revenue generation.
The quarterly report is based on trends and insights from the company’s mobile ad platform. It indicates that Apple’s favorable position in Western markets, such as the United States, Germany and the United Kingdom, helped the company retain the revenue lead. The report also indicates that, in these markets, high-value rich-media and video-advertising campaigns are more common. Since iOS dominates in these markets, monetization levels are highest, with over 51% of revenue.
Other findings from the report include:
- The iPad continues to show monetization potential, accounting for nearly 13% of revenue, with a mere 5% of impressions.
- The high volume of mobile app usage vs. mobile browsing in Western markets also drives a healthy user-acquisition market. To acquire more users, publishers and app developers use direct response, or performance, mobile ads to drive app downloads. The total spend for these types of campaigns has risen over the past two years, but the cost-per-installation rate (CPI) has remained stable, and even slightly declined, in 2014, the report found.
- The Games Category leapt ahead in both traffic and revenue in 2014. In 2013, games represented 5% of impressions, but in Q4 2014 it captured a 14% traffic share. Revenue numbers were even more impressive, as the category grew year-over-year from 3% of revenue to 21.4% of revenue in Q4 2014.
- As seen in previous quarters the Social Networking category received the most traffic (28.8%), while the Music, Video & Media category generated the most revenue (21.6%).
- The United States still dominates the global mobile ad economy, with nearly a 44% share of impressions. But, other international markets are beginning to catch up, with Asia Pacific coming in second, at 26.1%. This is nearly twice the share of Europe, at 12.5%.
- By the end of 2014, the non-U.S. Americas also emerged as a significant mobile advertising market, with a 9.8% share of impressions, led by Mexico, Brazil, Canada and Argentina. Africa, which had a tiny (1%) share at the end of 2013, grew to 4.8%
To see the full report, visit the Opera Mediaworks website.