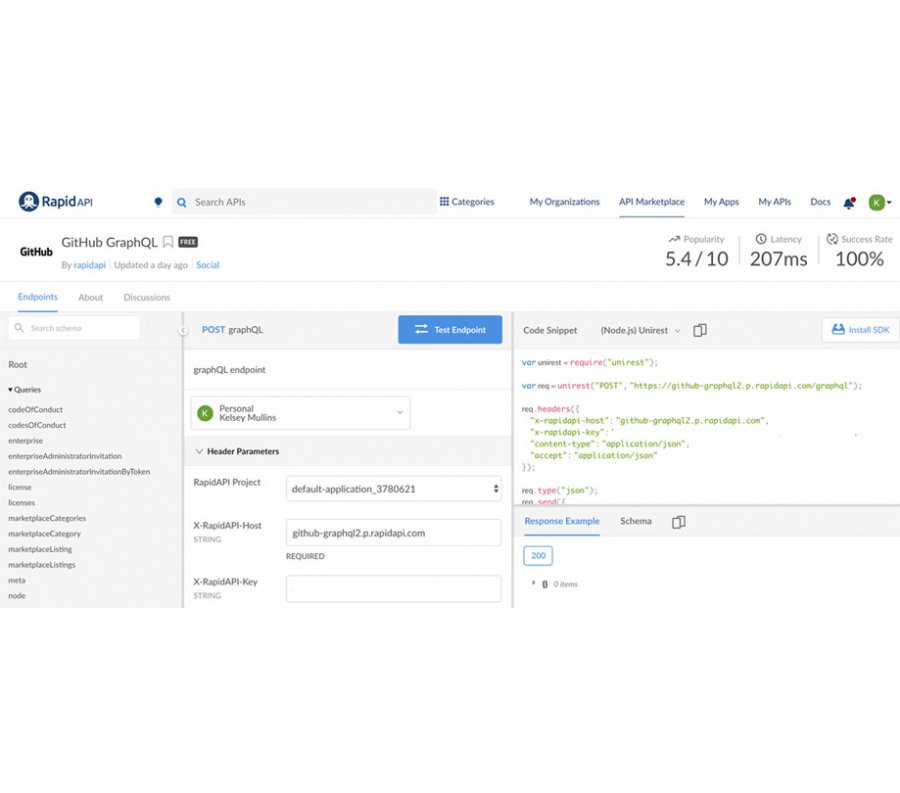 RapidAPI announced it has added support for GraphQL APIs to its API Marketplace and has launched the first wave of GraphQL- based APIs including GitHub, GitLab, Yelp, AniList, Shopify, and more. Currently, RapidAPI has more than 10,000 REST-based APIs from companies such as Microsoft, Twilio, SendGrid, Nexmo, Skyscanner, Crunchbase, and Google. With the addition of GraphQL support, developers on RapidAPI’s Marketplace will have a choice between native GraphQL and REST APIs, enabling them to access the RapidAPI Marketplace to find, connect, and manage both types of APIs using a single SDK, API key, and dashboard. Developers will have full GraphQL-native experience on RapidAPI as they will be able to explore schema and develop, build, and test queries.

GraphQL is a data query language and specification developed internally by Facebook in 2012 before being publicly open-sourced in 2015. GraphQL APIs have risen in popularity because they use a single endpoint to retrieve all the required data, fetching only what is needed which reduces the number of queries. Thousands of developers and hundreds of companies are already using GraphQL APIs to build their applications. A recent survey entitled, “The State of Javascript” found that of the 20,000 JavaScript developers surveyed, almost 21 percent reported that they had used GraphQL and would use it again. More than 62 percent reported that they would like to learn GraphQL.

GraphQL API providers will be able to take advantage of the same benefits that existing REST API providers currently enjoy as part of the RapidAPI Marketplace including:

“Responding to the growth of the API economy, RapidAPI helps developers and organizations use APIs and microservices to accelerate the delivery of software and services to market, reduce duplicative work, and advance product innovation,” said Iddo Gino, RapidAPI Founder, and CEO. “The addition of GraphQL APIs underscores our commitment to bring leading APIs and services to the RapidAPI Marketplace. Our mission is to create one place to find, connect, and manage all APIs - regardless of type. The addition of GraphQL support is a big step towards that. We love GraphQL and believe it will have a key part in the future of APIs - we used it ourselves to build the platform. It was important to us to provide support for GraphQL as a first-class citizen on RapidAPI.”