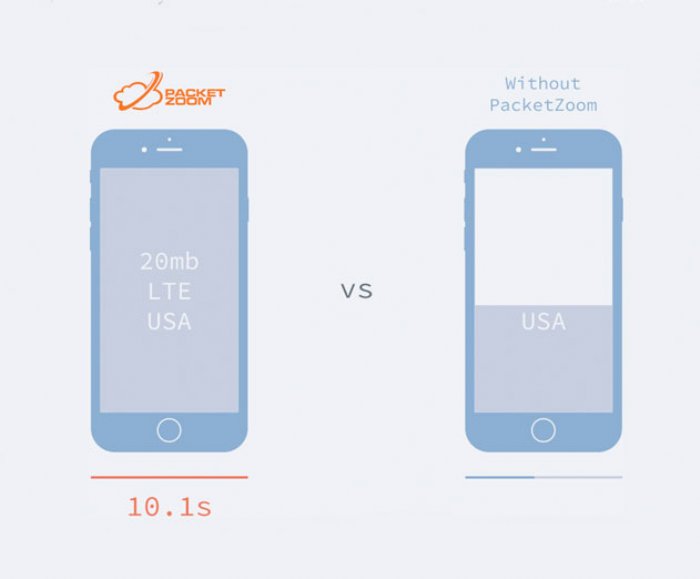 
10,458
PacketZoom is launching what it calls a Mobile Speed as a Service (MSaaS), with a new platform that addresses problems mobile app users experience with app performance.
The service is designed specifically for mobile app publishers and has the potential to speed up app content download time from the Cloud by up to 10 times. PacketZoom moves beyond the 40 year-old TCP protocol, leveraging a new protocol that identifies the device as the address for data packets and accommodates for the intermittent nature of mobile connections in an intelligent, fault-tolerant way.
PacketZoom is designed to work particularly well in low-bandwidth networks or areas with spotty coverage. To leverage the PacketZoom service, mobile app developers drag and drop the PacketZoom Speed SDK into their app, which immediately provides improved speeds for downloading cloud content.
The underlying PacketZoom protocol eliminates legacy network techniques that have been critical to mobile-network operation but delay content delivery including DNS lookups, three-way TCP handshakes, slow starts, and aggressive back-off to reduce packet loss. By eliminating the most challenging obstacles of legacy technology, PacketZoom enables delivery of mobile app content up to 10 times faster than otherwise possible.
PacketZoom also handles connections differently than legacy protocols, which consider the device's IP address as the destination for data packets. By identifying the device itself, and not its IP address, PacketZoom accommodates for the intermittent nature of mobile connections in an intelligent, fault-tolerant manner, ensuring continuous connectivity as any mobile device moves across networks.
And because the PacketZoom protocol incorporates "situational awareness," it always knows a device's location, tracks dead zones, and recognizes packet drops and other critical factors in real time. All these capabilities are provided through the PacketZoom stack without any client or service side code changes.