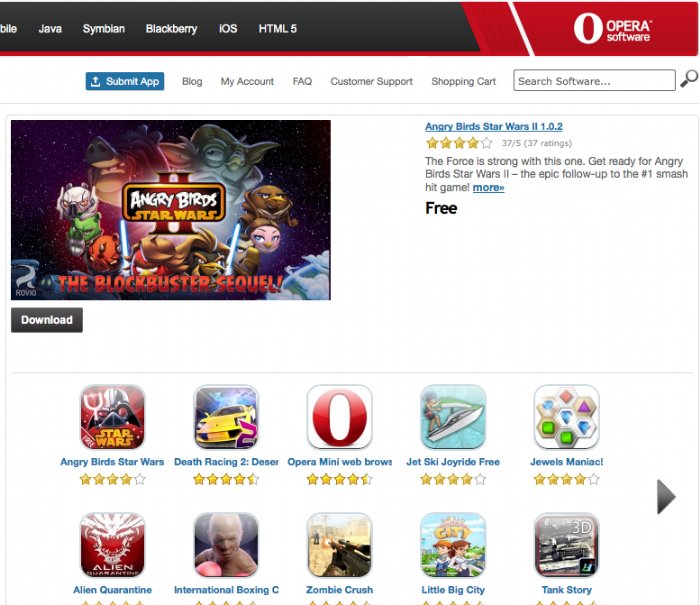 San Mateo, Calif. - October 24, 2013 - The Opera Mobile Store, the fifth-largest mobile app store in the world, today announced that it has tripled the size of the store in the last 12 months, currently offering more than 140,000 apps. The Opera Mobile Store provides more than 75 million monthly visitors, an increase of 63%, with mobile apps and games across most platforms, including Android, Java, BlackBerry, Symbian and iOS.

Over the first half of 2013, the Opera Mobile Store team introduced several major changes, improving the store platform with useful features for customers, developers and advertisers, resulting in significant success in traffic-to-downloads conversion. This includes the following:

Other trends in usage numbers for the Opera Mobile Store are also clear.

Upcoming markets such as India, Brazil, South Africa and Indonesia continue to grow. By the end of September 2013, their cumulative download share represented 35% of the Opera Mobile Store’s global downloads.

The biggest market share for mobile apps in these countries still belongs to the low-cost, J2ME-powered mobile devices, with over 49% of the total downloads. These statistics confirm that Android-powered smartphones are slower in penetrating developing countries.

Across all countries, total downloads of Android apps from the Opera Mobile Store grew 18.5% to 38.4% of total app downloads in a year, Java apps downloads have decreased from 67.8% to 43.9%, Symbian has gone from 10.3% to 9.9% and Windows Mobile has shifted from 1.9% to 0.4%. Gaming apps based on the recently-introduced HTML5 online-gaming platform has had 2.6% of downloads on the Opera Mobile Store.

The top-10 downloaded apps to date in the Opera Mobile Store are as follows (by number of monthly downloads):

Users can access the Opera Mobile Store via Opera's flagship Opera Mini, Mobile Classic and Opera for Android mobile browsers and has been proven as an effective mobile-content distribution platform in several of the world's fastest-growing mobile markets, including India, Russia, Brazil, Indonesia and South Africa. Users can also access the Opera Mobile Store by browsing to apps.opera.com on their phones.

Besides the reach of the Opera Mobile Store distribution platform, Opera offers marketing and distribution options that extend beyond the mobile store to reach the more than 260 million users of Opera's mobile browsers worldwide.