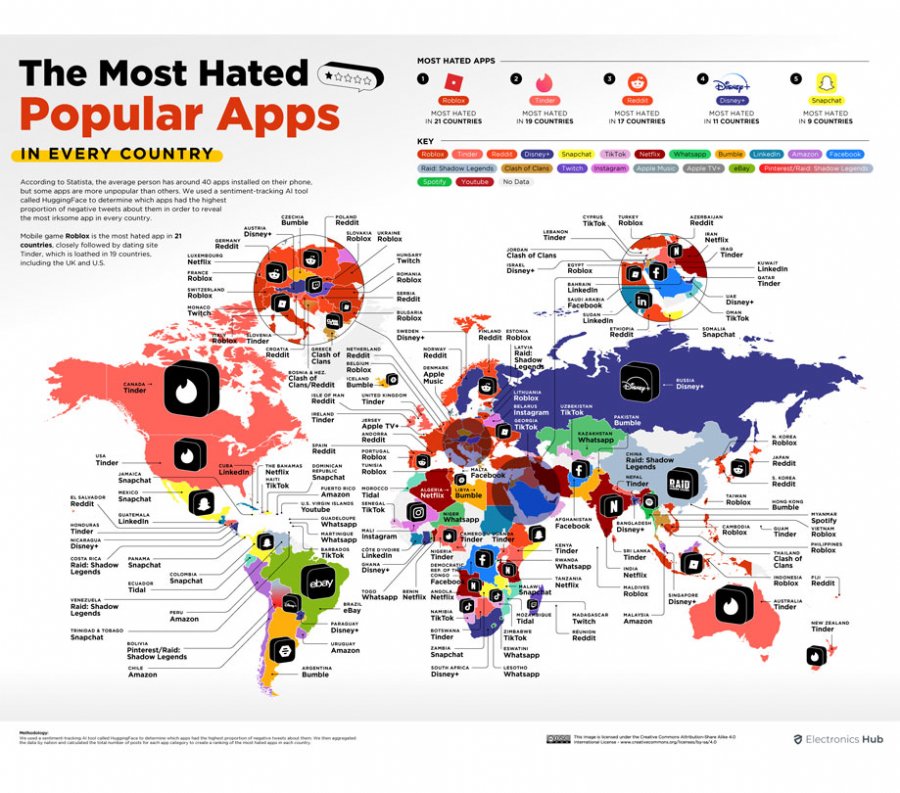 Most hated apps in every country

Electronics Hub has announced findings from their recent study about the most hated apps in every country and U.S state. Tinder, Roblox, and Disney+ were found at the top of the lists, and the data was compiled for the app categories of Social Media, Dating, Mobile Games, Entertainment, and more.

According to a recent study by DotNek, smartphone users worldwide collectively download 250 million apps daily on average. While app usage is higher than ever, customer satisfaction with mobile apps has fallen in recent years, driving many mobile users into a love-hate relationship with their smartphones and the apps that populate them.

There is a multitude of reasons why an app might frustrate its downloaders. A poor user interface, an abundance of ads, and glitchy software drive users crazy and are the source of many negative app store reviews. In other cases, the content of a well-designed app may be the cause of anger. While many have found success on dating apps like Tinder and Bumble, or games like Roblox and Genshin Impact, many have also found extreme disappointment, generating a legion of outspoken haters against the software.

The most hated apps in every country and U.S. state

Just as taste varies around the world, so does distaste. To find out how attitudes toward apps and smartphones vary across the globe, experts at Electronics Hub analyzed Twitter data to determine the most hated apps in every country and U.S. state. 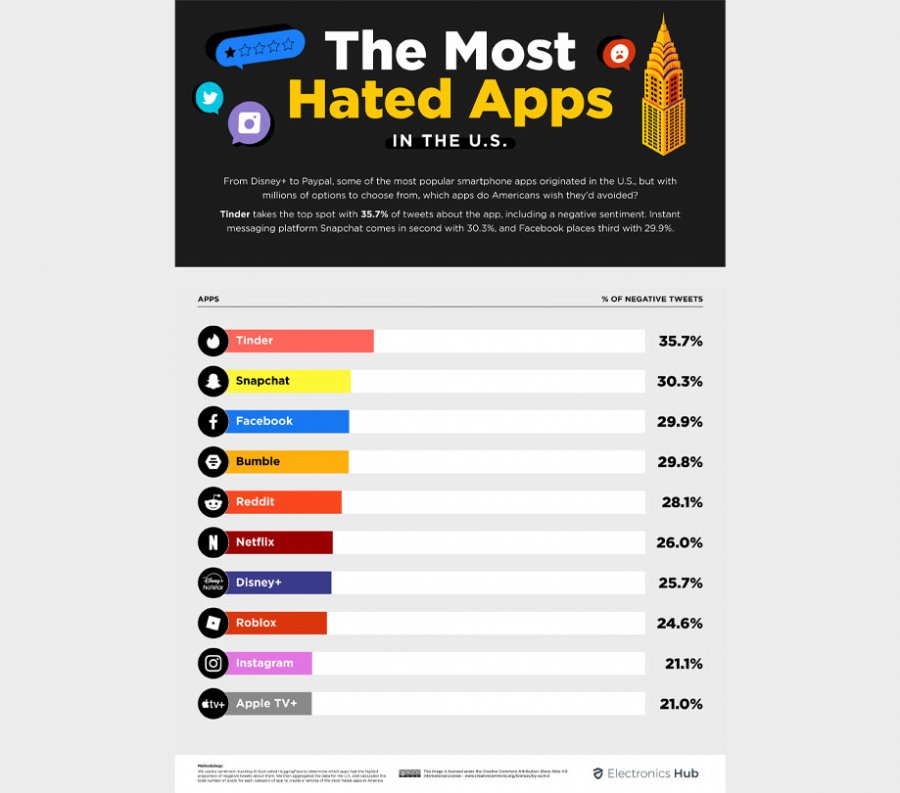 To compile the data for this campaign, Electronics Hub curated a list of apps for popular categories, including Social Media, Dating, Mobile Games, Entertainment, Cryptocurrency, and Money Transfer. They pulled together a large sample of Twitter posts related to each app from the list.

The team then filtered out the tweets posted by users where their location is unrecognizable or missing, leaving us with 3,013,198 tweets in total. They passed every tweet with a place assigned through the HuggingFace Sentiment Analysis AI model. Negative tweets were calculated if the probability of "negative" returned by the model was greater than 0.5.

Finally, Electronics Hub calculated the percentage of negative tweets for each country and U.S. state, isolating the most hated app overall and for each category. They also extracted the 10 most hated apps overall in the United Kingdom, United States, Canada, and Australia.

The data was collected in April 2022.

The study’s full dataset can be found here: https://bit.ly/MostHatedApps 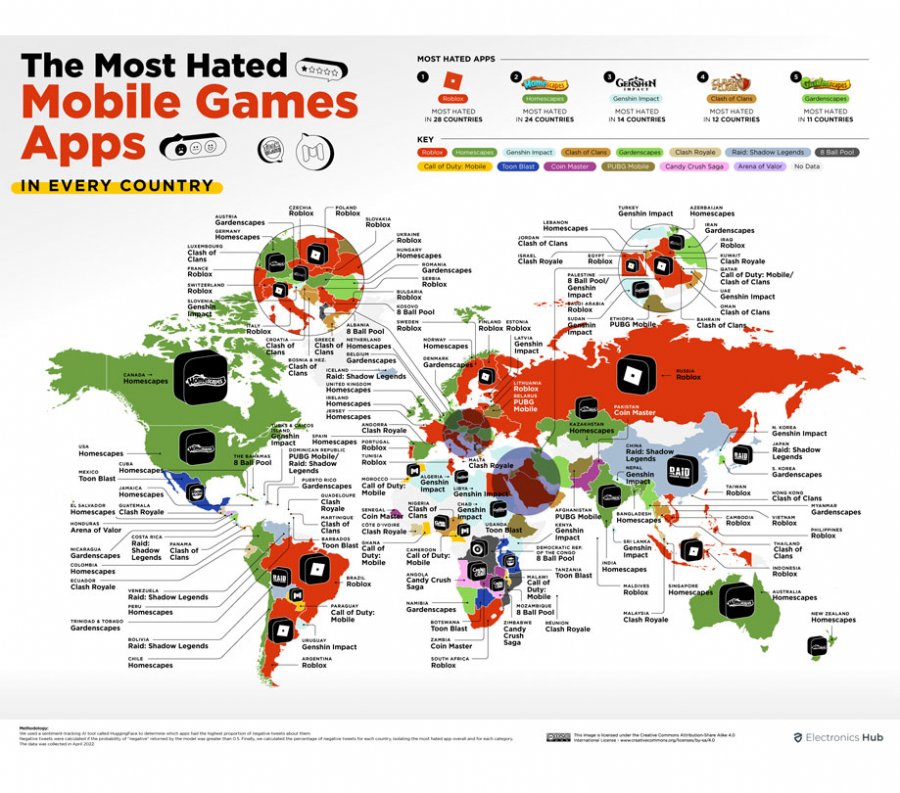 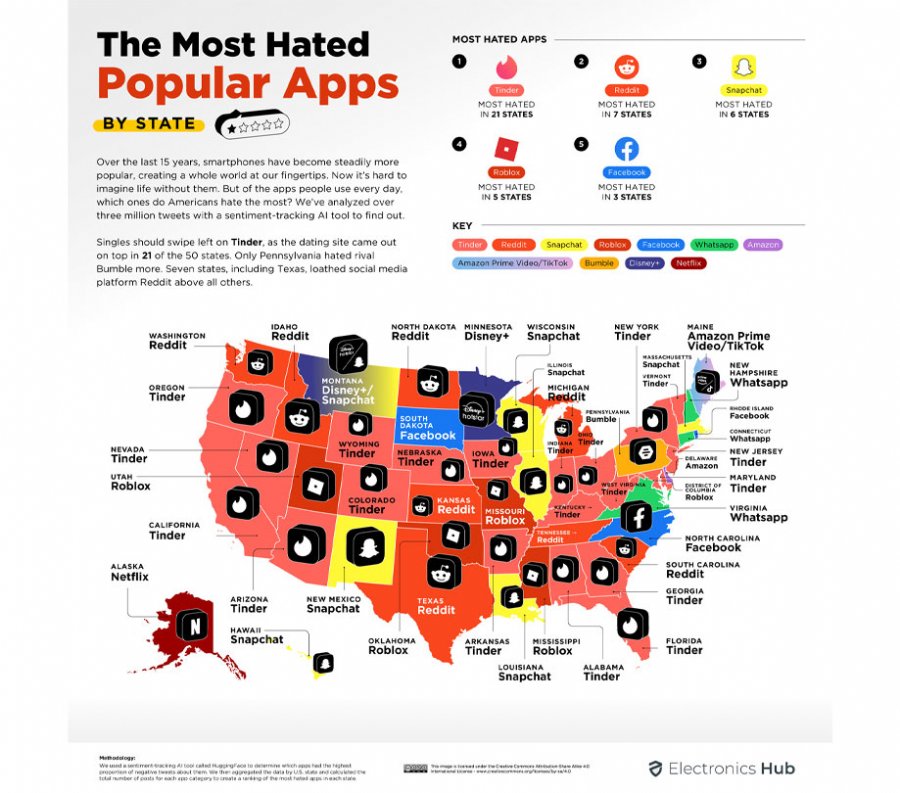 The top 10 most hated apps in Canada

The top 10 most hated apps in Australia

To view the original source of the study: