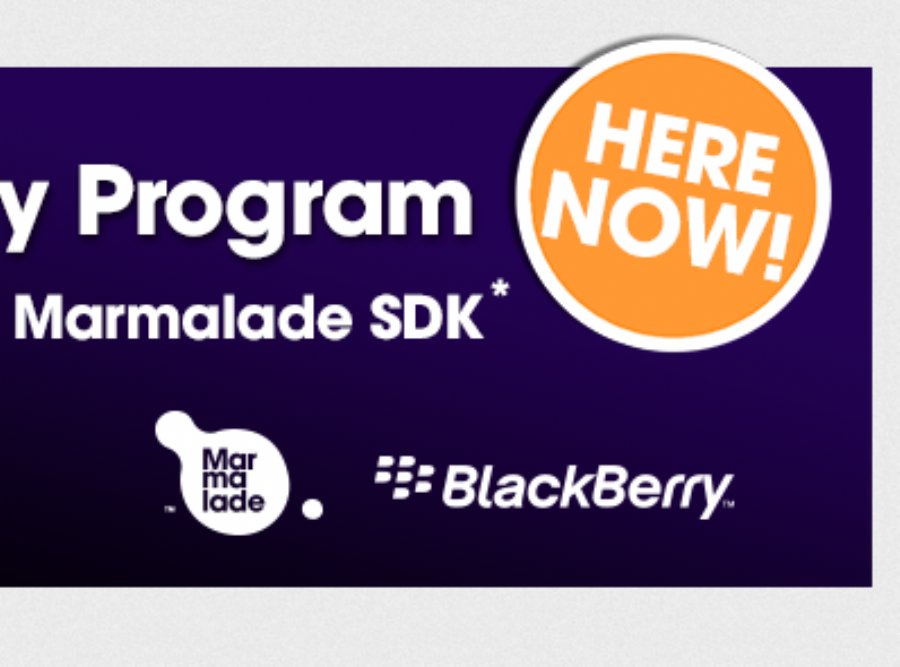 
930
Marmalade – the award-winning cross-platform development tool – today announced the launch of a new offer where indie game and app developers can claim a free Marmalade SDK Licence.
From today, eligible developers will be able to qualify for the offer by registering on madewithmarmalade.com/blackberry then downloading a free evaluation version of the Marmalade SDK. The first 300 to upload their draft BlackBerry 10 app to the BlackBerry® World™ storefront will also qualify for a BlackBerry® 10 Dev Alpha device to test their app. Once the final version of the app has been approved for download on BlackBerry World, the free 12-month licence will be awarded.
As the smartphone operating system landscape expands and developers look to support the powerful BlackBerry® 10 platform, Marmalade’s cross-platform tool becomes increasingly valuable to developers looking to reach a wider consumer audience and maximise the return on the investment made in their app or game. This offer, the second phase of a successful on-going relationship between Marmalade and BlackBerry, will make it even easier for savvy developers to release on the highly successful BlackBerry World store. BlackBerry World already lists over 100,000 apps for BlackBerry 10 smartphones, and by using Marmalade to target BlackBerry 10 smartphones, developers can produce high performance games and apps in a way that doesn’t limit them to any one ecosystem in the future.
The Marmalade SDK provides developers with a powerful cross-platform tool that enables deployment to multiple platforms from a single codebase. Working in C++ or Lua, apps and games that are made with Marmalade can be developed directly for BlackBerry 10 smartphones as well as a range of other mobile and desktop operating systems, and selected Smart TV platforms.
Harvey Elliott, CEO, Marmalade said, “We’ve been very impressed with the success of BlackBerry 10 and our community’s reaction to it has been overwhelming. Marmalade developers have already created some fantastic games for BlackBerry 10 using our powerful cross-platform SDK, and this offer will enable more developers to reach more customers.”
“BlackBerry’s position as a world-class platform for games and apps makes it very attractive for developers of all sizes,” said Alec Saunders, VP of Developer Relations and Ecosystems at BlackBerry. “With this offer for indies, we’re opening the door for more new talent to bring even more incredible experiences to app-hungry BlackBerry 10 customers everywhere.”