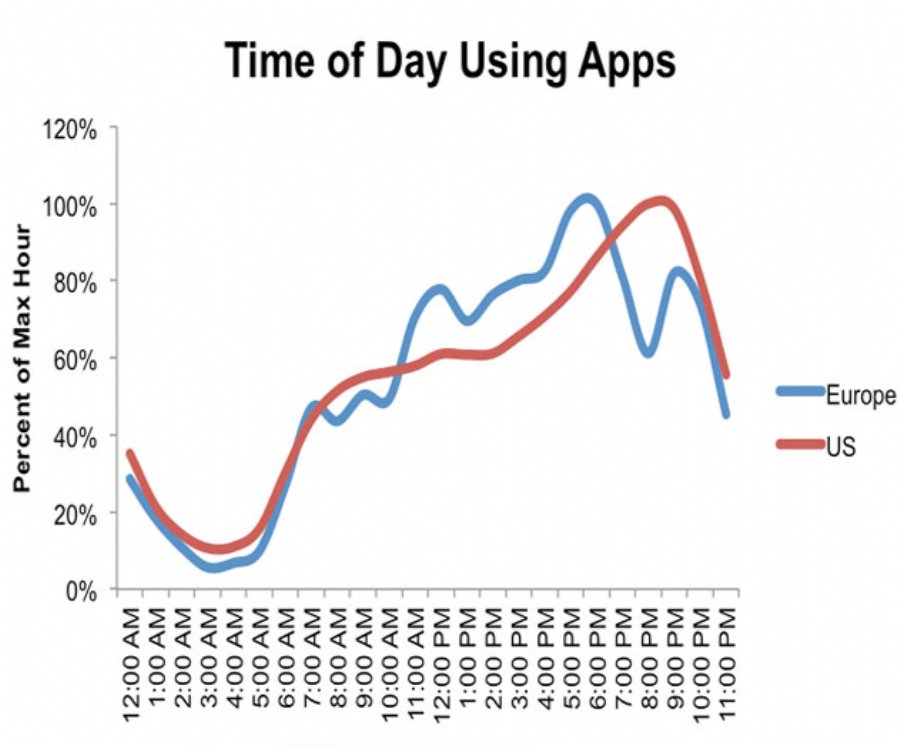 
1,983
Localytics has recently posted its insight into opportunities to market apps to the European market. Localytics data from both European and US markets reveals that the European user base represents a huge opportunity for companies with a mobile presence.
The report was posted on the Localytics’ website by Allison Averill, a business analyst and content marketing specialist at the company. She indicates that European app users are interested and engaged in their apps, opening them more frequently and spending more time in them than US users.
At a high level, European app users don’t immediately appear different from their American counterparts: both groups are increasingly attached to their devices, with strong growth in the average length of their app sessions across phones and tablets in 2013. In both the US and Europe, approximately 20% of apps were opened just once, while 35% were opened eleven or more times. The average monthly app user retention also follows a strikingly similar pattern in both regions, with six month app retention at 13% in Europe and 12% in the US.
Allison points to some surprising differences that could affect how apps should be marketed to European and US user bases.
According to the data, daily time spent in apps, calculated as session length x number of app launches, was 18% higher for European app users in the end of 2013 than for US app users. This was primarily driven by a strong increase in the session length of Europeans in Q4.
Throughout 2013, the average session length of European users was 5% lower than US users at 4.89 minutes, compared to 5.18 minutes for US users. However, while the US edged Europe for higher average session length overall in 2013, European app users actually had a more consistent increase and in Q4 they surpassed US users in session length, leading to European users spending an overall greater time in apps at the end of 2013.
From January to December, average session length in Europe jumped by over 2 minutes, which represents a 51% increase. Over the same time frame, the average session length in the U.S. wavered, increasing only 12% from January to December, and ending the year trending downwards.
The upward trend in session length among European users signifies that opportunity is ripe for app publishers and marketers to engage with European users. Longer session length can mean more data on in-app behavior, and more opportunities to interact with users in the app via in-app messages and potentially using push messages to keep users updated on new offers and events, or to remind them to come back into the app.
When comparing the times of day users from Europe and the US use their apps, Localytics’ data shows that European users are more active on apps throughout the afternoon, from 11am until about 6pm, when their app use peaks. There is then a sharp decline in use from 6pm-8pm, typical dining hours, before a second peak around 9pm.
For the US app use climbs throughout the day with no breaks, peaking at 8pm, but not dropping below 80% of peak until after 10pm which Allison suggests indicates that while many Europeans unplug during dinner, Americans remain glued to their mobile devices until bedtime.
She advizes the usage data is enlightening for app publishers who send push notifications and want to reach users when they’re most engaged with their phones. Rather than sending a message to all users at the same time, marketers are likely to see better results by segmenting users by location and scheduling different delivery times. According to our data, the best time to reach European users is late afternoon, from 4-7pm, local time when app use is above 80% of the max. The best time to reach US users is from 6-10pm local time.
The report shows that European users spent 359% more time in sports apps and 130% more time in gaming apps than their American counterparts, but fell behind the US in business and finance apps, where US users spent 579% more time and 168% more time respectively. Other app categories in which European users spent more time than Americans include music, lifestyle, weather, and health & fitness. US app users spent more time in productivity, utilities, books, social networking, and entertainment.
Localytics’ take from the data is that there is a tremendous opportunity for app marketers and developers to grow their business among European users. As the data indicates, European app users are interested and engaged with their apps, spending more time in them than US users.
App marketers should consider tailoring their app strategies to the particularities of the European app user; they are on their mobile devices at different times, they launch apps more frequently and spend more time in the apps, and they have strong inclinations towards certain app categories such as sports and gaming relative to their US peers. Understanding these differences – and similarities – will help app marketers target their efforts more effectively and create more value for European users.
For more information or to view the full report, visit the link below.