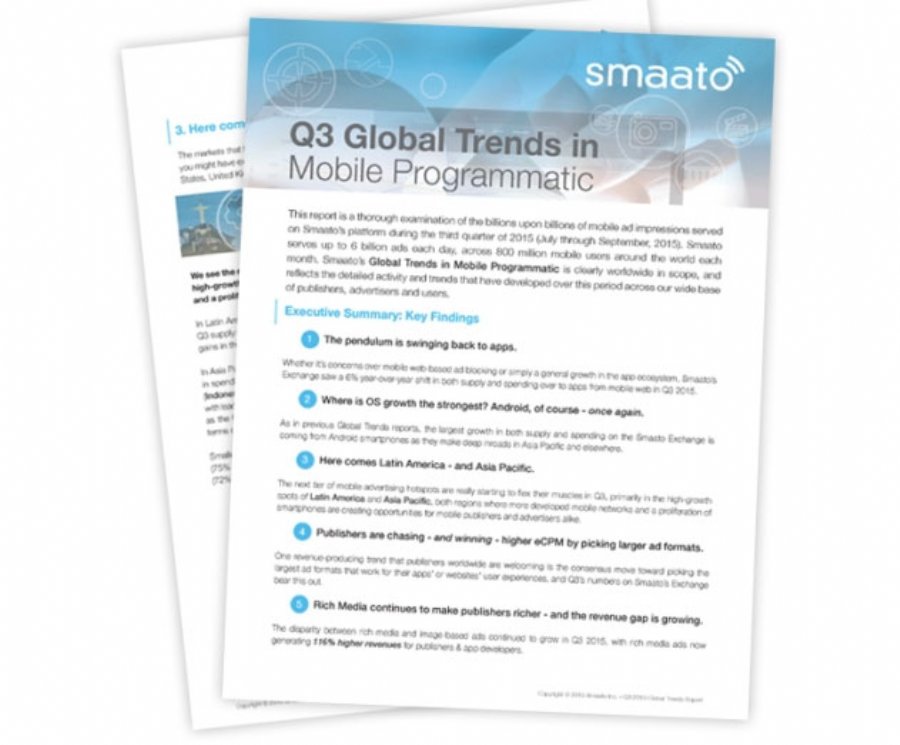 
11,369
According to a recent report, emerging markets in Latin America and Asia Pacific continue to offer high growth mobile advertising opportunities but the traditional powerhouses of the United States, India, United Kingdom, Russia and Germany are still dominating ad dollars.
The data comes from Smaato’s Q3 2015 Global Trends in Mobile Programmatic Report which analyzed data from billions of mobile ad impressions served on its exchange during the third quarter of 2013. Latin American growth was lead by a 91% increase in Venezuela and the Asia Pacific region saw Indonesia grow by 84 percent.
The strongest regions on the Smaato platform remain those with highly-developed mobile, advertising and commerce infrastructures, such as the US and Germany, and those with large populations and a mobile-first mentality, such as India and Russia.
Smaato found the continuing year-over-year shift away from the mobile web in favor of apps. The company predicts the shift could be a result of publishers directing users to apps to avoid ad-blocking software, which is primarily a mobile web issue. Smaato’s exchange saw a 6 percent positive shift in favor of apps in both supply (publisher inventory) and spend (advertisers’ spending on the Smaato exchange) during the third quarter of 2015, relative to the mobile web.
Other findings in the report include:
- The operating system with the strongest growth continues to be Android, with supply and spending increasing by 67 percent during the third quarter of 2015 from the year before.
- Larger ad formats result in higher eCPM. While traditional banners (320x50) are still growing, their rate of growth is dropping in favor of larger sizes like the medium rectangle (300x250) - up 85 percent - and the interstitial ad (320x480) - which grew 77 percent.
- Rich media continues to generate higher revenues for publishers and app developers - now generating 116 percent higher revenues than image-based ads.
The Global Trends in Mobile Programmatic Report reflects the detailed activity and trends that have developed across Smaato’s global base of publishers, advertisers and users. Smaato serves up to 6 billion ads each day, across 800 million unique monthly mobile users around the world, and works with 90,000 mobile app developers and publishers.