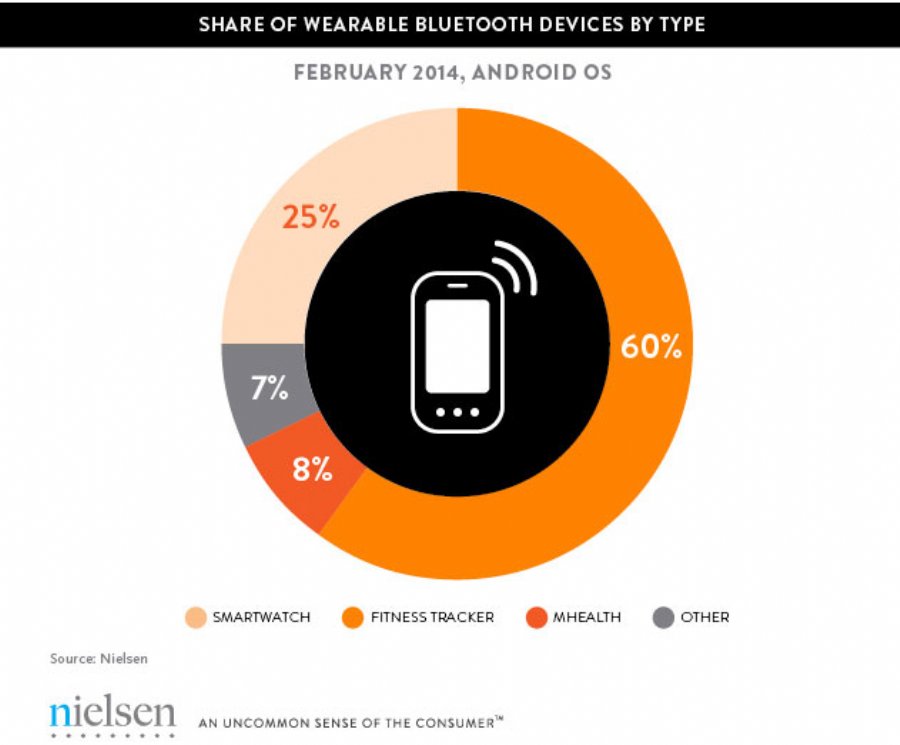 
3,124
Wearables may help identify power mobile app users according to a new study from Nielsen. The findings from the analysis shows that owners of Android-powered wearables are highly engaged smartphone users who access a variety of apps and use significantly more data than average Android users.
The analysis used Electronic Mobile Measurement (EMM), Nielsen’s on-device software which is installed with permission on panelist smartphones (approximately 5,000 panelists ages 18+, Android and iOS handsets).
Through EMM Nielsen was able to capture the actual usage of Android-powered wearable Bluetooth devices, identifying a surge in the use of wearable devices between September 2013 and February 2014. By February, 2.5 million of these users owned a wearable device, such as fitness trackers or smartwatches, almost five times more than in September 2013. In addition, these wearable owners used their devices an average of 14 times during the month.
60 percent of the wearable devices that are accessed via Android smartphones are categorized as fitness trackers and 8 percent are mHealth (mobile health) devices. Smartwatches, which also offer features that can be used to monitor one’s health, account for a quarter of the wearable devices owned by Android users.
Nielsen also points out that this increased use of fitness devices has also boosted the usage of fitness apps. It cites the top three fitness apps among wearable users in February 2014 which were Fitbit (1.6 million unique users), Calorie Counter & Diet Tracker by MyFitnessPal (429,000 users) and Nexercise (340,000 users).
Overall Nielsen found that wearable users are social browsers who browse the web, log-in to social networking sites, text message and tap in to location services more heavily than the average mobile user. They’re also more likely to use search services, email and maps. In February 2014 alone, wearable users spent 12 hours, 22 minutes on their web browser, 11 hours, 27 minutes on social networking sites, and 6 hours, 33 minutes text messaging on their devices, far more than the average mobile user.
Wearable device users’ constant connectedness is also visible by their overall data service and Wi-Fi usage. The average Android user is using 5.61 GB of data a month, while the average wearable Bluetooth device user is using nearly twice as much data, 9.49 GB. In addition, the average data volume per person on Wi-Fi network for wearable users is 74 percent higher than all adult Android users.