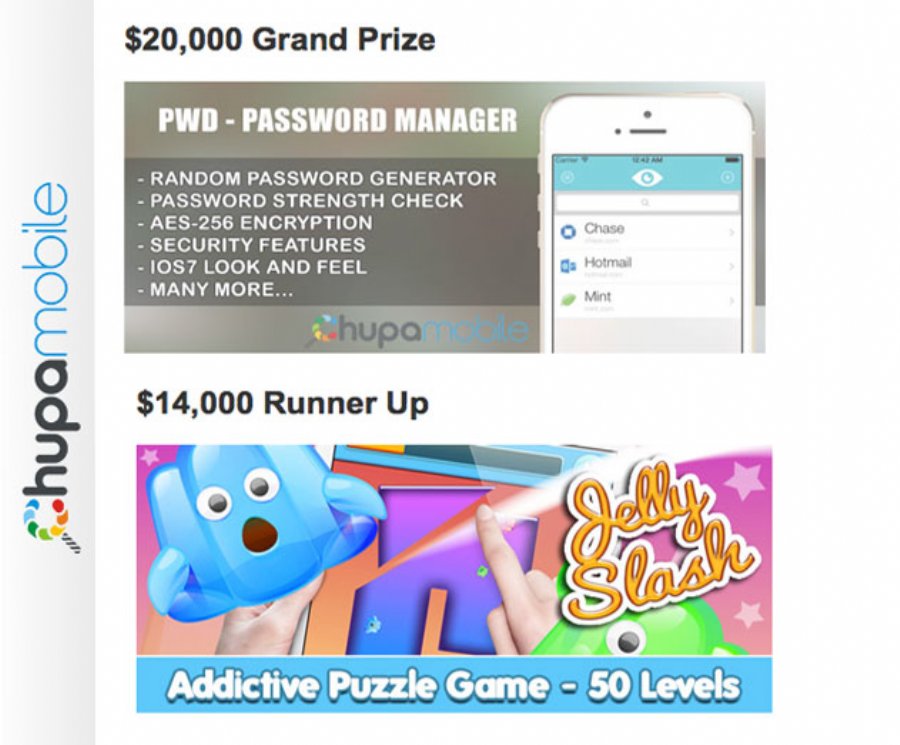 
1,970
Chupamobile has announced the winners of its 2013 Developer Competition. The winners were chosen from a number of submissions to Chupamobile’s online marketplace where developers buy and sell app source code packages and components for a variety of mobile development languages and frameworks.
Winning the top prize of $20,000 was PWD – Password Manager. An iOS project by Ricardo Funk it is a full application to create and manage passwords that comes with several “mini-apps.” The app offers a fully functional user interface that provides a great user experience including password strength checking, AES-256 encryption and a self-destruction security feature. The app sells for $17.99 in the iOS App Store.
Says Ricardo, “The Chupamobile competition was the perfect opportunity to complete the Password Management application I’ve had kicking around in my head for about a year. Knowing that I was competing against so many talented developers helped me push my limits and find the motivation to perfect every screen.”
The $14,000 Runner Up Prize went to the game Jelly Slash – Addictive 50 Level Arcade Puzzler built by RisingHigh. The iOS puzzle game is based on the ever popular game iSlash that got over 2.5 million downloads on the Apple App Store. Very easy to reskin, this project has four integrated ad SDKs and has been developed in Cocos 2d.
Placing 3rd and receiving $9,500 was WeLike – Photo Sharing Social Network, a source code developed by Planet1107. This is the second time that the studio headed by Goran Vuksic has won a prize in the annual Chupamobile competition. The project is an iOS and Android mobile app full of features including geolocation and nearby map view, user timeline, recent and popular posts feed and a complete photo editor.
For more information about the competition, visit the link below.