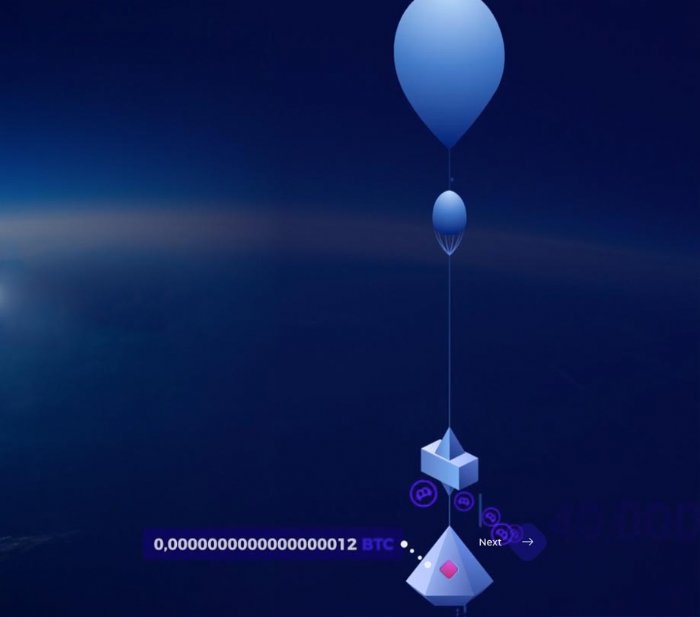 Bitcoin mining at the edge of space

Miner One has outfitted a high-altitude balloon with bitcoin mining equipment rising to more than 100,000 ft. into the Earth’s upper stratosphere as a symbol of bitcoin’s potential in 2018.

With bitcoin’s dramatic drop from last year’s highs of near $20,000 to $6,000-$8,000, it’s no surprise that popular enthusiasm has dimmed somewhat. But not for Miner One - a crowdfunded cryptocurrency mining company that is very bullish on bitcoin, looking to the horizon for the future profits that can be gained by a still promising investment opportunity.

The company, currently in the middle of an ICO, has outfitted a capsule and high-altitude balloon with specially-assembled equipment that will perform the data processing operations known as “bitcoin mining” at the edge of space.

They’re calling it “Space Miner One” and Miner One wants to remind people that cryptocurrency is really about the future and the revolutionary technology at its heart: so-called blockchain technology.

“We are bullish on bitcoin because it remains the world’s most popular and proven application of blockchain technology. And we see growing interest and adoption, despite recent market doldrums,” says Miner One CEO Pranas Slusnys.

And with a mini bitcoin rally in progress (bitcoin is up more than 30% since the beginning of April), Slusnys is no less optimistic about the prospects for mining bitcoin - albeit with professional efficiency.

“Mining bitcoin is about supporting the decentralized global network that makes cryptocurrency possible. It’s really another word for providing data processing for the global blockchain infrastructure, which will have many applications in the future not limited to cryptocurrency,” explains Slusnys, himself a 20-year data center industry veteran. “Short-term ups and downs notwithstanding, these networks will need efficient support centers like the kind Miner One is building.”

Industry experts are already predicting that blockchain technology will fundamentally change the way data is processed and stored around the world, making transactions simpler, cheaper, and harder to disrupt in everything from real estate and automobiles to produce, gemstones... even space travel. Mining centers like Miner One’s will take the technology to a new, more efficient level.

During its ICO, the company is expecting to raise approximately $10 million to build a cutting-edge cryptocurrency mining center in Northern Sweden, where electricity prices are Europe’s lowest, energy is abundant and 100% green, and air from the Arctic keeps cooling costs to a minimum. Miner One plans to locate its mining center in a former warehouse the company has leased in the town of Luleå, which is best known as the location of Facebook’s largest European data centre.