Blockchain is gaining momentum in the fintech industry


26,562
Blockchain is a secure funds transfer system. Essentially, it’s a shared-database technology based around a public ledger of transactions executed using the currency to which it’s connected. The blockchain acts as a permanent record of transactions, with recent transactions moving into a block, and once the block is completed, it is moved into a permanent database. These blocks are connected in chronological linear form—as the name implies, forming a literal chain of blocks.
While blockchain technology has created a stir for its potential impact on the finance industry, FinTech expert Monica Eaton-Cardone examines what it’s likely to mean for merchants and consumers by answering a few questions in an interview we recently did with her.

ADM: Beyond its use in bitcoin transactions, what are blockchain’s broader applications?

Monica: Banks and other financial institutions could leverage blockchain as a way to cut down on transaction settlement times, reduce costs, provide greater clarity and prevent system breakdowns, potentially reducing operating costs as much as $20 billion annually by 2022.

ADM: How many banks and corporations are currently using or exploring the technology?

Monica: Actually, banks including Citigroup and J.P Morgan Chase very recently started exploring blockchain technology, while the Nasdaq introduced their own proprietary blockchain-powered technology, Linq, at the end of 2015. Blockchain is gaining momentum in the fintech industry and I don’t see it slowing down.

ADM: What are some of the risks associated with blockchain technology?

Monica: There are certainly hurdles that will need to be overcome, including regulatory uncertainty, as well as the legal framework surrounding the technology’s implementation. Their being such limited experience with blockchain, risks may not be highlighted until it is at full scale. It’s a “what-if” game at this point, in that if an issue emerges and a high number of financial firms are involved, there is a higher risk of financial instability.

ADM: Why are blockchain transactions generally considered to be more secure and error-proof than existing processes?

Monica: Blockchain security methods use encryption technology. Although it is practically infeasible to break into the system, it is not impossible. The result of hacking would be very evident, meaning that any illegitimate changes could easily be detected and cancelled; however, this could undermine the integrity of the blockchain if it becomes regular practice to change the database, which is one of the industry’s primary concerns at this point in light of multiple high-profile hacks.

ADM: How were hackers able to steal $120 million in assets in the recent blockchain breaches?

Monica: Apparently the hacker had found that the smart contract created supposedly enabled them to create a “child DAO” by splitting the code and taking half. As it turns out, learning to read the small print when signing smart contracts was an expensive lesson.

What are the key value drivers for blockchain in the financial services industry?

Monica: Besides the cost reductions mentioned earlier, one would be the ability for an entire network to reach agreement about which blocks of transactions are valid and which are not. There is a huge potential for blockchain to transform the financial service industry in this regard. Financial institutions need to take a close look at how blockchain can disrupt their organization, and develop new ways to create added value.

ADM: How could blockchain technology potentially lower fees for consumers?

Monica: Blockchain could potentially allow for money to move securely across borders faster and more cheaply than current technology allows. It would make sense that, with merchant-reduced costs, there will be greater competition to reduce costs for consumers as well.

ADM: How can blockchain help to minimize false declines and fraud for merchants?

Monica: Blockchain’s fund verification and near real-time transfer and settlement allows for merchants to avoid missing sales due to false declines. Merchants can be alerted when customers’ funds aren’t available. This will reduce the rate of fraudulent transactions as well as false positives when it comes to detecting fraud. 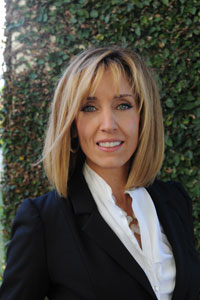 Monica Eaton-Cardone
Monica: While nothing is guaranteed to eliminate chargebacks, blockchain can go a long way in mitigating them.

Monica: Bitcoin transactions do not allow for chargebacks. However, it is not yet known whether blockchain products developed by major banks will keep the no-chargeback feature, as it’s less a matter of the specifics of the technology and more a matter of the implementation. In the end, only time will tell.

ADM: What are Monica’s predictions for the future of blockchain technology?

Monica: Blockchain is one of the most exciting new developments in the payment industry. I truly believe this will revolutionize digital payments, financial services and P2P money transfers.

ADM: What other FinTech developments are likely to transform the payments industry?

Monica:  One of the sectors in which we are likely to see very impressive growth in the next few years is in P2P lending. This is especially true in markets like India, Africa, the Middle East and the ASEAN economies, where payment card penetration is still relatively low compared to North America and Europe, but mobile device penetration is very high. This will disrupt traditional banking in these regions especially; as the banking sector continues to develop alongside FinTech, banks will have to evolve and grow on the fly in order to keep pace.