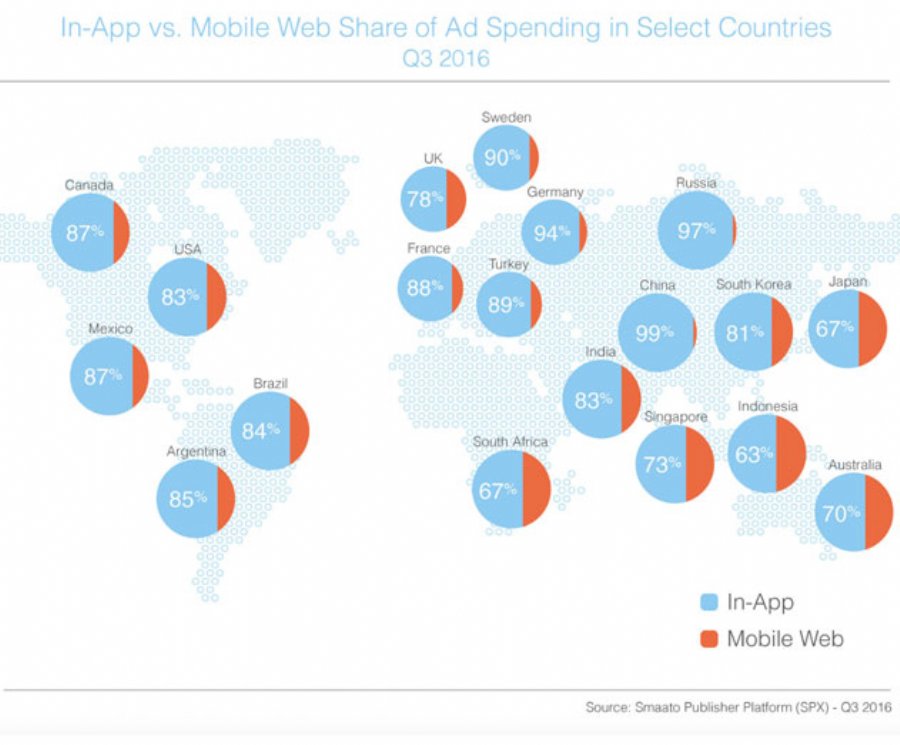 
24,392
As apple cuts iPhone production, Android beats iOS in mobile ad revenue for 1st time.
Smaato has released its Q3 2016 Global Trends in Mobile Advertising Report. They analyzed data from billions of mobile ad impressions served on its exchange during the third quarter of 2016 and found the extent to which mobile advertising spend is now heavily weighted toward in-app versus the mobile web. The new report shows that in-app accounted for 81% of global mobile ad spend compared to mobile web, and rose 8 share points versus the same quarter last year.
Even at the country level, the dominance of in-app versus mobile web advertising is a worldwide phenomenon. In mature mobile markets, such as the US, France, Sweden and Germany, in-app mobile ad spending represented 83%, 88%, 90% and 94%, respectively, of ad spend on Smaato’s platform in Q3 2016. In China, in-app represented 99% of total mobile ad spend. This trend is also seen in emerging markets, such as Brazil and India, where in-app spend garnered 84% and 83%, respectively.
Smaato credits the increase of in-app mobile advertising to increasing advertiser recognition that people are spending more and more time in their mobile apps and to the unique, superior and more reliable user tracking and targeting characteristics of the in-app mobile environment. On average, in-app eCPMs for publishers are more than two times higher than mobile web eCPMs on Smaato’s platform, a trend that has remained consistent. However, mobile advertising within web browsers is far from dying out, as it still accounts for 19% of all mobile ad spending on the Smaato platform and – while growing significantly more slowly than in-app ad spending – is nonetheless up almost 4% from the same quarter last year. Furthermore, mobile web eCPMs grew more than 10% on average in Q3 2016 versus Q3 2015.
Additional findings in the report include:
- Android dethrones iOS as eCPM king for the first time, accounting for 55% of global mobile ad revenue generated by publishers compared to iOS (41%), whose share is eroding.
- Men are from Android, women are from iOS. Ad requests coming from a male’s smartphone are 3x more likely to come from an Android device over an iOS device; when the ad request comes from a female’s smartphone, it’s 1.5x more likely to come from an iOS device versus Android.
- Video advertising takes off in Q3 2016, rising 557% in Q3 versus Q2. Video eCPMs grew 62% as well. Average video eCPMs in Q3 were more than 9 times higher than the average overall eCPMs on the Smaato platform.
- Global mobile ad spending continues to show robust growth (+64%) in Q3 2016, driven primarily by the Americas (+77%) and APAC (+64%) regions, followed by EMEA (+22%).