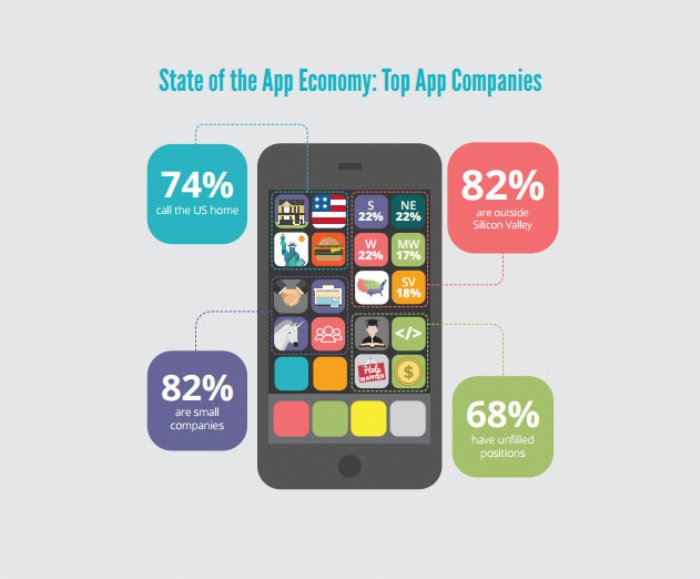 US Dominates in Numbers of Top App Publishers


24,777
A recent report by ACT | The App Association shows that the US still reigns supreme for the top app publishers. The annual report, titled the “State of the App Economy,” is in its fourth year.
According to the report, the $120 billion mobile app market is still being led by U.S.
companies, the vast majority of which are startups or small businesses. The low barrier of entry has democratized the opportunities within the app economy as the report shows that 82% top app makers are small companies and 13% are located in rural areas.
ACT|The App Association surveyed more than 500 top grossing apps across a range
of categories in the Apple App Store and Google Play, which represent the two largest app markets. A detailed analysis was conducted on each publisher to determine the greatest influences on growth and success in the app economy.
The report was conducted using publicly available data from the Apple App Store, Google Play, government agencies, company statements, and industry publications. For the purposes of the study, the small company designation coincides with the
Small Business Administration’s Table of Small Business Size Standards Matched to North American Industry Classification System Codes.
The report showed that digital trade is driving the App Economy growth. As the biggest digital trade partner for the United States, Europe and the U.S. are closely linked as nearly one-fifth of the top grossing, U.S.-based app companies have operations in Europe, as app makers are poised to earn more than $85 billion in the EU marketplace by 2018.