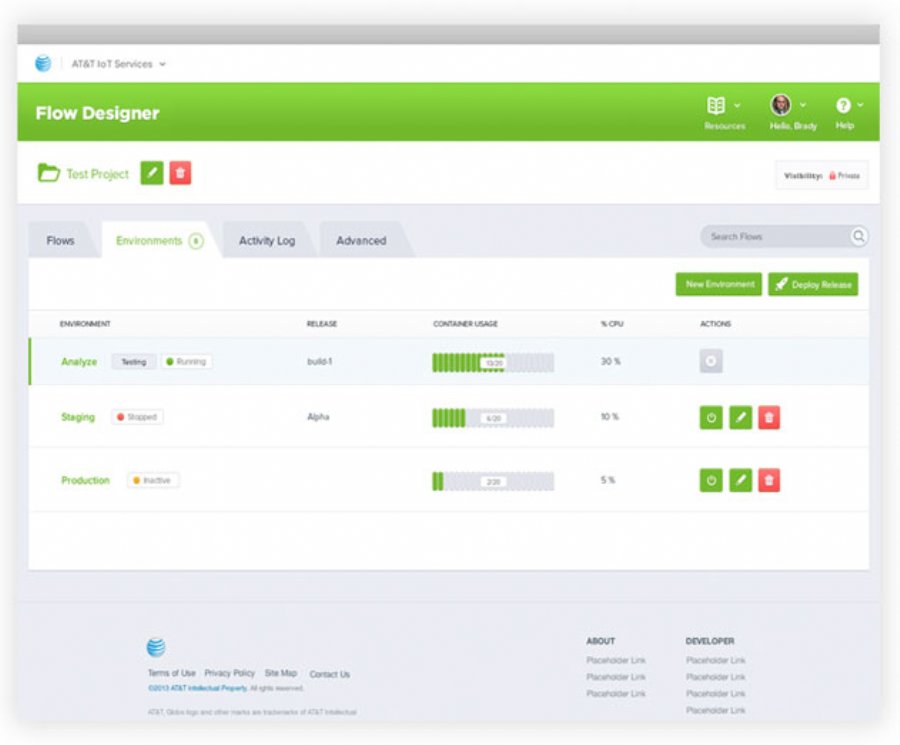 
19,840
Anyone who has ever created an Internet of Things (IoT) solution knows the pain of integrating the various parts of the software into a single functioning app.
In a typical IoT app you will most likely find logic for collecting data, transforming it, sending it to various services for processing or analysis, and finally storing it in one or more data stores. In many cases, the code for integrating the various services is cluttering the custom logic that needs to be applied in the specific IoT use case at hand.
Industry experts anticipate the Internet of Things will grow from 4.9 billion connections in 2015 to more than 25 billion by 2020. With the exponential growth of IoT there is a growing demand for developers to faster unlock/orchestrate data processing flows to extract meaningful information to grow a company’s IoT ecosystem.
IoT is expected to usher in a new age for Internet connected automation and create massive disruptions across a variety of industries. As computing power and universal connectivity continue to grow – the need for speed required to build new, complex IoT-focused applications increases simultaneously. Developers need the proper tools to break through the traditional processes and harness the true power of IoT while moving businesses forward.
AT&T’s Flow Designer is a cloud based development and execution platform for network connected IoT devices and applications. The AT&T Foundry team in Israel and members of the Technology and Operations team in the U.S. have created a cloud-based solution that enables IoT developers to turn their ideas into reality faster than ever before.
Essentially, developers with almost no IoT development experience can easily use Flow Designer to produce polished IoT prototypes and move them into production. That equates to less barriers for businesses and developers who want to take advantage of IoT solutions and provide valuable products for consumers.
Three Values of the Cloud-based Tool
- Rapid, browser-based Application Development
- Application Deployment at a single click-of-the-button
- Simplified production support, resiliency and scaling solutions
Tools like this provides a design-time and runtime environment built from the ground up to provide developers a smooth experience in designing, implementing, deploying and scaling IoT apps. Some of the key features of Flow Designer:
- Enables drag and drop development and custom code creation to build IoT solutions.
- Run-Time environment provides an elastic, on-demand platform as a service tailored to the Internet of Things.
- It is GIT based. Many IoT projects are GIT projects, to allow enterprise-grade source control management
- It is a development environment for message driven apps, so it naturally fits IoT development
- It provides visual editor for authoring data flows in a drag and drop manner (based on the popular open source node-red project)
- It has a rich set of built in components (called nodes) allowing to easily connect to any data source in any protocol
- It is tightly integrated with other AT&T IoT cloud services, such as M2X Data Service for time-series data and AT&T Control Center.
- It is highly extensible, and provides a well-defined interface for adding new functionality or integrating legacy code
- It is based on open-source Node-Red technology.
This is good news for IoT developers, who can now leverage Flow Designer to create scalable IoT apps that utilize AT&T networking infrastructure – a critical piece of the IoT puzzle. This allows developers to dramatically reduce the time spent integrating the various services, and focus on the custom logic that needs to be applied in order to create the app.

Read more: http://about.att.com/innovation/foundry/flowdesign...This content is made possible by a guest author, or sponsor; it is not written by and does not necessarily reflect the views of App Developer Magazine's editorial staff.