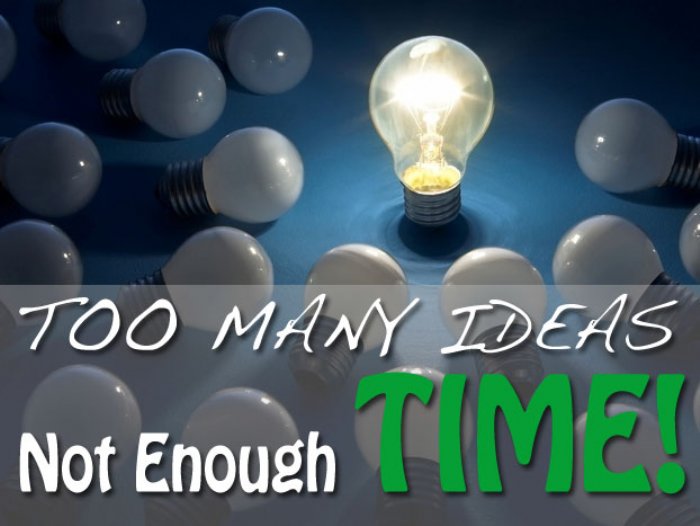 Too Many App Ideas and Not Enough Time


1,579
I keep a running list of all ofthe app ideas I think of on myown. Some good, some really good, some horrible - but whenever inspiration strikes I whip out my iPhone and title the app and give it a rough description, enough so that at some other point in the future it can be developed.
The other day I opened my list and found hundreds of entries! I tried to go back through them all to delete the really bad ones and make sense of the tapestry of ideas but couldn't bring myself to deleting a single one. But when will I ever get the time to bring all those ideas to market? Likely never, but it's still a bit fulfilling to have the ideas written down in a place that I can refer to when I need to remember something I had thought of.

The app industry has one thing in abundance and that is ideas. Everyone has got em! They are free and usually come out of the clear blue sky, or after spotting the need to "fill a gap" in a certain area of your life. Unfortunately the one thing none of us have on our sides the time to develop them all! So with all of the ideas in the world, but not nearly enough time to develop them what are you todo?

I think you need to first decide which idea you are most passionate about, then go develop it. Passion drives us all to oner hing or another and when surfing the app store it's easy to pick out the apps that developers are passionate about and which ones are just "idea place-holders" in the market. You know, those apps that could be something really great if it wasn't so half-baked.

So how do you spot the idea that you are the most passionate about? There are basically 4 things that will identify this for you.

1) It's the first thing you think of when you wake up in the morning.

2) You can't really go to sleep because you can't stop thinking about it.

3) You spend a lot of time reading about it, or telling others about it.

Apps are really nothing more than a piece of software that install onto a mobile device. But"apps" or "applications" have been around a very long time. Apps usually solve a problem or bridge the gap between a piece of hardware and human interaction.

Today's devices are so insanely complicated and capable it's almost impossible NOT to think of how it can be used in a new way, hence the idea scrapbook is born. Being passionate about an app idea can also come with a dark side too, though. The rule of "just because you can do something, doesn't mean you should comes to mind here. I've seen apps that were clearly built well, marketed well, and seemed like a novel idea, but never go anywhere because it was a passionate idea that only one person was actually passionate about.

The point I'm trying to make is this: When you find the idea that makes you feel giddy and all warm inside, stop and ask some other people what they think without giving away too much of your idea. It might save you hundreds of hours of work, thousands of dollars, and your time that could be spent on another idea from your notebook that might be much more successful and keeps your passion moving onward.