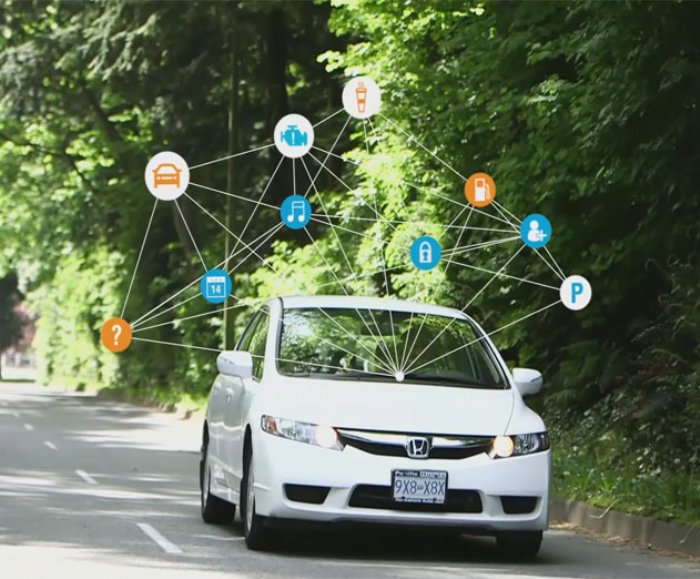 
7,423
Smartphone, smart home, smart car: all buzzwords that indicate the Internet of Things is becoming a mainstream topic as people strive to simplify their lives and seamlessly connect to the information, places and people that matter to them most. The average American owns 1.35 sim-card enabled mobile devices.
Yet, the car is lagging behind when it comes to being able to take advantage of its own data or connecting to things like automotive services providers, parking payment systems, insurance or roadside assistance providers.
Automakers understand the opportunity of the connected car and are rapidly building their own proprietary systems or working to integrate with Apple Carplay or Android Auto. But for the most part these only allow drivers to run their apps on the car’s onboard infotainment systems.
At Mojio, we do not see this as a true connected car. A connected car should utilize and react to contextual and ambient information about the driving experience. It should address the tens of millions of drivers who aren’t looking for a new car within the next fiveyears. And it should address individual needs and preferences.
What’s the opportunity?
There are more than 250 million cars in North America and at least 800 million worldwide in the aftermarket. Most drivers keep their cars for around 11 years. There are more than 23 million connected cars on the road right now (Forbes) but only 500,000 of those - less than two percent - are accessible by developers to create new apps and services. But this number is expected to grow by 2020 to 250 million – presenting a real opportunity for developers looking to expand beyond smartphone or smartwatch apps.
With the convergence of high-speed, low-cost wireless networks and the saturation of smartphones, Mojio saw an opportunity to design a device-based solution for the connected car. We utilize the cars’ On-Board Diagnostic (OBD) Port to open up the car to the entirety of the Internet.
We have built an open platform and API so developers can start writing apps that allow cars to talk to apps on the owner’s smartphone or smartwatch. With an open platform, developers don’t need to understand 50 car makes or 10,000 models. As one example, in-depth technical information such as the average fuel consumption of a Ford Escape or a Toyota Camry has been abstracted away, making it so that developers can easily extrapolate how much fuel is remaining.
Apps for cars make life easier
The use cases are many and varied. Trip evaluation can assist with many aspects of a given trip, from providing average speed and distance, to connecting a driver with parking and roadside assistance in case of an accident or breakdown. Diagnostics and maintenance data can anticipate potential issues.
Do you need to take your car in for a service? How much should you expect to pay and where is your nearest garage? Distracted driving is another huge opportunity - in many states it is now illegal to text and drive, but how many drivers send that quick text to update on their arrival time or that they’re stuck in traffic? A connected car device with contextually-aware, hands-free apps, can help improve the driving experience in all of these scenarios.
The early bird gets the dollars
As a developer looking to tap into this burgeoning connected car opportunity, being early really does matter. There are over 1.2 million apps in the app store today, but the connected car category is still in its infancy. In addition, the same price sensitivities to building traditional apps do not exist in this category.
In the age of iTunes, apps are 99 cents or even free. But the car economy is much bigger with consumers spending an average of $9,000 per year, including service, insurance and maintenance. If your car makes a strange sound, you don’t think about it being a 99 cent problem and expect to pay much more. Therefore, developers can charge a higher price point for service apps that are considered essential to the driver.
Connected car is a Greenfield opportunity
Alongside building our own open platform and our own apps, we work with many Fortune 500 companies and service providers on their own connected car solutions and services. We are building a connected car ecosystem and often connect developers with companies where a match makes sense to facilitate the growth of the ecosystem.
So while many app developers are comfortable building apps for the smartphone, there is a whole new world out there. The business case for connected car apps is growing and with open platform companies having already done the heavy lifting, there really is no barrier to entry.
The only question now is what’s the next killer app idea?