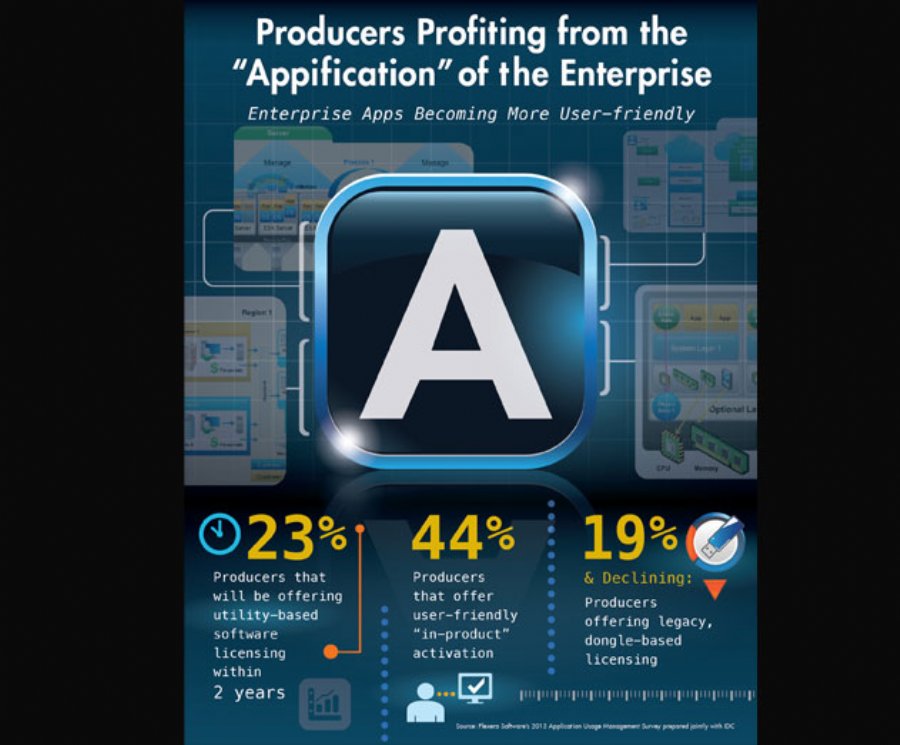 The Appification of the Enterprise: The Application Itself Takes Central Stage


1,882
A new research study has revealed that enterprise application producers are transforming their business models to profit from the appification of the enterprise. In an “appified” enterprise the application itself takes central stage.
Now in its ninth year the 2013-14 Key trends in Software Pricing and Licensing survey was conducted by Flexera Software with input from IDC’s Software Pricing and Licensing Research division. This annual research project looks at software licensing, pricing and enforcement trends and best practices. The survey reaches out to executives at application producers (software vendors and intelligent device manufacturers) and enterprises who use and manage software and devices.
In total 1,828 respondents participated in the survey, including 430 enterprise participants and 1398 application producer participants. 41% of the enterprise respondents were from larger enterprises of $1 billion or more in revenues and 27% were from companies with $3 billion in revenues or more. Among other places, 56% of respondents were from North America, 28% were from Europe, and 7% were from Australia.
The report shows that in an “appified” enterprise, software use is task-oriented allowing employees to focus on specific things activities. To profit from task-oriented apps, producers need to alter their monetization models to focus on those task-oriented, usage-based activities. 17 percent of respondents indicated that they now offer utility software licensing models – up from 9 percent in last year’s survey.  And that number is expected to grow to 23 percent over the next two years.
According to the report, producers are simplifying their access and activation models saying that users want app-store-like, one-click software access and activation rather than more traditional, complex license activation models like email or website activation, which require several-step processes. Over 44 percent of respondents, up from 29% in the 2012 survey, reported that they now distribute license keys/files via in-product activation.
And respondents reported that they are doing away with legacy licensing technology such as software dongles, which require hardware, to access the software. Only 19 percent of respondents report using hardware dongles as their licensing technology; down from 27 percent last year. Of the producers that indicated they’re planning on using dongles over the next two years, 21% said their dongle use would decrease.
There are a number of other findings in the report, which can be downloaded on the Flexera Software website.